The Flynn Creek impact structure is a ~4 km complex crater located about 20 km (12 mi) northeast of Cookeville, Tennessee. The crater one of the earliest recognized impact structures on Earth, and is perhaps the best studied example of a "wet target" crater. The impact occurred in a shallow tropical sea ~360 million years ago (late Devonian), and its rapid burial by marine sediments helped preserve the crater from further erosion. From the air, Flynn Creek crater does not have a spectacular surface expression. The strongest tell is a series of arc-shaped valleys that have cut around the harder rock exposed in the impact's central uplift, and a partial ring of arc-shaped valleys developed in faults along the crater rim. I've outlined the general shape of the crater on an aerial map. 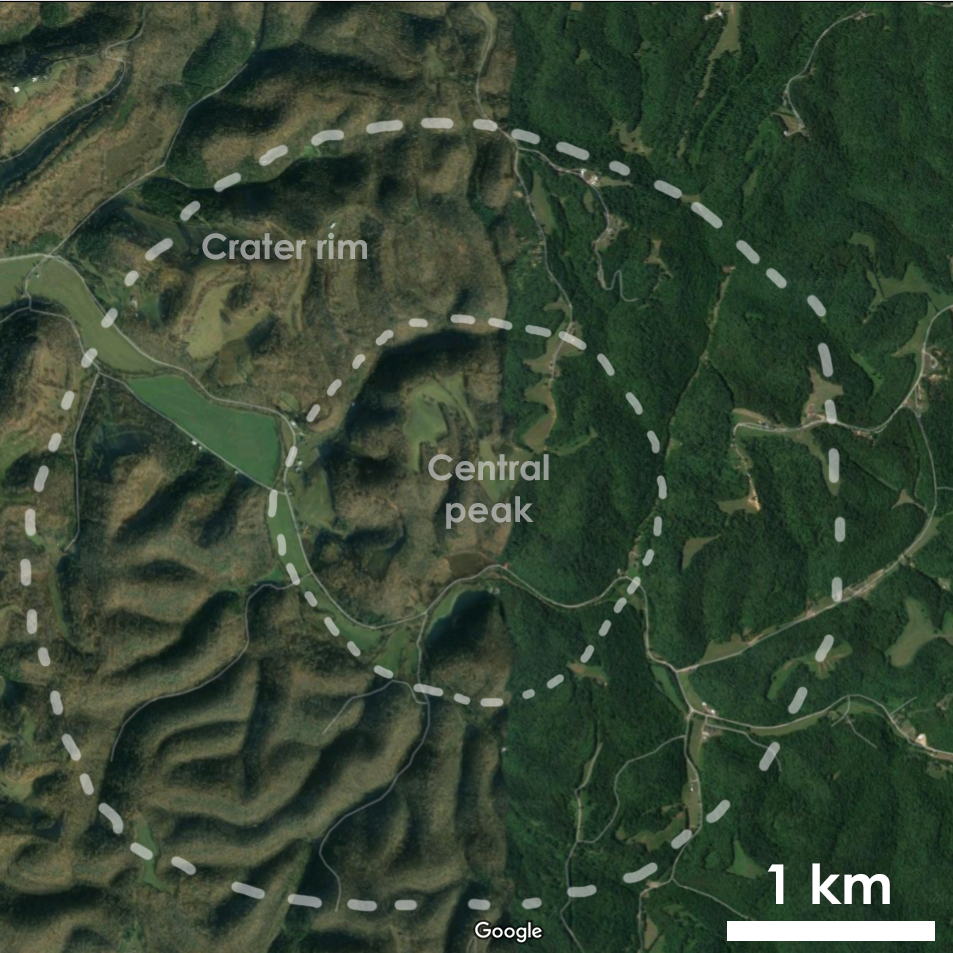 However, the crater does have particularly good exposures of rocks deformed by the impact along its rim and central peak. The highly deformed rocks were noticed as early as 1869 by James M. Safford, but aside from a brief mention in his report regarding the state's geology, appears to have paid it little attention. US Geological Survey mapper R.G. Lusk determined the structure's general age in 1926. He noted that the late Devonian Chattanooga Shale - nearly non-existent outside of the crater - suddenly reached a depth of up to 30 meters within the structure, suggesting that the structure was present before its deposition. Lusk also noted the presence of shattered limestones, which he used to interpret the structure as a large sinkhole formed by a collapsed cave system. Charles Wilson and K.E. Born studied the site in 1936, concluding that it was a "crypto-volcanic" structure, a generally used to describe highly-eroded and poorly-defined volcanic features in the geologic record.

Robert Dietz (US Geodetic and Coast Survey) was the first to notice the similarity between the structural features of Flynn Creek and lunar craters, arguing in 1946 that it more strongly resembled "explosion craters" on the Moon than terrestrial volcanoes. However, Flynn Creek was not definitively labeled an impact crater until the Edward Chao's and Gene Shoemaker's discovery of high-pressure minerals found at Meteor Crater in Arizona and Nordlinger Ries in Germany. This provided the first conclusive evidence that many "crypto-volcanic" strucutres were formed via impacts. The strong similarity between Flynn Creek's structure and lunar craters made it one of the first six craters studied and confirmed as terrestrial impact sites.

Starting in 1963, David Roddy (then a graduate student at Caltech working for Shoemaker) mapped the surface geology and structures present within the crater. After graduating, he continued his work at the crater through the USGS, which at the time was funding large amounts of work to study sites useful for the Apollo program. Roddy's work provided a then-unprecedented look at the overall structure of a small, complex crater. The good exposures of impact structures that had drawn the attention of geologists decades earlier became an essential training stop for astronauts on their way to the Moon. During the mid-60s, Shoemaker (now in charge of training astronauts in the earth sciences) brought several astronauts to Flynn Creek for fieldwork during the mid-60s.

Roddy oversaw the collection of 18 cores drilled at various locations within the crater between 1967 and 1979. The 3.8 km of core samples collected through this work provided insight into the dynamics of crater formation and modification. Some of these processes include shock metamorphism and impact melt generation in carbonate rocks, melt-generated hydrothermal systems that continued to operate long after impact, and modifcation during "resurge" (reflooding of the crater in the minutes after impact). These cores also provided the first good look (here taken from Roddy, 1980) at the preserved crater underneath the deposits of shattered rock and sedimentary rock Roddy allow us to determine the shape of the crater in the subsurface by finding the depth to rocks underneath the crater fill: 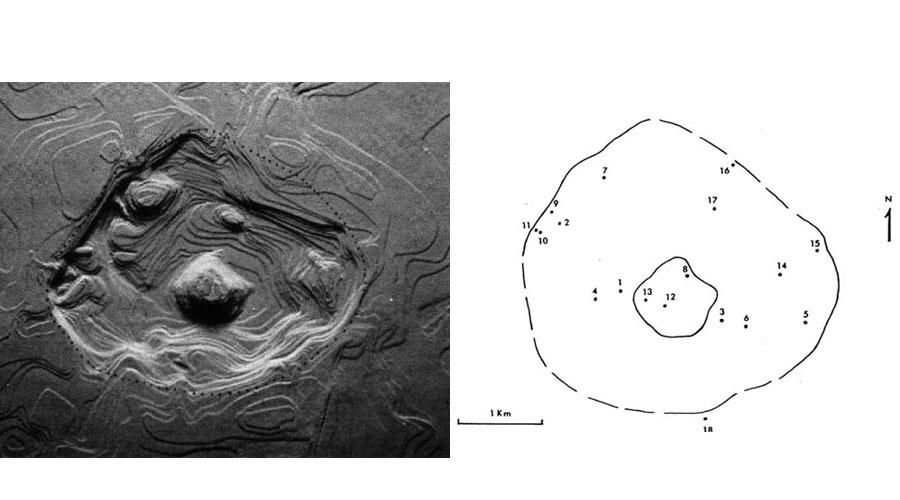 The entire collection of core samples have actually been imaged and are available online via the USGS. They're really spectacular and I encourage you to dig through these photos if you have some time!

In April 2018 I attended a field trip to Flynn Creek crater led by Steven Jaret and David Kring. Unfortunately, the Tennessee spring weather was non-cooperative, and a tornado warning partway through the trip forced the cancellation of a couple planned stops. The gloomy weather also meant that a large number of my photos didn't turn out too well. But I do have a couple photos worth sharing!

We started out the day from our hotel in Knoxville. The first part of the day was taken up by the roughly two hour drive to the impact site. Our first stop was a roadcut showing the contact between the late Devonian Chattanooga shale and the overlying early Mississippian Fort Payne chert. These rocks show no sign of being affected by the impact, telling us that the impact must have occurred before they were deposited. 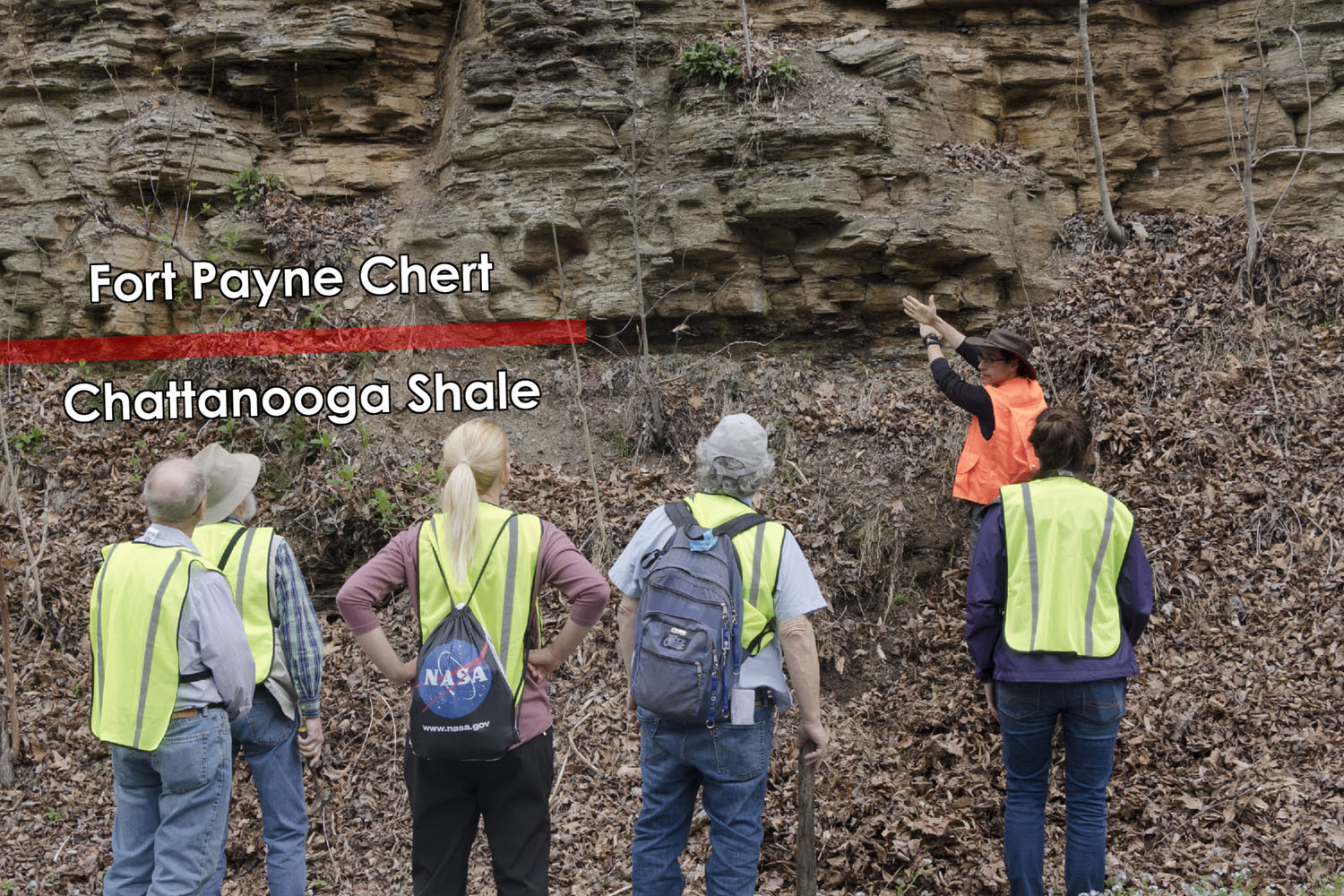 Our next stop was at an exposure of the Cathys-Leipers Formation, a Middle Ordovician limestone unit. (This name actually refers to two separate limestone formations, but in much of central Tennessee the two are difficult to tell apart, so mappers working in the area commonly lump the two together.) These rocks are located just outside the outer rim of the Flynn Creek structure. They also contain a small thrust fault. 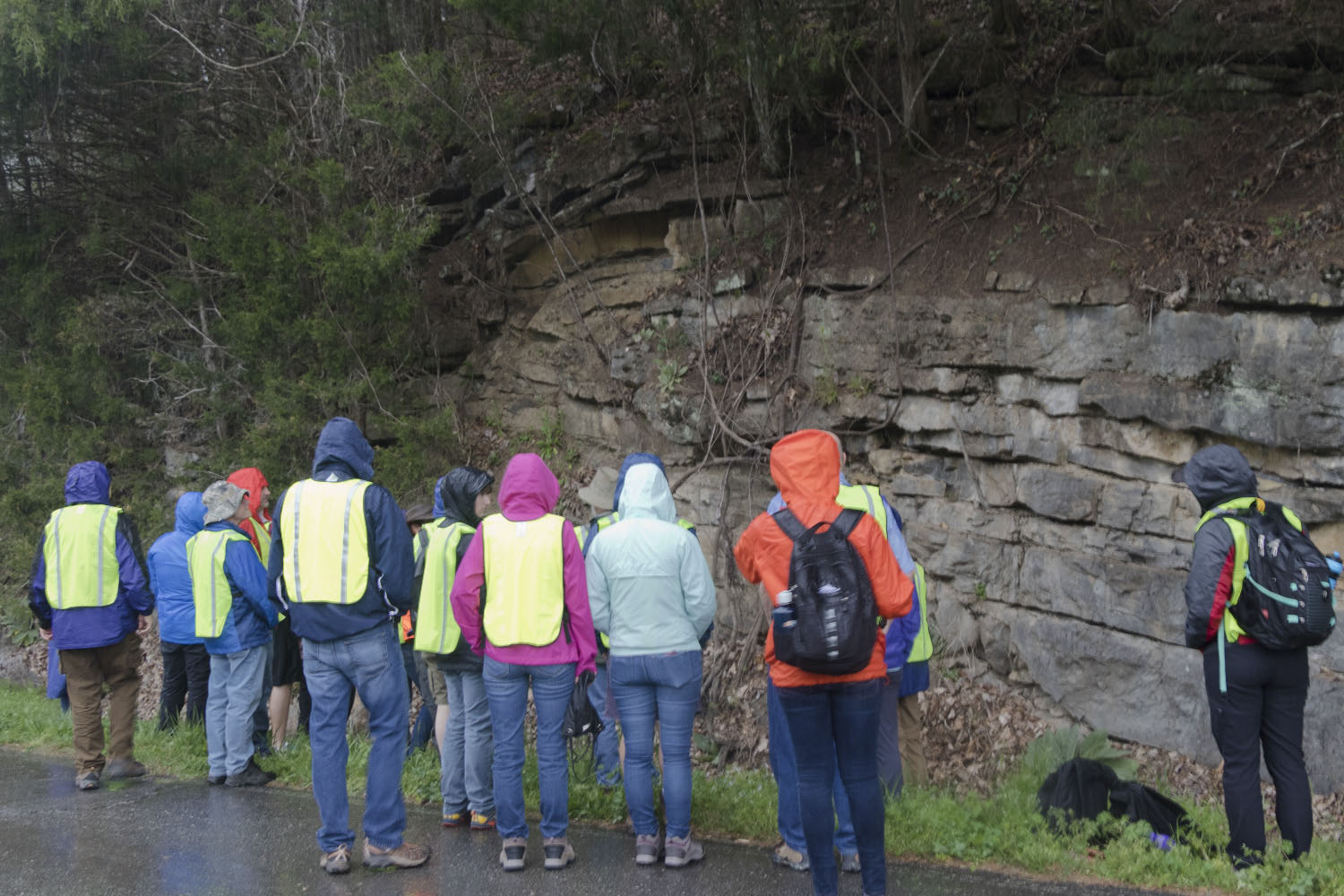 Here's an annotated picture pointing out the fault. The upper tip of the fault contains a well-developed drag fold, which gives us a sense of motion for the fault. Drag folds form where layered rocks sliding along a fault temporarily "grab" the rocks on the other side of the fault, causing them to bend as rocks further from the fault continue moving. The drag fold here tells us that this fault is a small thrust fault, formed when rocks were compressed and pushed over the top of one another. 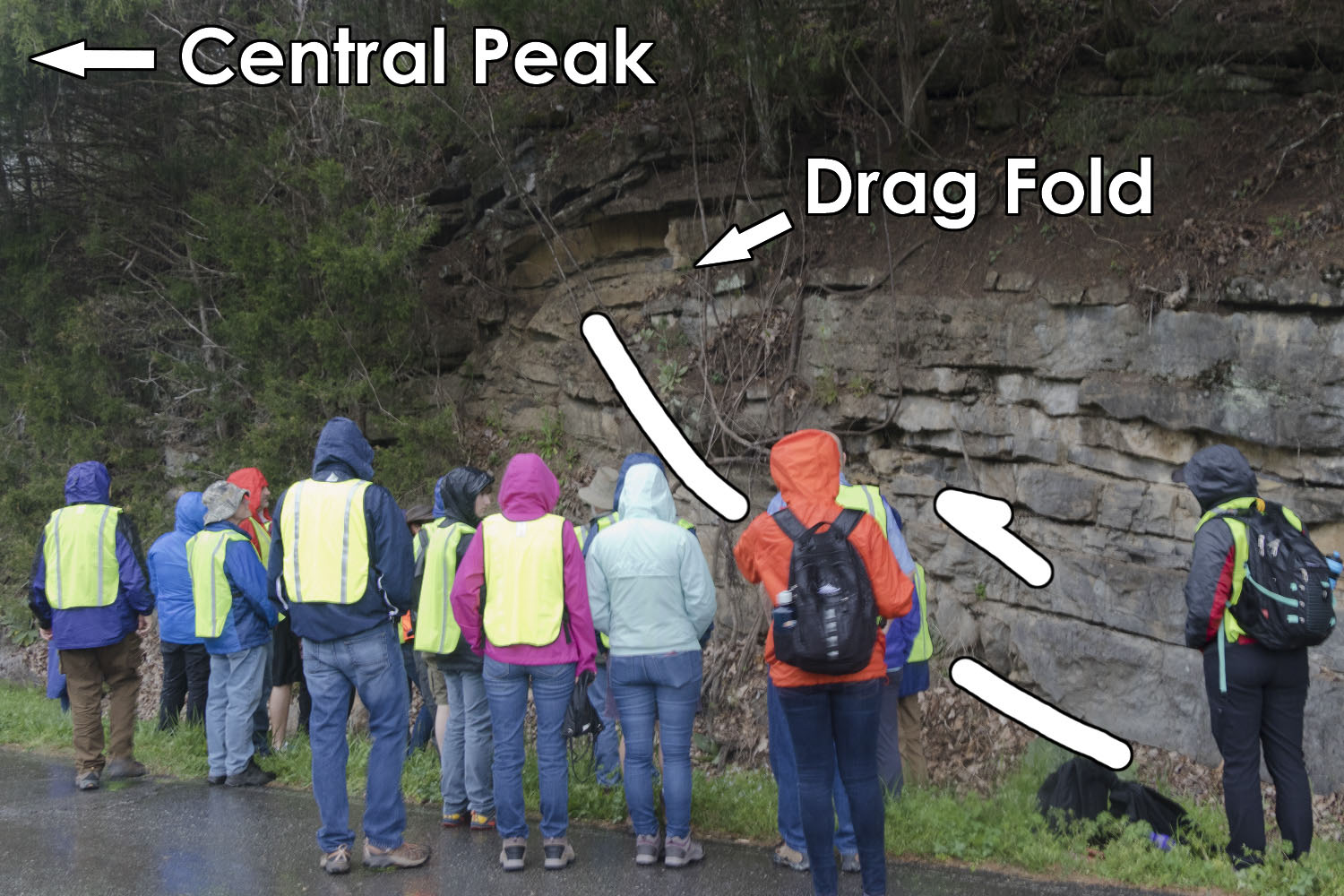 Interestingly, the rocks appear to have been thrusted towards the center of the crater. However, this is because the fault probably long postdates the formation of the crater. Several other faults with a similar orientation can be found in the area, all roughly perpendicular to the foreland fold belts of the Appalachian Mountains. The otherwise flat-laying rocks here suggest that this happened during the last period of uplift in the Appalachians between 260-325 million years ago.

The first two stops were intended to familiarize ourselves with undeformed versions of the rocks that we would see later. However, it was not to be. Just as we were leaving the second outcrop, it began raining heavily, followed moments later by a tornado warning being issued. Due to the weather warning, we decided to drive to a nearby church parking lot to have an early lunch and gage what the weather was doing. We ended up waiting about 45 minutes for a line of thunderstorms to pass, which ate into the time scheduled for our third stop to examine deformed exposures of the Cathys-Leipers formation outcropping along the outer wall of the crater. Our next stop instead was the central uplift of the crater.

We arrived at a small farm, where the owner came out to greet us and learn something new about his land. Right next to where we parked was a moderately tilted exposure of the Chattanooga Shale. 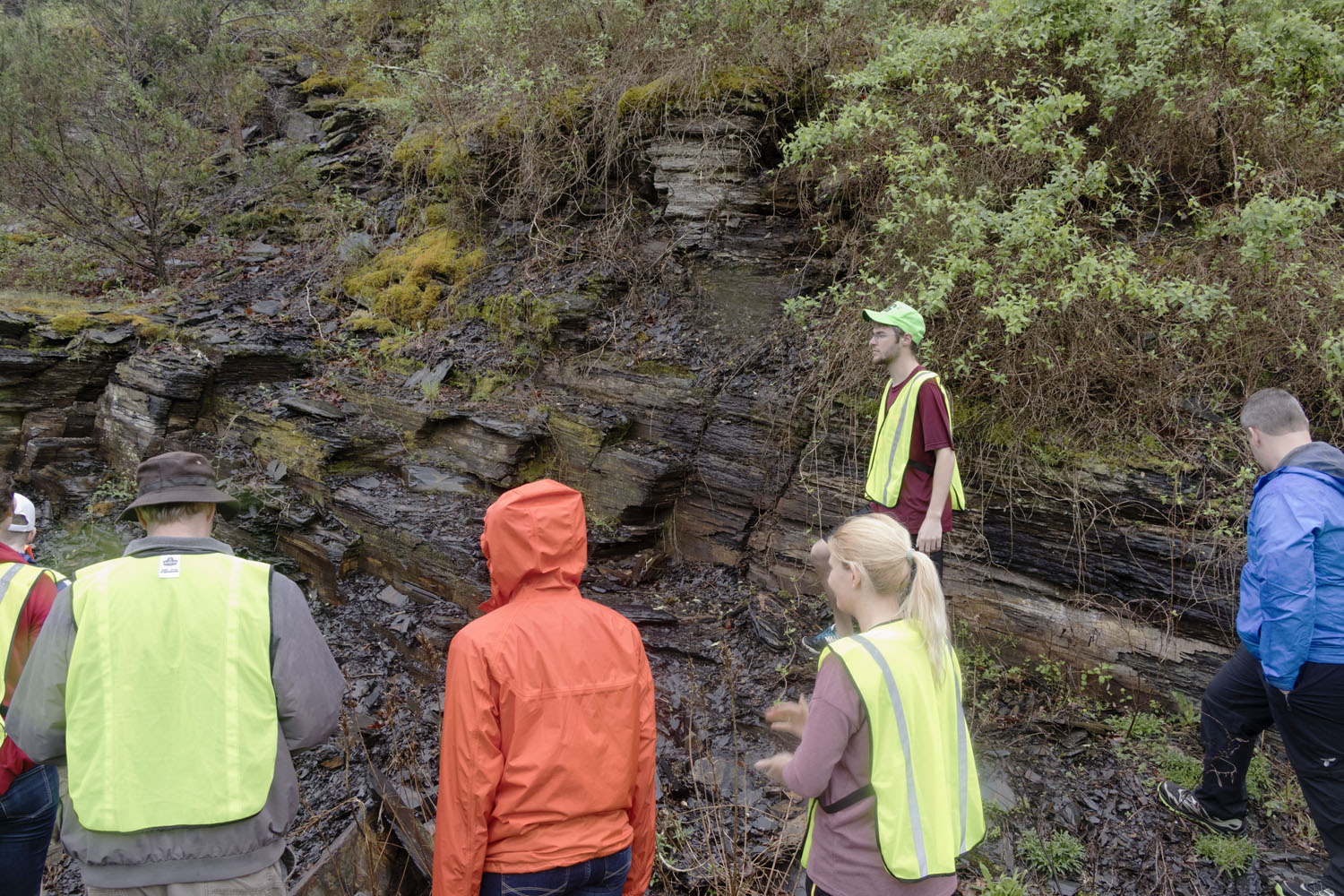 This exposure is located only a couple meters above the steeply dipping breccia deposits on the surface of the central peak, and their tilt likely comes from the steep slope they were deposited on top of. These shales also have a strong tectonic imprint from the same period of mountain-building that created the small thrust fault. The shales here contain a very well-developed set of clevage planes. 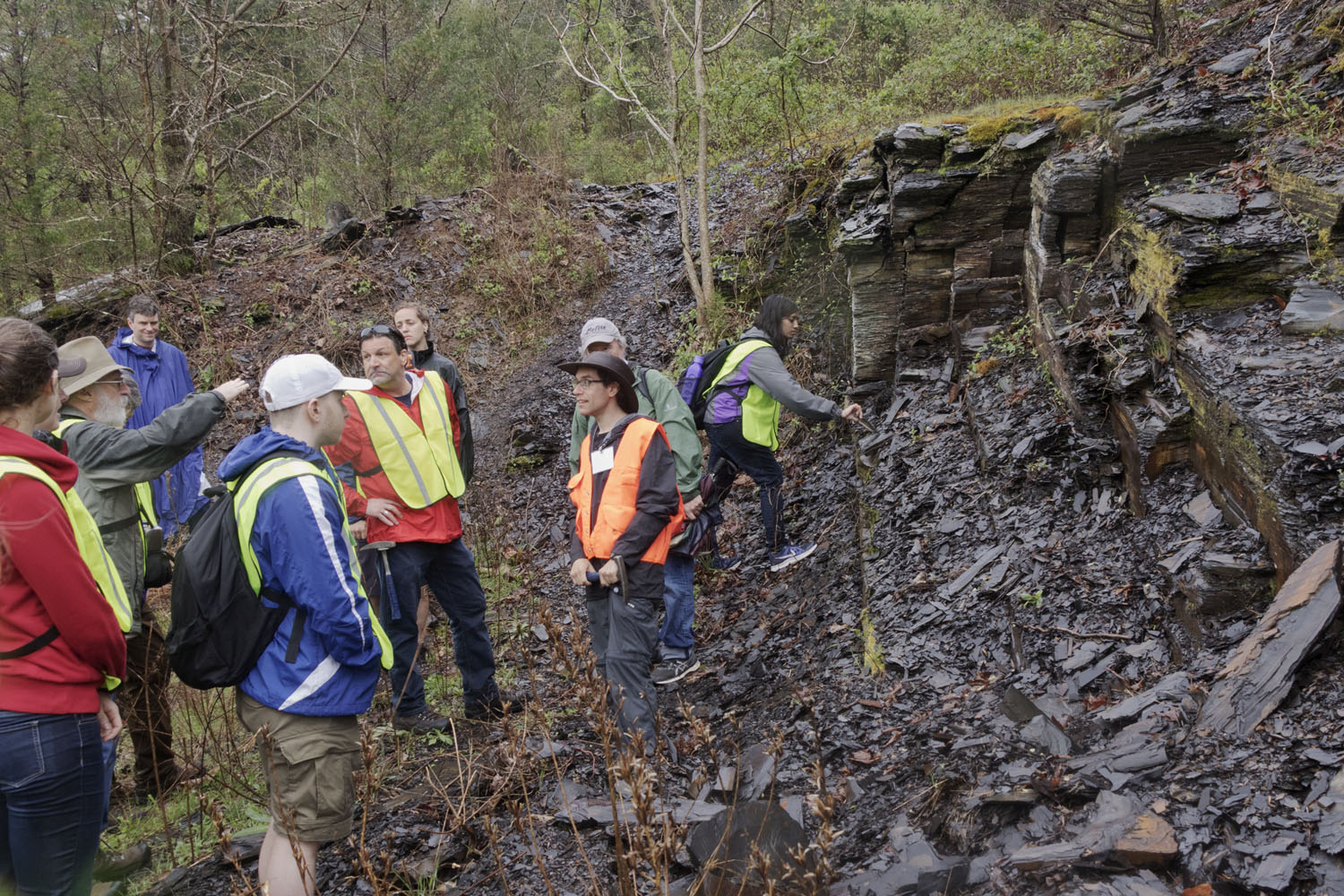 We received a short overview of the central uplift. These rocks are composed predominantly of late-Cambrian/early-Ordovician limestones and dolomites of the Knox Group. These rocks have been uplifted by as much as 450 m (~1500 feet) relative to their position outside the crater. These rocks were uplifted by the upward flow rocks at the center of the impact site due as they rebounded from the force of the impact. The uplift contains shattered rock mixed with impact-generated melts that were immediately quenched by seawater flowing back into the crater. The breccia exposed in the central peak has been divided into two dominant types: the "lower" breccia that consists primarily of shattered rock with small amounts of melt low on the peak, and the "upper" breccia composed mostly of melt with small clasts of limestone.

Then we began to climb. The central uplift is very steep! 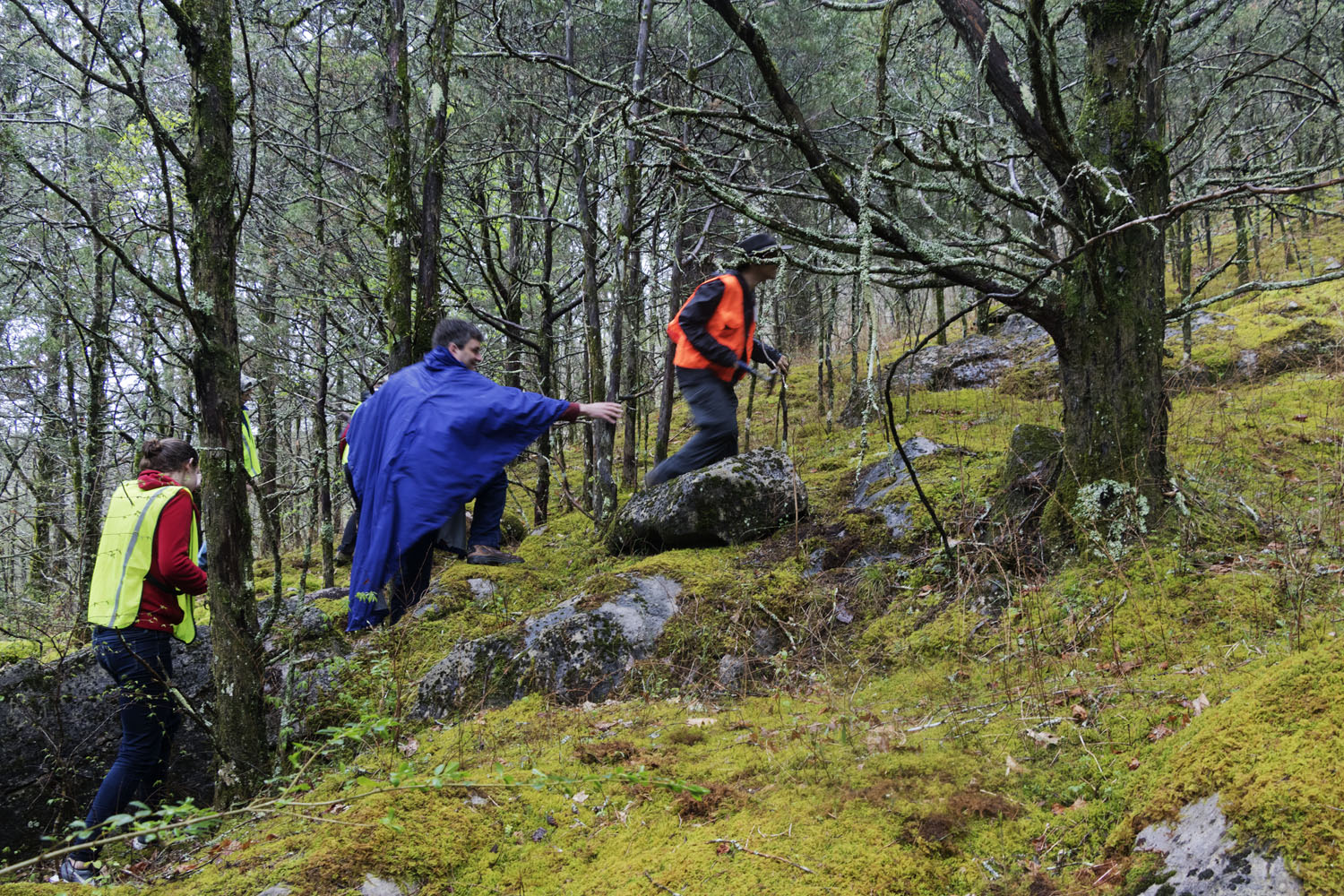 The breccias exposed in the central uplift have a really cool erosional texture. It appears that the melt erodes faster than some of the small clasts of solid limestone encased within, leading to textures that look like this: 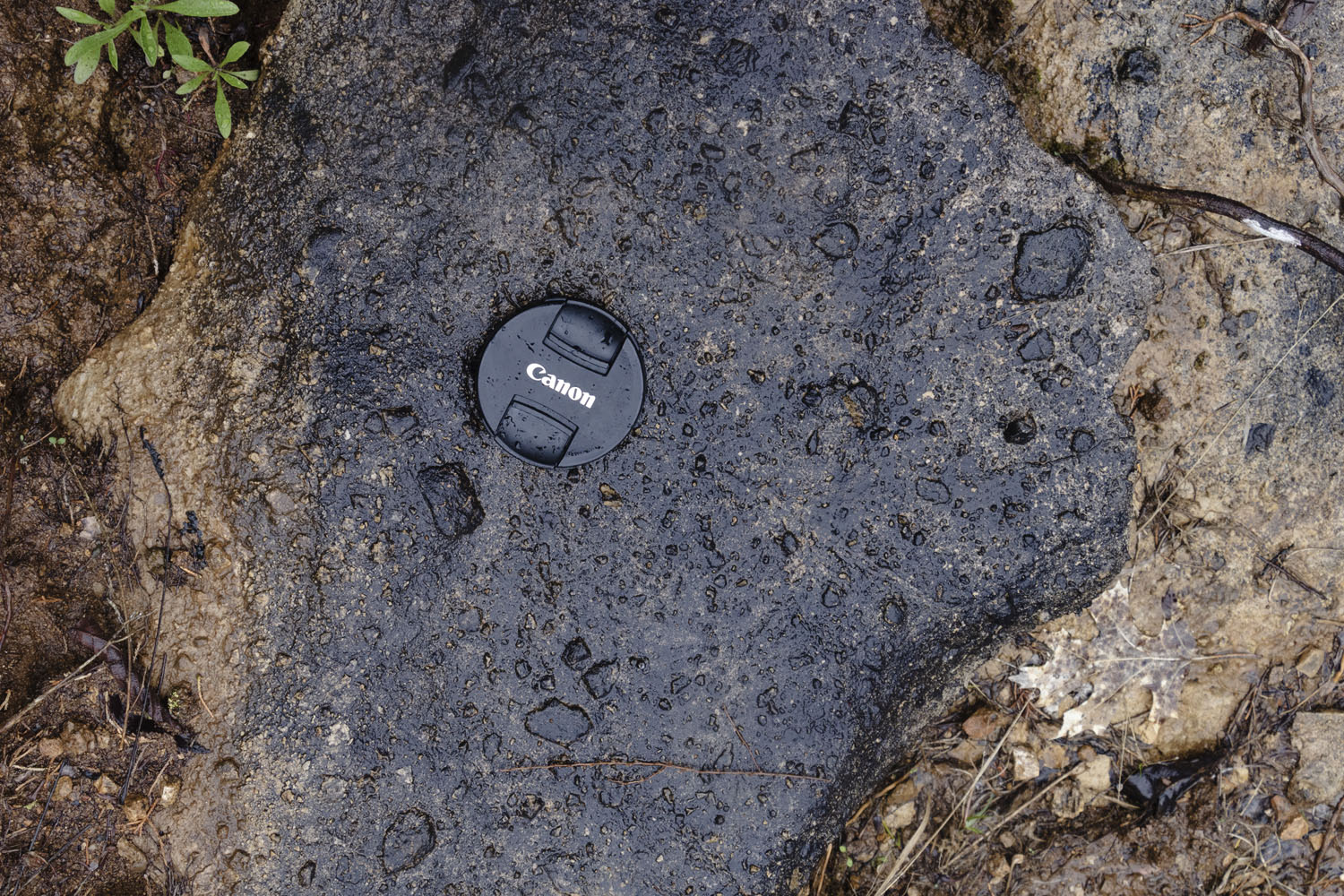 However, this erosional texture doesn't capture the density of clasts that are really present. Temporarily peeling off the moss gives us a better look at a fresh surface of the "lower" breccia: 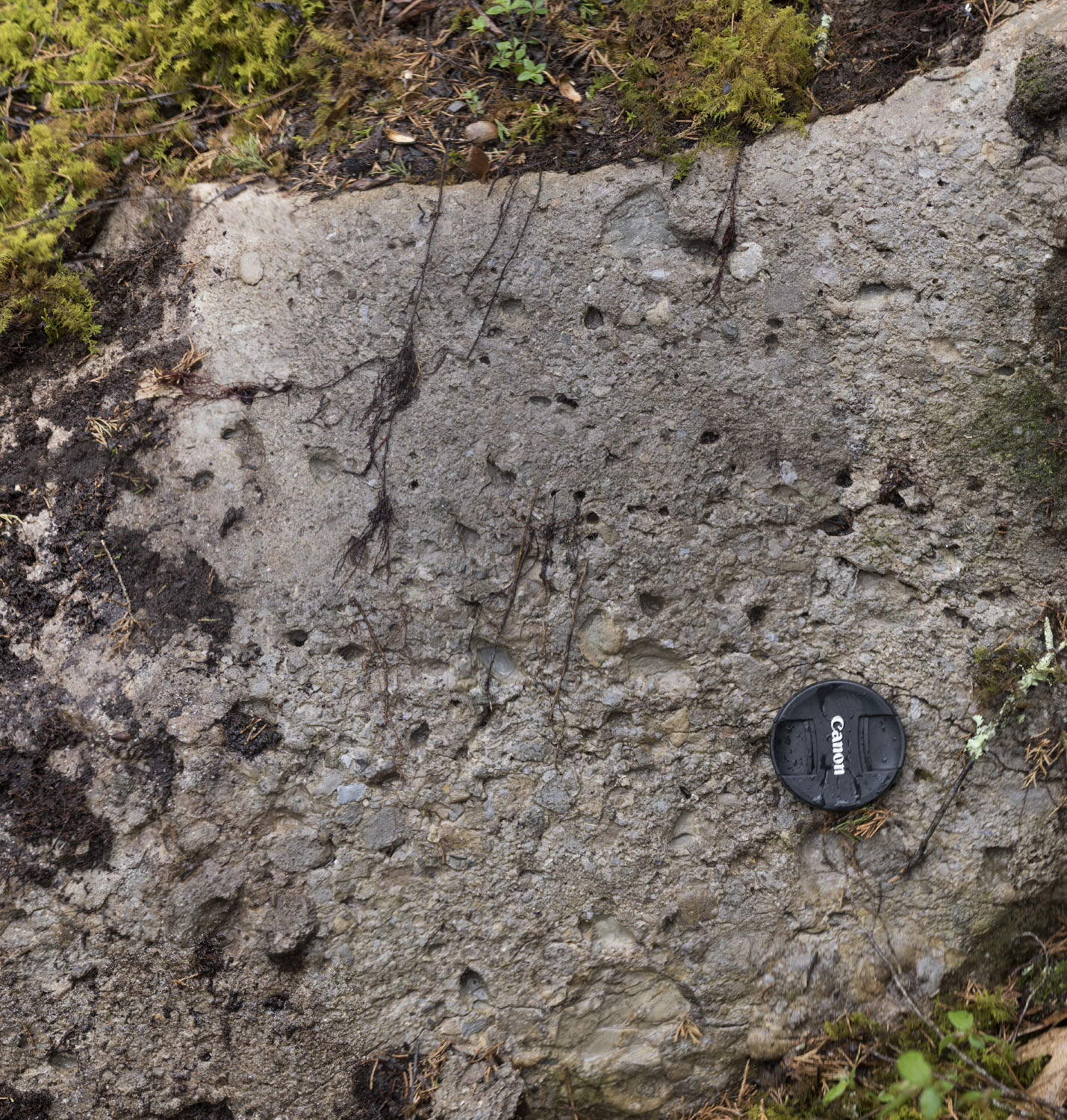 The lower breccias appear to exhibit graded bedding, or a sorting of clasts from large ones at bottom to smaller ones at top. These breccias may have been sorted by the surge of water back into the crater following the impact.

Climbing further, we started noticing an odd drainage pattern. Normally, channels converge as they flow downhill. Here, they seemed to split. The splitting seemed to follow a triangular pattern, and one suggestion floated was that these might be an large, highly eroded shatter cones. The process of shatter cone formation is not well understood, but they are associated with impact craters. These form in fine-grained rocks like (such as limestones and shales) and have a conical shape that points in the direction that the pressure was coming from. Small shatter cones are abundant at Flynn Creek, but larger ones remain unconfirmed. Here's an annotated image showing some of the conical features: 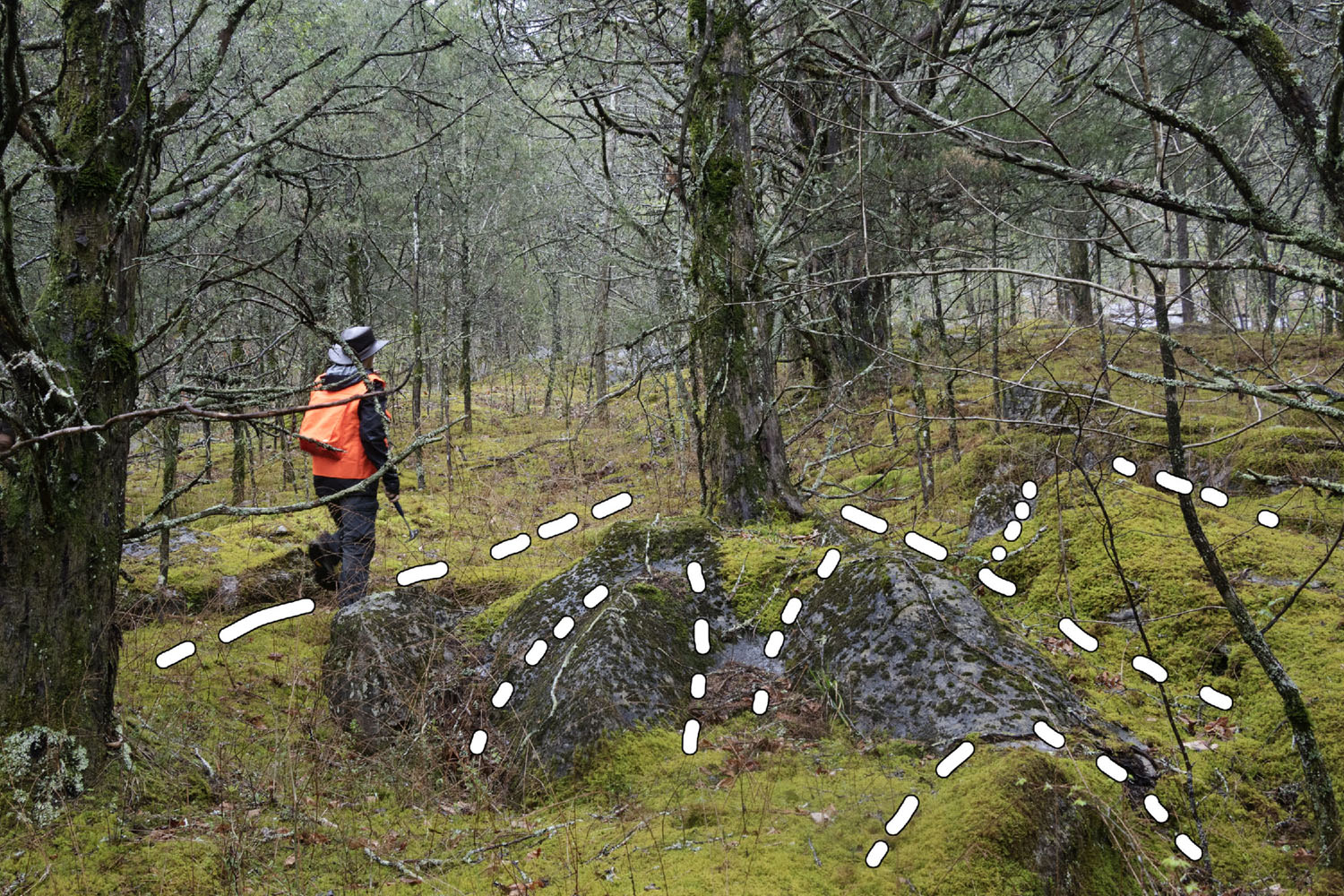 Finally, we reached the exposure of the upper breccia. This breccia contains much smaller, and generally fewer pieces than in the lower breccia. The composition of the melt is generally very fine-grained quartz. This is very odd to see in a melt that was thought to have been derived from a carbonate! However, trace elements suggest that the source of this melt was a sandstone cemented by calcite or dolomite. Temperatures hot enough to melt quartz are generally enough to thermally decompose calcite/dolomite, releasing the carbonate into the atmosphere as carbon dioxide.

The exposures of the upper breccia are pretty neat as well: 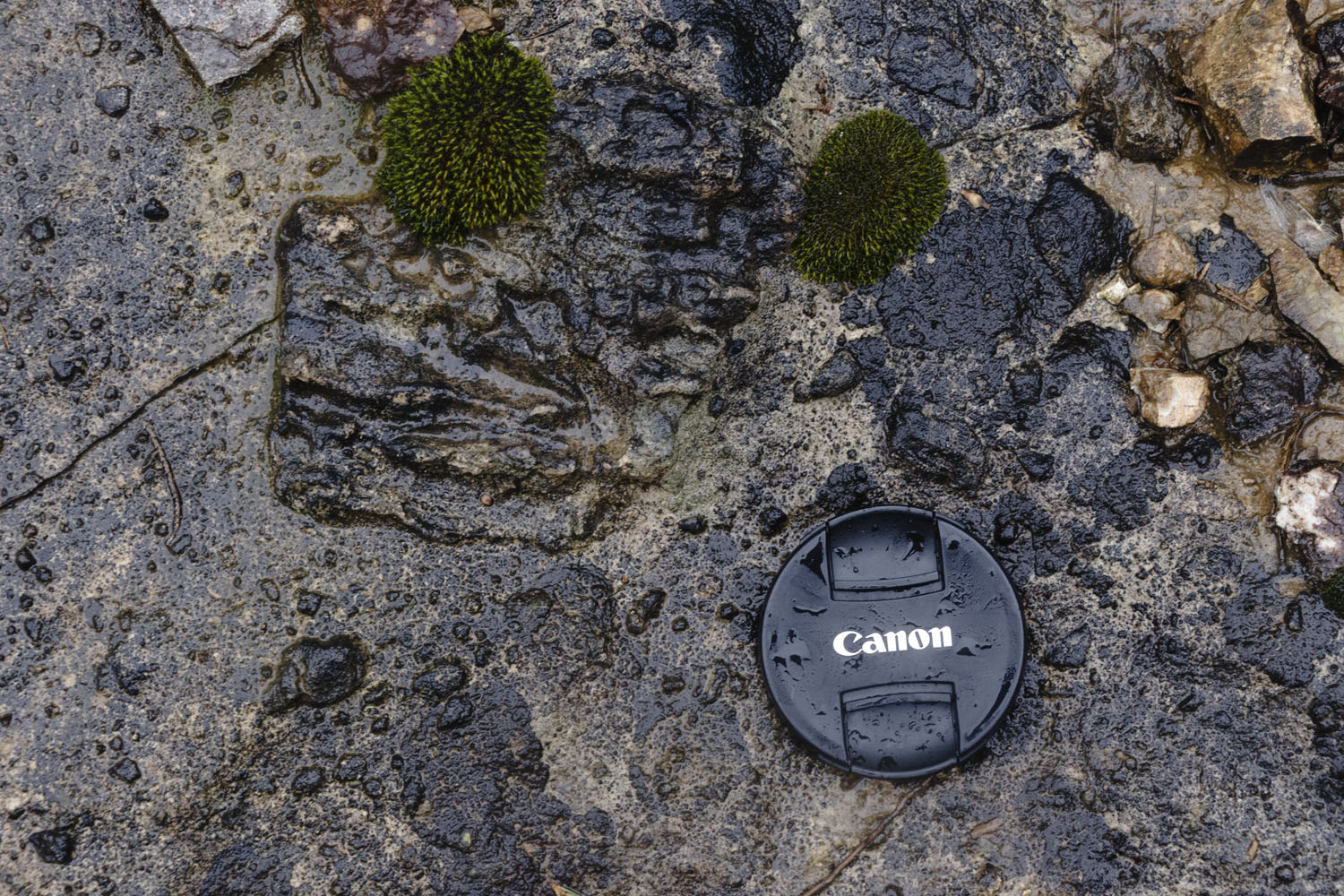 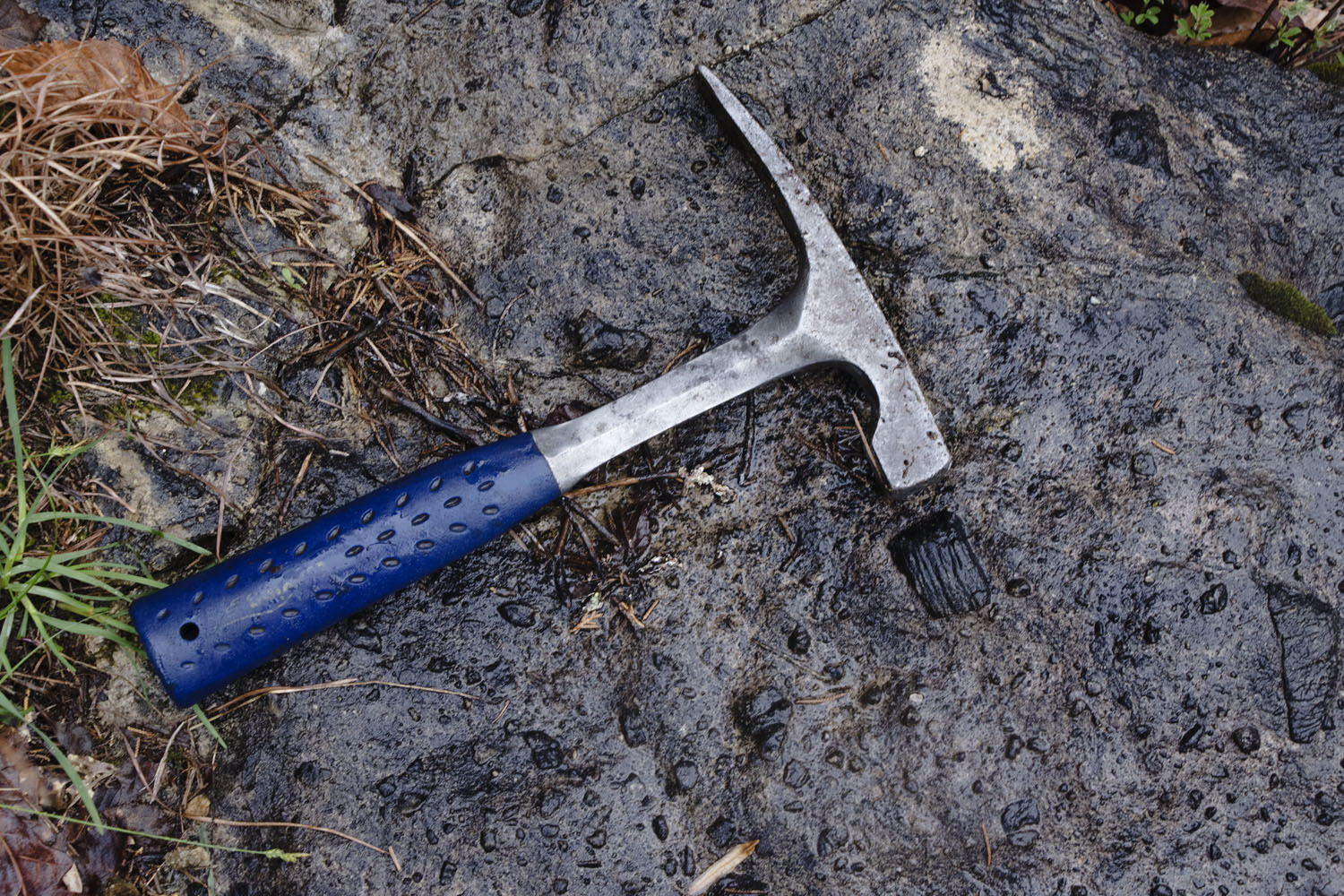 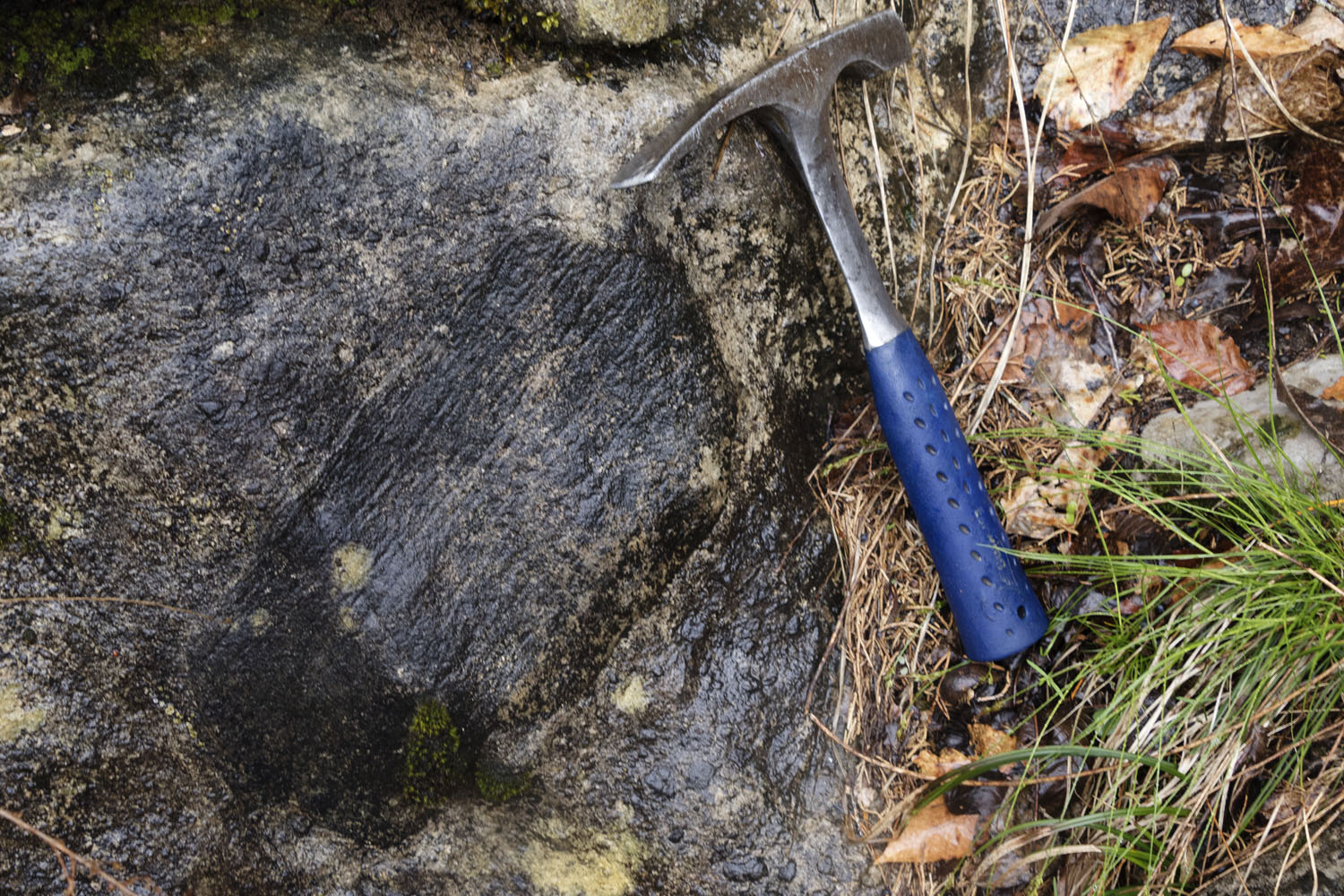 It was about this time that the increasing chill in the air claimed my camera battery. We continued slowly making our way up to the top of the central peak. After crawling around on the very slick outcrops for about an hour and a half, we returned to the cars.

Our final stop was at the road marker along Flynn Creek commemorating the crater as a historical site. Right across the creek from the road are steeply dipping exposures of the limestones and shales belonging to the Middle Ordovician Stones River Group, which mark the western edge of the central uplift. Wish I had pictures. Anyway, with the rain continuing to fall, we called it a day and returned to our hotels in Knoxville.

"The Flynn Creek Meteorite Impact Site and Changing Views on Impact Cratering" provides an extraordinarily detailed history of the scientific history on the Flynn Creek structure, and goes into detail about many of the geologic features that drove that thinking.