This page explores the geology exposed along the summit of Knob Lick, a high hill just south of Farmington, MO. This location contains some lava flows and ash fall deposits that characterize the uppermost remaining portions of the St. Francois Terrane. It also provides a glimpse of how events a billion and a half years ago influence modern ecology.

Knob Lick is one of the higher hills in the Farmington area. The name refers to the salt deposits that developed around salt springs at the base of the hill. These deposits are often referred to as "licks", as wildlife gather at these spots to lick up the salt and other vital nutrients associated with the deposits. The knob’s topographic prominence gives it a commanding view of the surrounding area, which led to the Missouri Department of Conservation constructing of a fire lookout tower on its summit. This tower has been abandoned due to shifts in technology technology and fire management practices. Infrared imagery from satellites like Landsat and Sentinel can detect brush fires relatively quickly, without the cost of staffing a ranger to watch for fires full-time. Smaller brush fires are also allowed to burn themselves out as land managers came to the realization that fire suppression in the short term can lead to larger, more destructive fires in the long term. 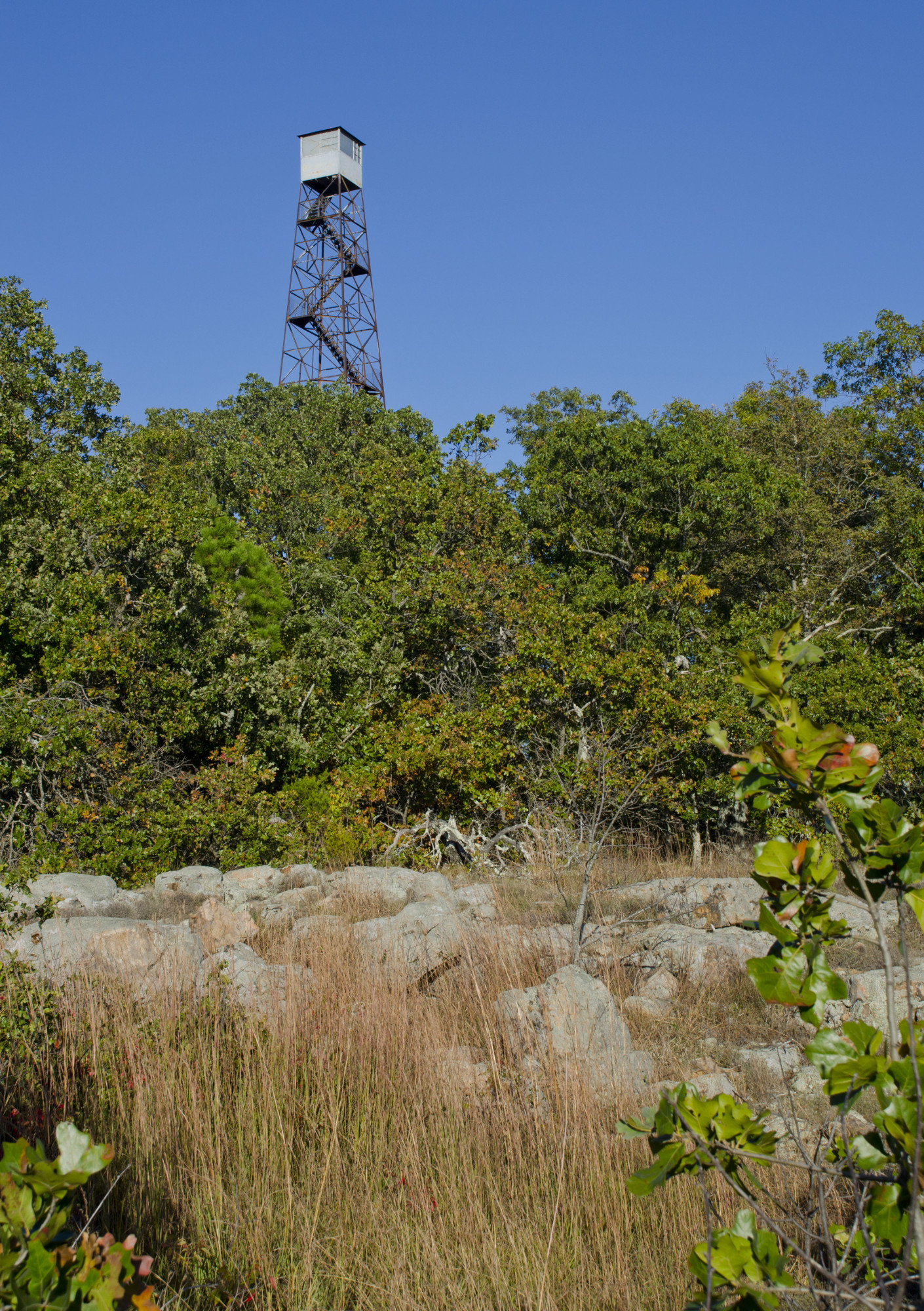 Near the summit of the knob is a large glade containing a jumble of boulders and assorted loose rock. These rocks are a "rhyolitic ignimbrite". A rhyolite contains quartz (a clear to dark translucent mineral), potassium feldspar (a pinkish blocky crystal), and plagioclase (a white to gray blocky mineral) in roughly equal abundance. If the melt that formed these rocks had been given time to cool, it would have formed the large, attractive crystals of the kind seen in a nice countertop. However, this melt was erupted violently, cooling it very quickly or even quenching it. These resulting rocks have very few visible crystals. “Ignimbrite” is a fancy term for a pyroclastic deposit that’s hardened into solid rock. In the geologic record, ignimbrites usually record a fairly substantial eruption. In small eruptions, most of the ash is quickly washed away before it is buried. But in larger eruptions, the heat trapped within the deposit actually begins to fuse the ash together, helping protect it against erosion. The ignimbrite we see at Knob Lick is no exception - it several cataclysmic eruptions. Named the Grassy Mountain Ignimbrite for its good exposures at nearby Grassy Mountain, this rock unit crops out over at least 32 sq km (12 square miles) and averages an astonishing 1 km (3200 feet) thick. That means that nearly 32 cubic kilometers (7.7 cubic miles) of ash can be accounted for, and with ashfall deposits that total up to 1.6 km (5200 feet) thick, there’s certainly much more that’s been lost to time. 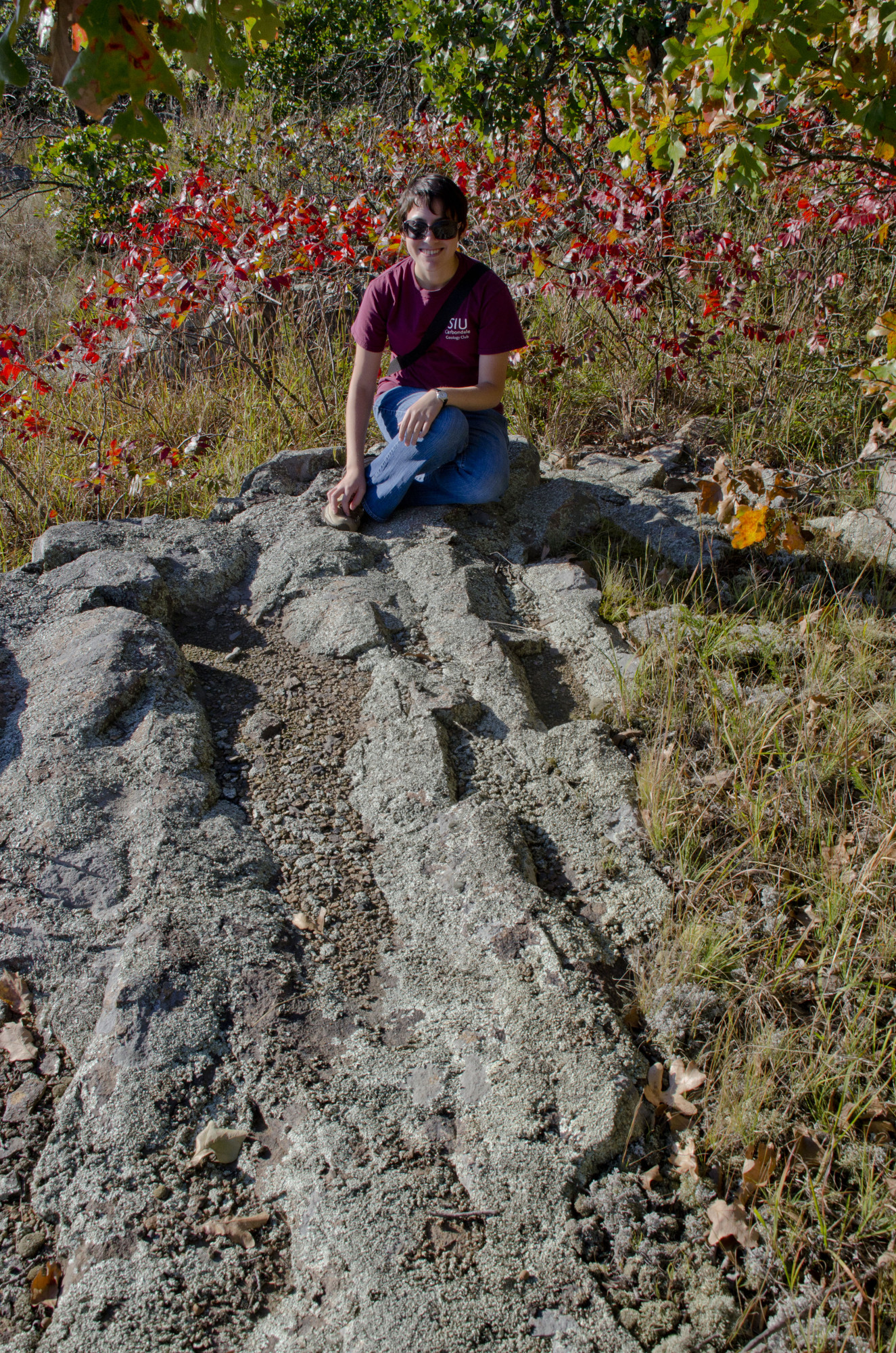 You may be familiar with columnar jointing in basalt – they’re the spectacular hexagonal columns that you see at Devil’s Tower in Wyoming, Devil’s Postpile in California, and Giant’s Causeway in Ireland. Columnar joints occur when a very hot rock cools slowly. The rock thermally contracts as it cools, causing it to crack. If the cooling rate is slow enough, these fractures propagate in a regular pattern to form columns. Their formation is relatively common in basalts, because these flows are both very hot and can be very thick. They are much rarer in rhyolites because the eruption temperature tends to be much lower. The colder rocks tend to shatter at random as they cool, preventing the formation of nice columns. However, this can be overcome by an extremely slow cooling rate, which was probably the case within the extremely thick ashfalls of the Grassy Mountain Ignimbrite. The conditions allowing the formation of rhyolite columns are extremely rare, so they are only found in a few places in the world. However, another example of rhyolite columns (and an indisputable one at that) is only a few kilometers away as the crow flies at Devil's Honeycomb in the Hughes Mountain Recreation Area, so it's not a big stretch to expect scattered examples within the ignimbrites of the St. Francois Terrane.

A careful look around the summit reveals another interesting rock...sandstone! 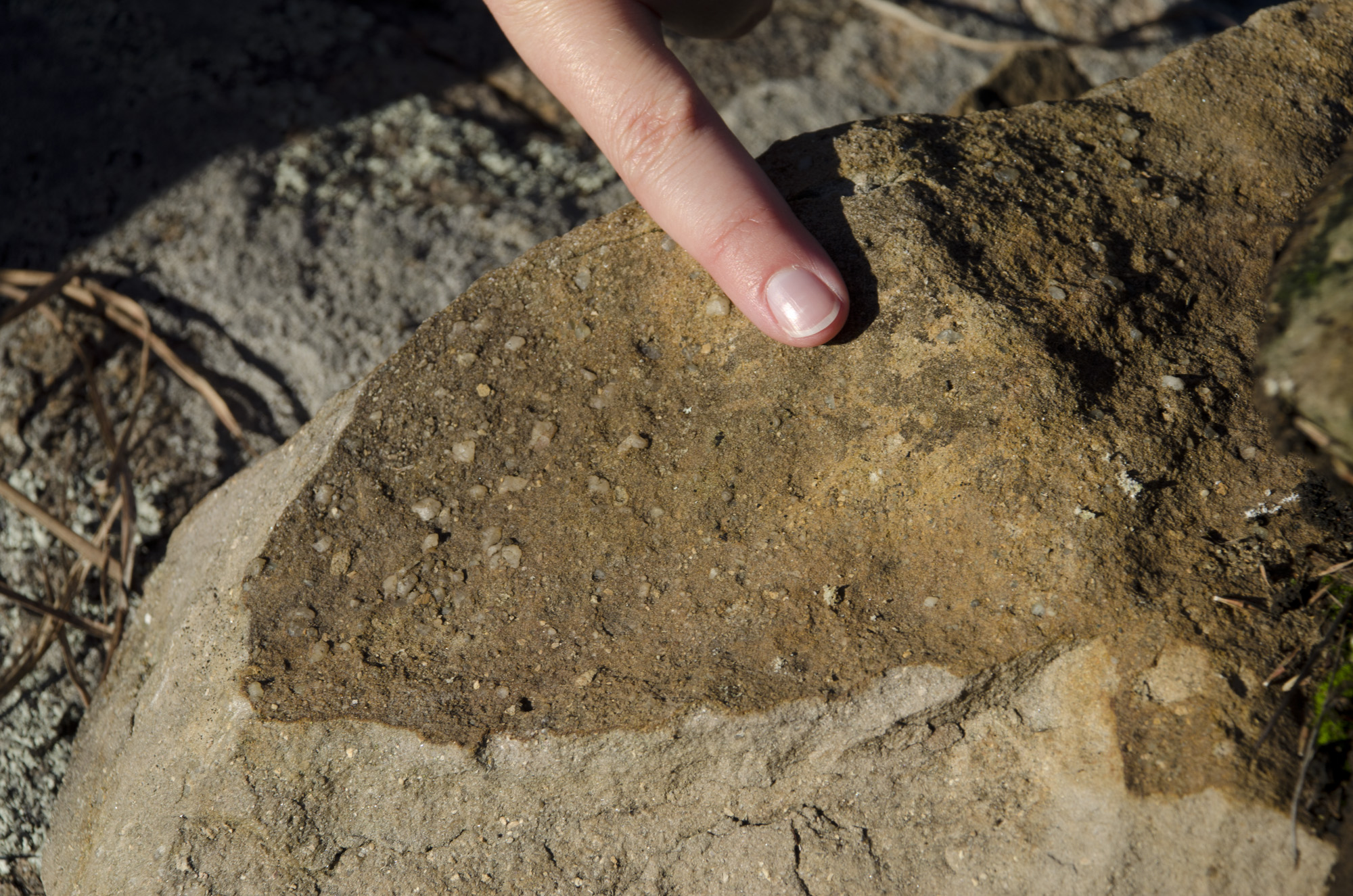 The presence of a sedimentary rock here is unusual. We can rule out that it's from one of the Paleozoic sedimentary rocks draped along the edges of the St. Francois Mountains - they eroded off of Knob Lick millions of years ago. In addition, the sand and gravel clasts in the Paleozoic rocks are relatively rounded, indicating their sharp edges were worn down by rolling around in beach currents. This tells us that the sandstone here is probably associated with the Grassy Mountain Ignimbrite.

This sandstone comes from a small lens-shaped exposure. From this small rock, we can glean several different things about the environment 1.4 billion years ago. The clasts are pretty angular. In particular, the gravelly bits are feldspar crystals, which have internal planes where the bonds holding the crystal lattice together are particularly weak. These form planes of weakness, called clevage planes, where the grain tends chips very easily. Feldspar crystals break very quickly when they're being jostled along the bottom of a river bed or along a beachfront. This tells us the sediment isn't too far from where it originated. The clasts are unsorted, which implies the sand was being carried by a quickly-moving stream that was suddenly losing energy. However, we don't see very small clasts, so it's likely that the water did not stop moving completely. Finally, because it is embedded within the Grassy Mountain Ignimbrite, we can say with certainty that the ignimbrite was formed by at least two separate eruptions.

Given the location, a reasonable speculation might be that this sandstone was deposited in a small stream channel that formed on the surface of an ashfall (picture this example from the Valley of Ten Thousand Smokes in Alaska). A rapidly running creek might have run through of this channel. It might have picked up sand and gravel as it accelerated through a small rapid, and dumped the extra material as it exited the rapid and slowed. This image is only a fragmentary one; we can't tell where the stream may have been going, how long it lasted, or whether it existed at all. But this sandstone does tell us that there were more than just eruptions happening here 1.4 billion years ago.

The large pyroclastic deposits of the Grassy Mountain Ignimbrite require a source, and geologists have a strong suspect. Field mappers have traced out a series of arc-shaped faults. These semi-circular faults typically form during cataclysmic eruptions as a magma chamber empties and the overlying rock drops like a piston to form a caldera. These faults define the Butler Hill Caldera, which is the likely source of the Grassy Mountain Ignimbrite. These faults have probably not been active in recent geologic times, but they have defined an arc of broken hills marking the rim of the ancient caldera. We can get a sense of the caldera's scale simply by looking southward from the summit. 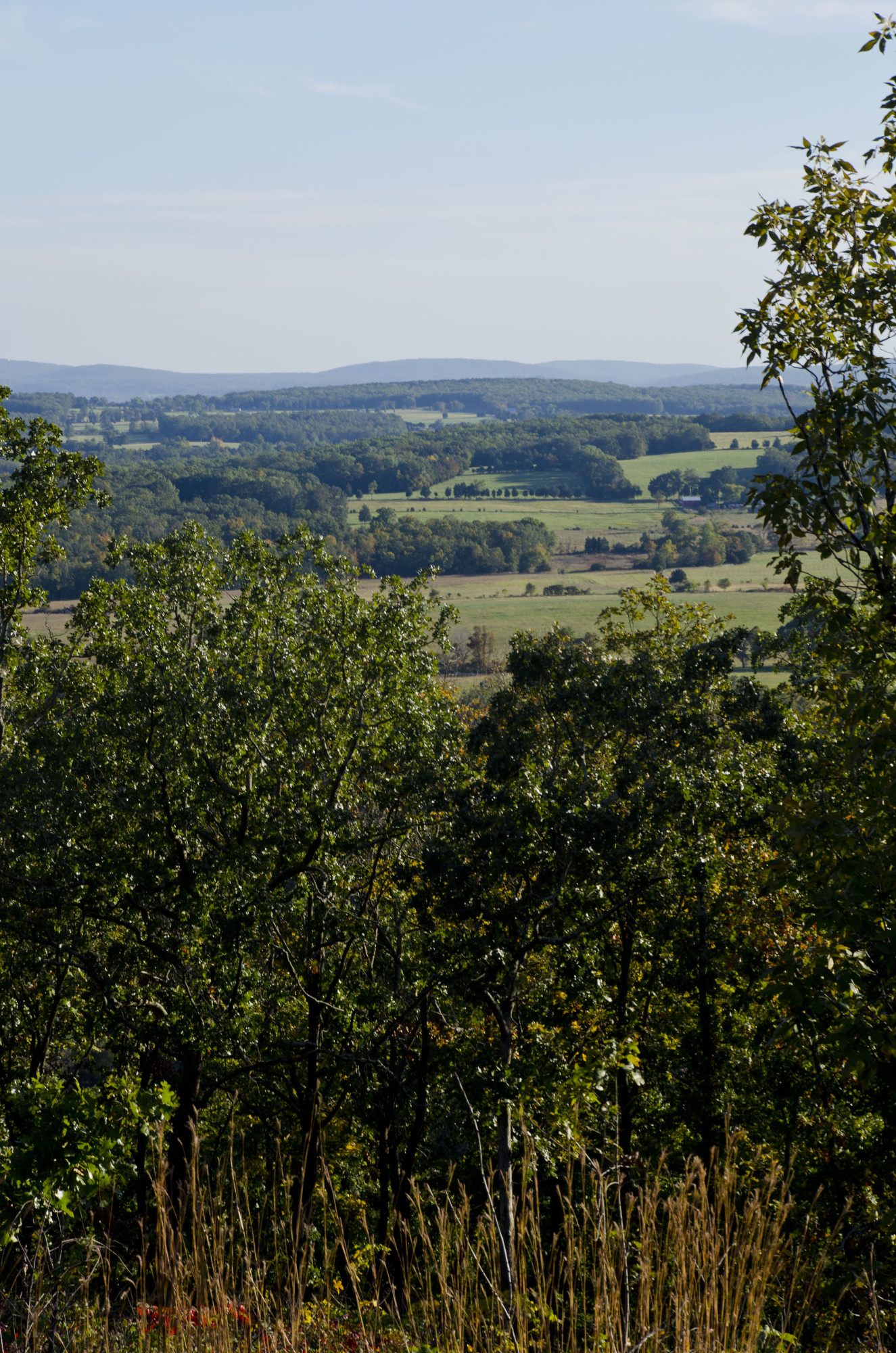 The low hills in the foreground cover the floor of the Butler Hill Caldera. The higher hills in the background are the "rim", as they roughly follow the surface trace of the arc-shaped faults marking the caldera's edge. In fact, if you look at the area in Google Maps, you can see the valley matches pretty well with the mapped faults - approximately marked with the red dashed lines. 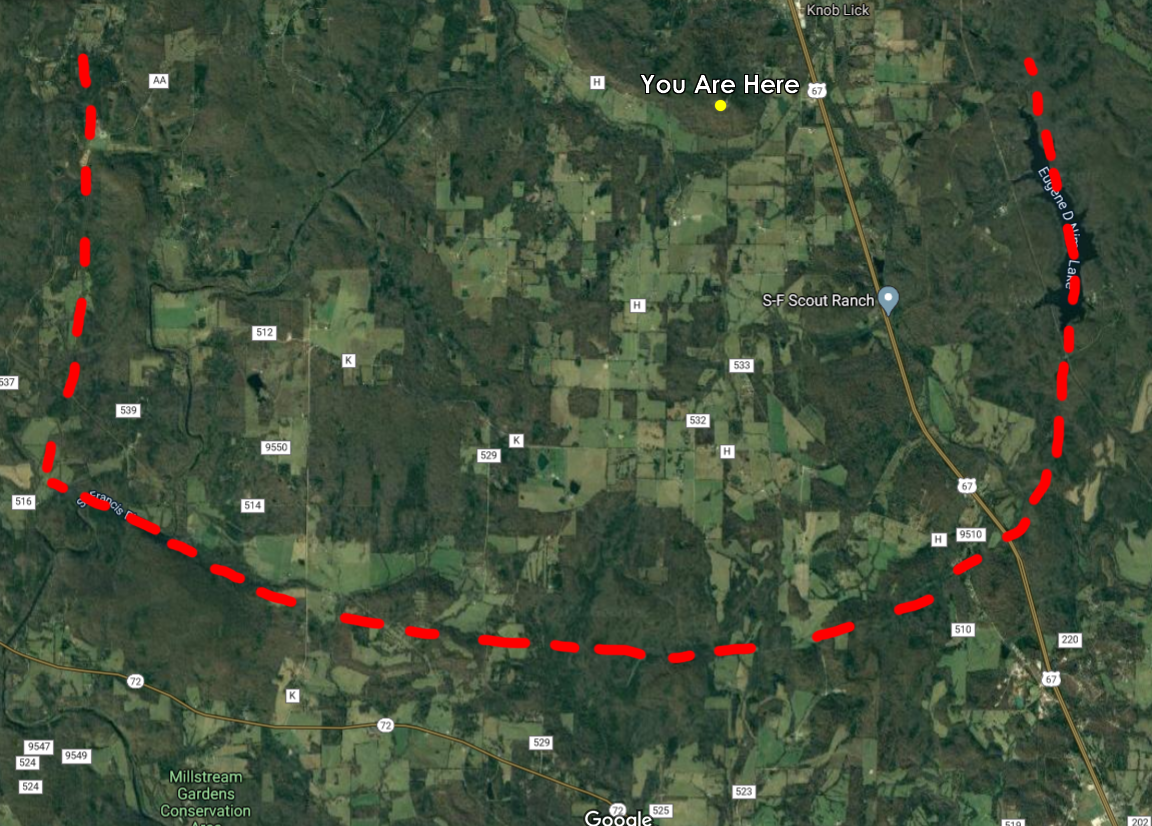 Grassy Mountain Ignimbrite overlies a mass of granite known as the Knob Lick Granite. Most of Knob Lick is composed of this granite, with the ignimbrite forming only a thin veneer over the top. The Knob Lick Granite actually postdates the formation of the Grassy Mountain Ignimbrite by a few million years, and the melt that formed it appears to have intruded along the base of the ignimbrite. The emplacement of a granite brings with it some chemical changes to the surrounding rock. The heat can alter the existing rocks and even bake them to a ceramic-like hardness. In addition, the magma expels gasses and fluids, which can mineralize along fractures within the surrounding rock. We can see an example of this in the scattered bright veins in the Grassy Mountain Ignimbrite. 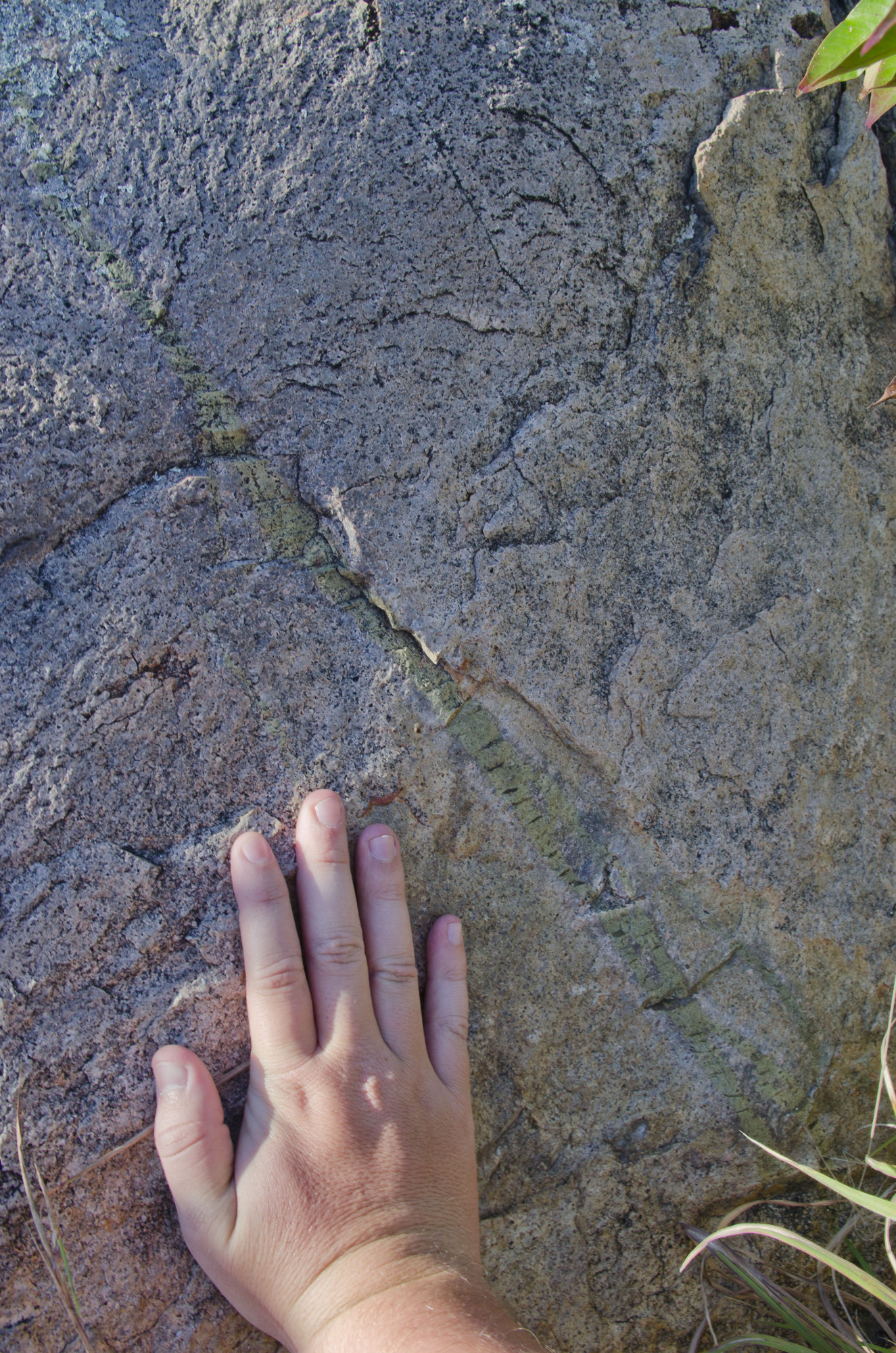 The fluids that precipitated the epidote were out of chemical equilibrium with the rocks they were soaking into. This lead to the formation of an alteration halo (the whitish zone flanking the green streak in the photo above) where the intrusion did some atomic horse-trading with the surrounding rock. Eventually the fluid began to crystalize, forming the bright green mineral epidote, which is mostly composed of calcium, iron, aluminum, and silicon. Epidote is what some ore geologists refer to a "trash can" mineral - because it is one of the last minerals to crystalize, many trace elements that don't fit into other minerals end up in the epidote.

Now that we have a good overview of the geology of Knob Lick, let's move on to its effect on ecology. Knob Lick is home to a "rhyolite glade" ecology that is rare within the St. Francois Mountains and nonexistent outside of them. The fauna here almost resembles a desert or savanna - spindly drought-resistant grasses, stunted scrub oaks, and the occasional prickly pear cactus. The reason for this desert-like flora is the Grassy Mountain Ignimbrite. Rhyolite is incredibly resistant to erosion. Quartz is almost impervious to chemical activity, and the feldspars can take a beating before they throw in the towel. The almost porcelain-like quality of the rock adds to its ability to resist weathering. In a coarser-grained rock like granite, large crystals can develop pits and cracks, which give naturally acidic rainwater a greater surface area to attack. Freeze-thaw cycles can also cause large crystals to crack as they heat and cool at different rates from the surrounding rock. In rhyolite, neither avenue of attack are very effective.

On the top of a high hill like Knob Lick, the only source of new soil is by the breakdown of rocks. The slow breakdown of rhyolite means that it doesn't produce sediment for soil very quickly, and those sediments can wash downhill nearly as quickly as they form. As a result, plants can colonize the few nooks and crannies where sediment is able to pile up. Once established, these plants face a harsh environment. Water is always in short supply, and south facing slopes frequently see near-surface temperatures higher than 40 degrees C. For all intents and purposes, life in the glade is functionally a desert. 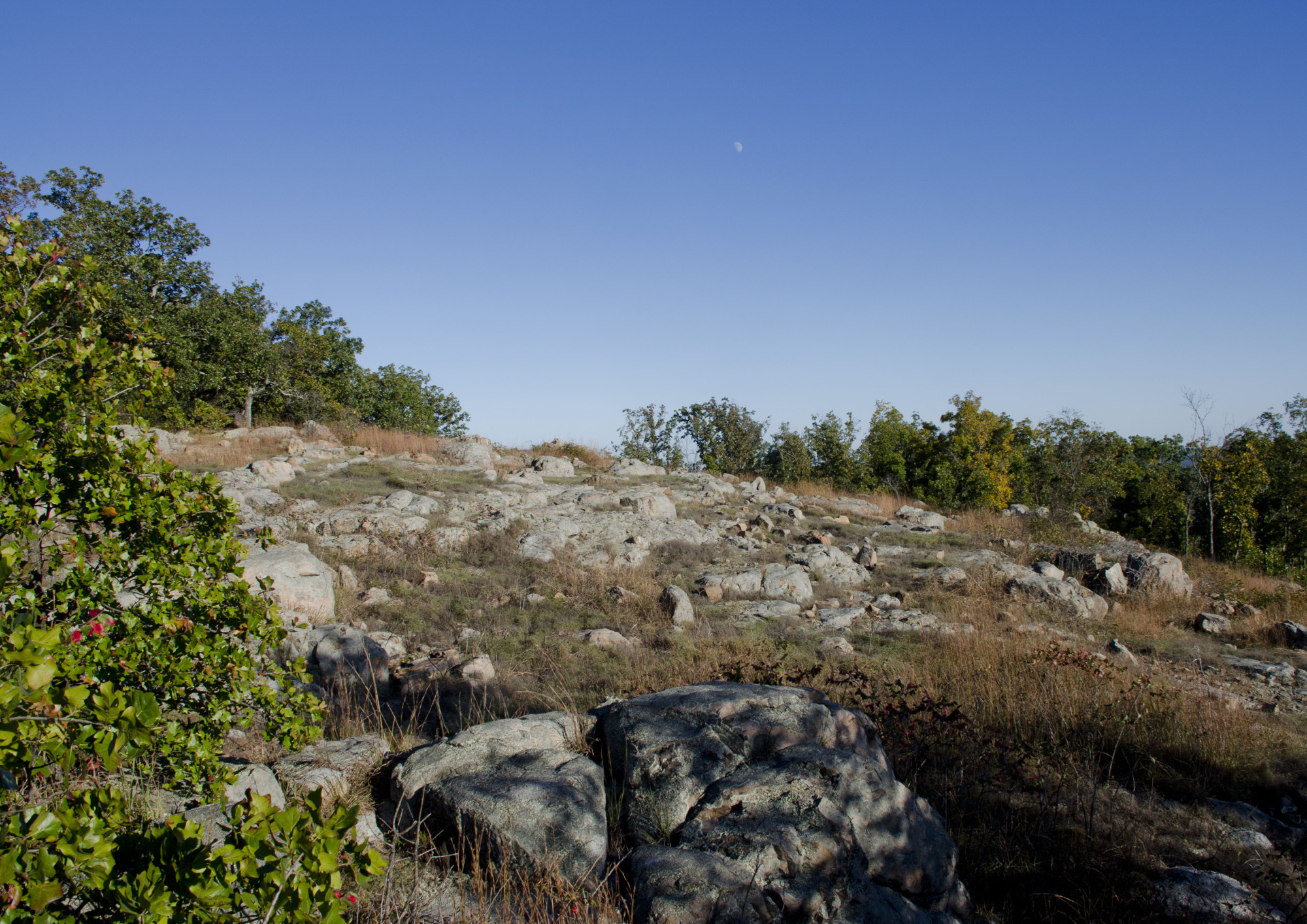 For me, it's interesting look across this glade and think about the relationship between geology and ecology. The surface here was set in stone 1.4 billion years ago, long before complex life existed on the planet. Yet today, despite evolution slowly adapting life to harsh conditions, this hillside contains an obstacle that is difficult for life to conquer. This glade contains a small microcosm of the wider planet, a world where events interact in many unforeseen ways across long stretches of time. Because a volcano erupted here more than a billion years ago, life struggles to eke out a living today.