Banded iron deposits form some of the most spectacular geological outcrops you'll ever see. These deposits are composed of thin, alternating beds of specular hematite (a bright silvery mineral), white chert, and bright red jasper (chert + hematite). The great age of these deposits (most are more than 1.8 billion years old) means that these thin layers have been squeezed and folded by plate tectonics to form vividly folded rocks.

The banded iron deposits at Soudan, MN are no exception. Visiting the outcrop behind the main mine and taking a tour of the mine have been a dream of mine for many years. In the summer of 2018, I got my chance! Have a look: 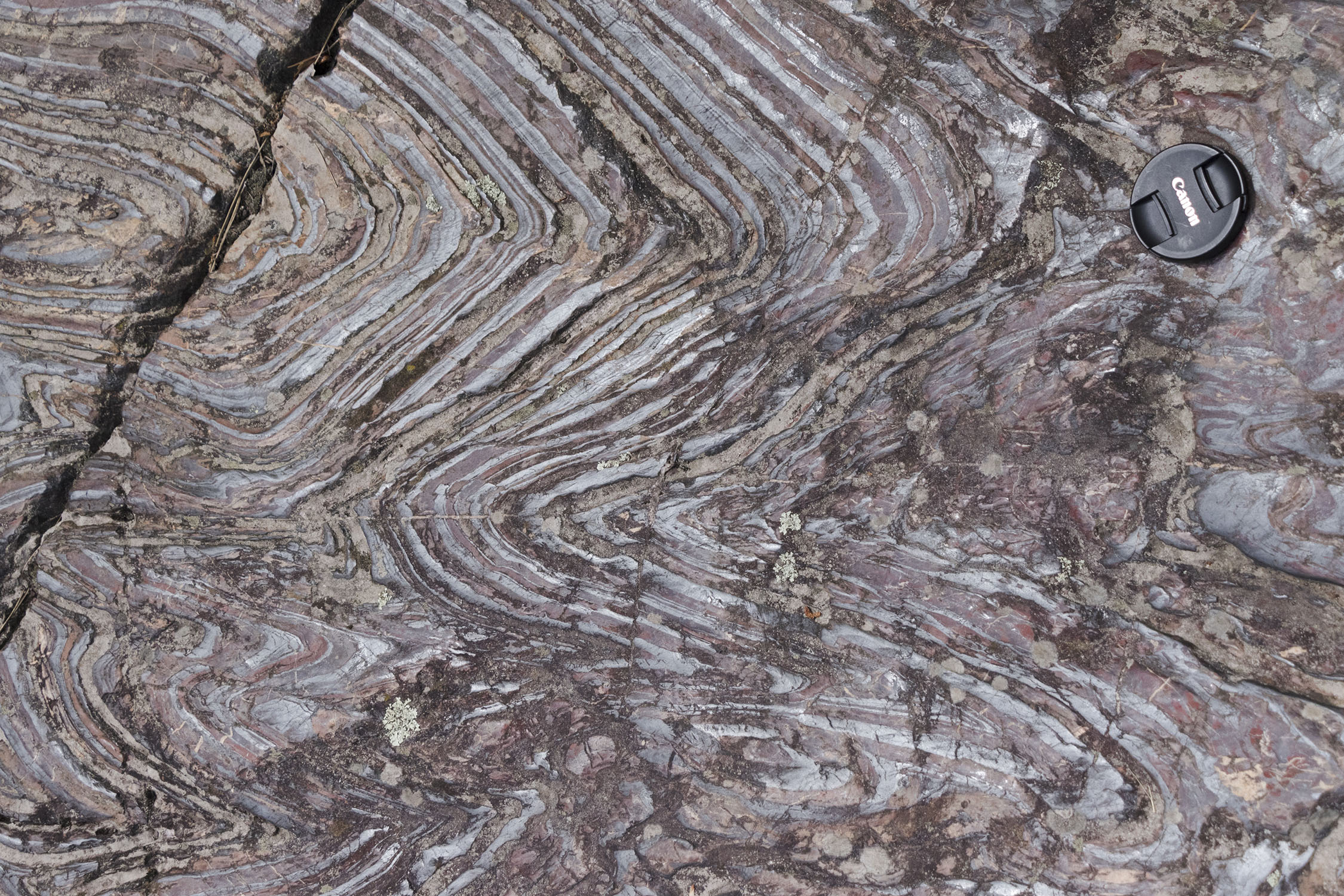 Before oxygen became widespread in Earth's atmosphere ~1.8 billion years ago, the oceans were rich in iron. Iron in its reduced 2+ form (ferrous iron) readily dissolves into water, while in its oxidized 3+ form (ferric iron) it is nearly insoluable. Banded iron deposits formed where local conditions oxidized the water, causing the iron to precipitate out as hematite and settle on the sea floor. Over time, the iron would become locally depleted, allowing silica to precipitate out of the water as chert. This was followed by the slow return of dissolved iron to the water, which first stained the chert bright red, then increased to the point that only hematite was deposited.

Banded iron deposits formed after about 2.4 billion years ago are primarily associated with the appearance of photosynthetic bacteria, which dumped oxygen into the water as a byproduct of assembling sunlight, carbon dioxide, and water into sugars to power their metabolisms. However, the Soudan Banded Iron Formation predates their widespread appearance. They appear to be more like banded iron formations that formed earlier in Earth's history, which are exclusively associated with basalt lavas. The exact mechanism of forming banded iron formations from volcanic rocks is not particularly well understood, but they are thought to be the product of hydrothermal interactions between iron-rich seawater and volcanic hydrothermal systems.

Shortly after their formation, the rocks of the Ely Greenstone were involved in several phases of mountain building as several similar island chains collided with one another. These collisions fold the rock, often in spectacular ways, but a more subtle influence played a role in the economic development of the region. Hot water circulating within the Soudan Banded Iron Formation totally dissolved the chert and jasper, leaving behind large, relatively pure pods of hematite. (These fluids also altered the surrounding basalts to an assemblage of minerals (chlorite, epidote, actinolite, and tremolite) that have a mostly green color - the reason these rocks are referred to as "greenstone".) The collision also folded these pods together to form larger ore bodies that miners chased into the Earth.

The result was rich veins (up to 69% iron by weight) in the area around Soudan that formerly powered the economic engines of northeastern Minnesota. One of the outcrops that drew prospectors to the area is located on the hill behind the main mine. This "pavement" outcrop (so-called because it forms a flat exposure that you can walk on) is full of amazing details. You could probably spend hours crawling over it and still see something new.

There are boudins (French for "sausage"), which is where the hard hematite layers have squeezed the softer japser into segments that look like a chain of sausage links: 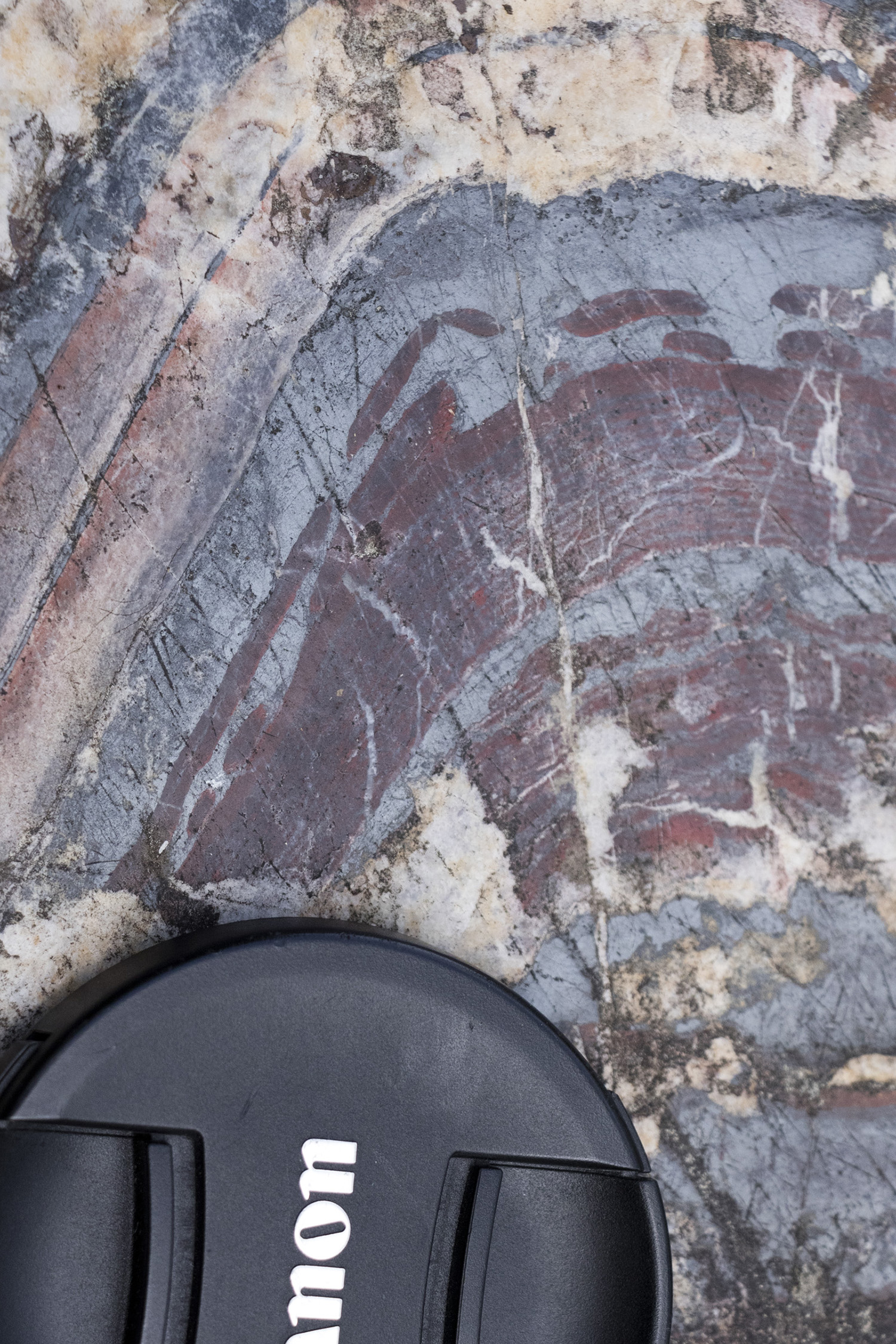 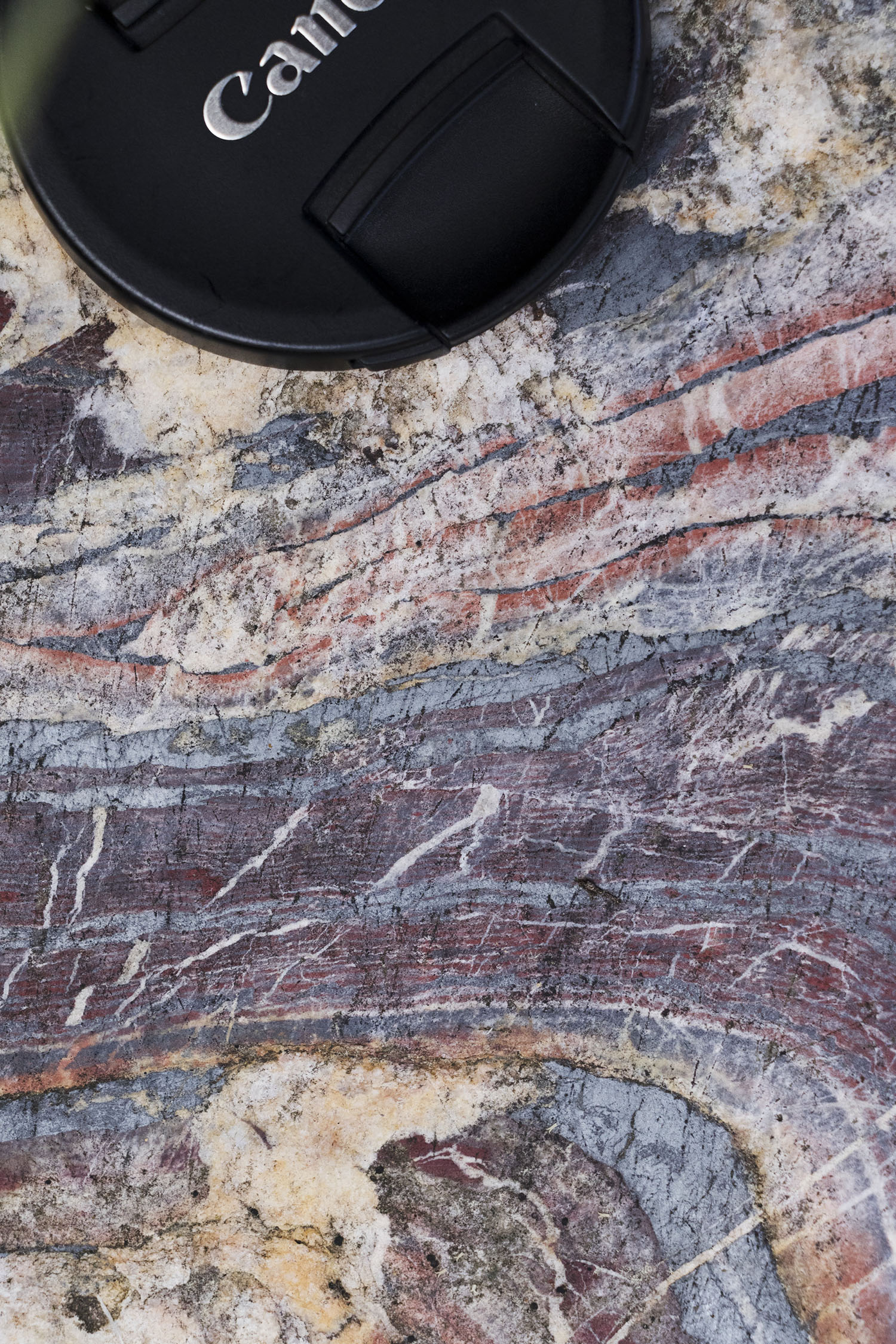 There are microfaults that formed during the late stages of deformation: 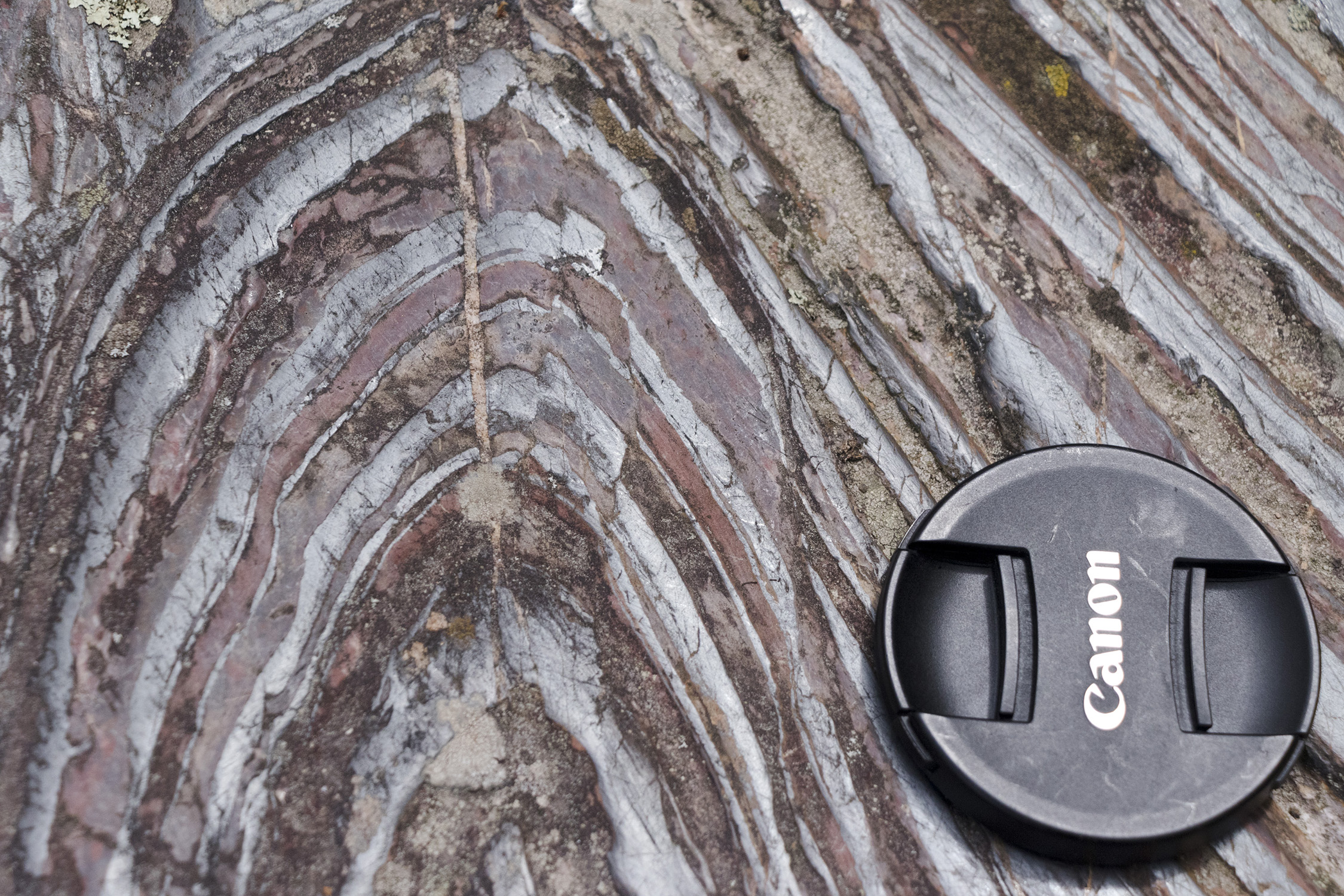 Some of the fault orientations make you think three-dimensionally about the fold orientations! (A note: this went unnoticed by me at the time, so I didn't make a dedicated photo of it, but if you look carefully at the top right, you can see that one of the jasper layers is kind of streaky. These are apparently a small layer of pebble clasts that were deposited and then squeezed flat by deformation. They tell us the Soudan Banded Iron formation was deposited close to shore.) 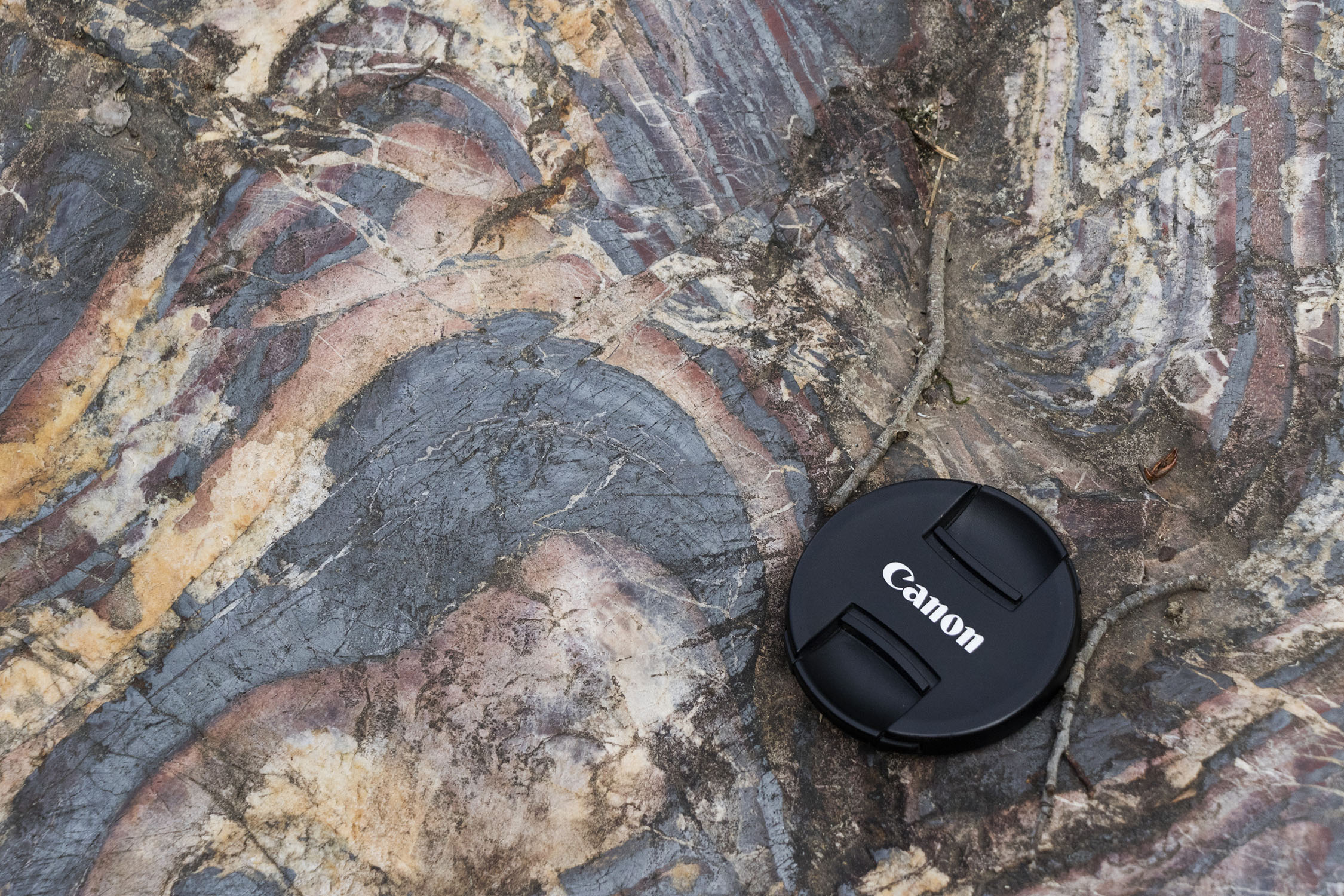 Miners began working an open pit in 1882 along a particularly rich pod of pure hematite roughly 100 meters long and 20 meters wide. By 1901, working under the steep and unstable walls of the pit became a regular safety hazard, and more expensive underground mining was adopted. (Images from the Minnesota Historical Society and Roy Luck, respectively) 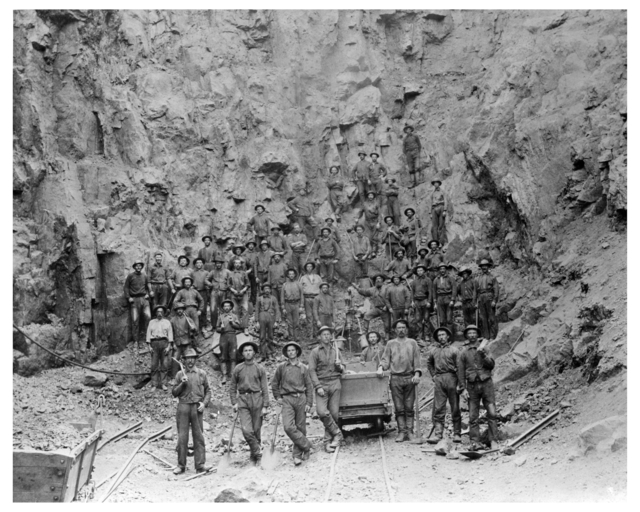 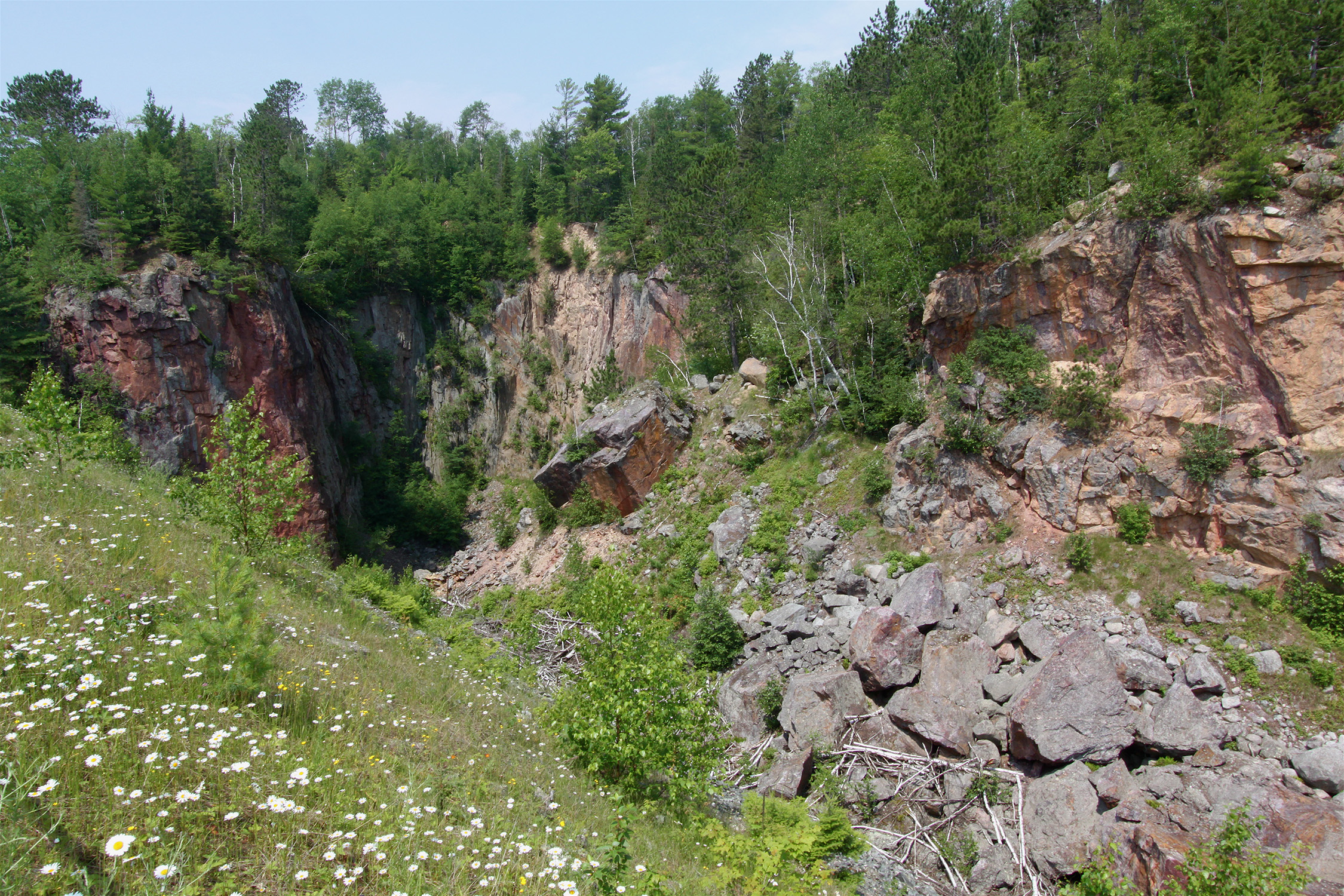 By the time the mine closed in 1962, it had developed into one of the deepest and most extensive mines in the United States, reaching a depth of 713 m (2341 feet) below the surface and containing over 80 km (50 mi) of tunnels. Today the Soudan Mine is a Minnesota State Park, and is open for tours. 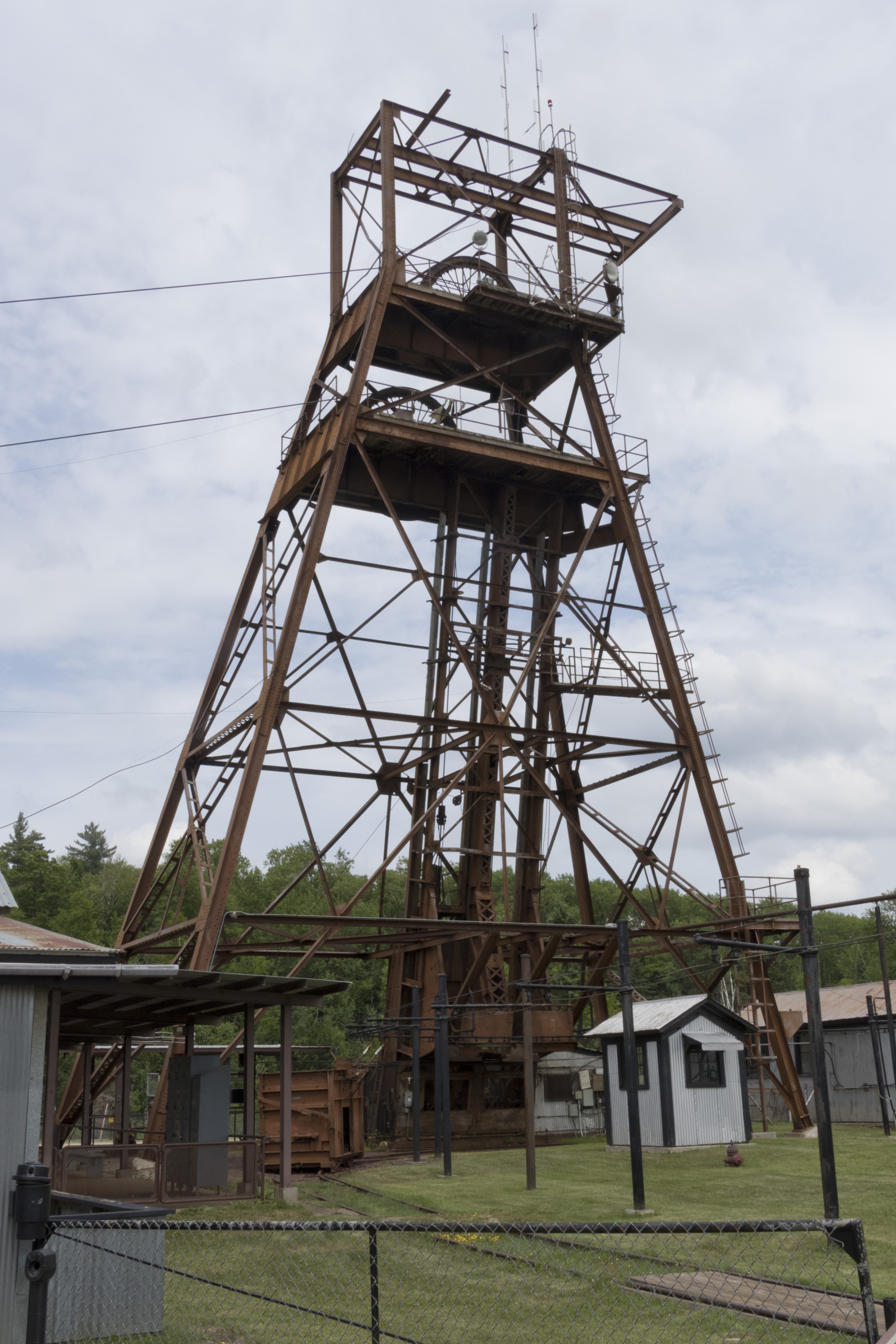 The tour takes you to Level 27, the deepest layer of the mine. The ride down is through the same elevator system used by the miners back in the day - a double-deck car about 6 1/2 feet high and 4 feet deep, with the back wall tilted at about a 7 degree angle (the same slope as the mineshaft). A handful of people load into the bottom level, the car is lowered, and then the top level loads. A door closes and a roughly two minute ride to the bottom starts. 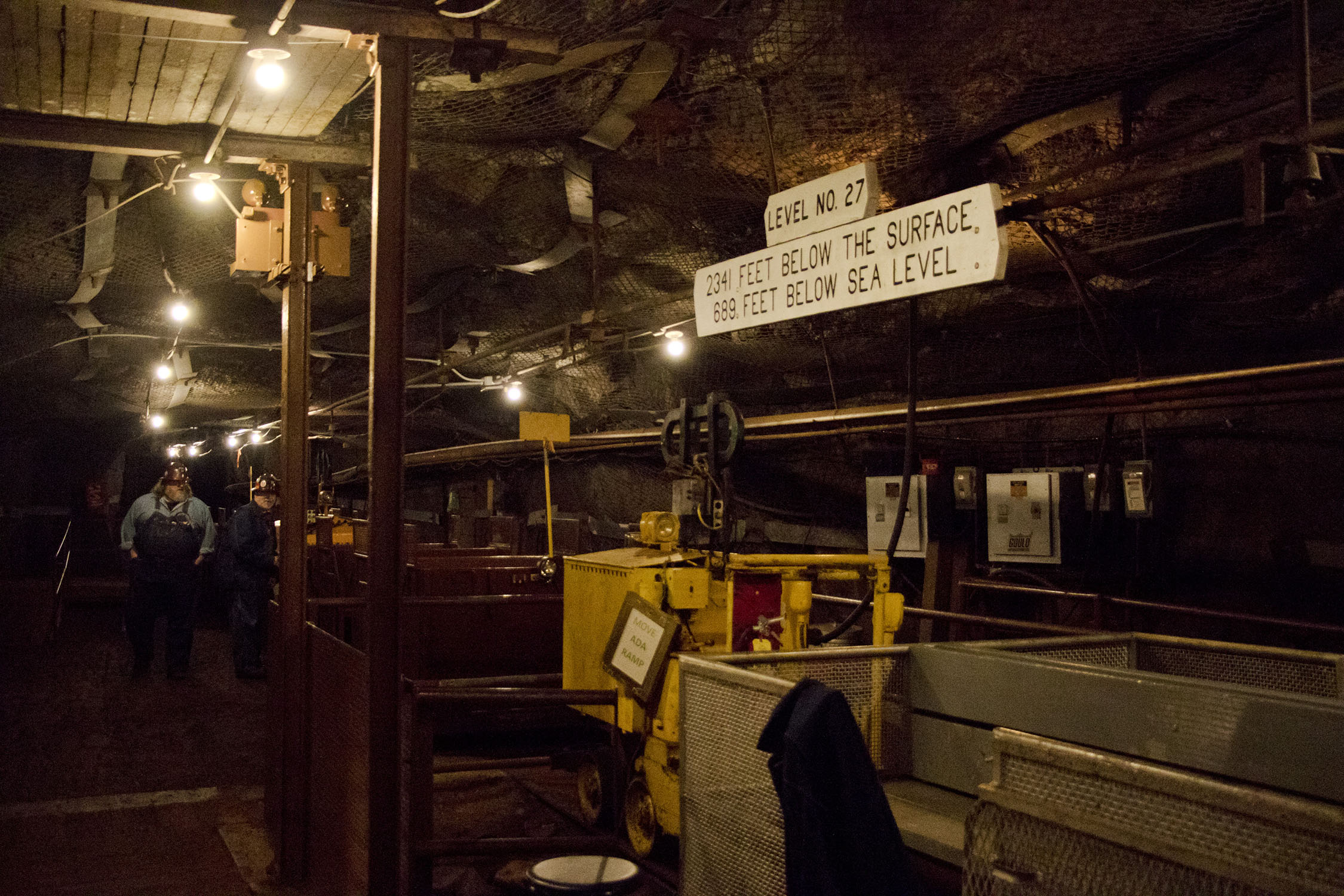 The tour gives an unvarnished look at the work the dangerous, dirty work facing the miners. As we took a train ride to the active part of the mine, our guide Karl reminded us that the miners were not allowed the same privilege, instead having to walk the roughly quarter mile to the tunnel's end in the dark, navigating by keeping one foot pressed against the rail. The reason for this Stygian journey was that each miner was responsible for buying their own light source at the company store. Keeping a candle or acetylene lamp lit during the quarter-mile walk was approximately 10 minute of wasted lighting. 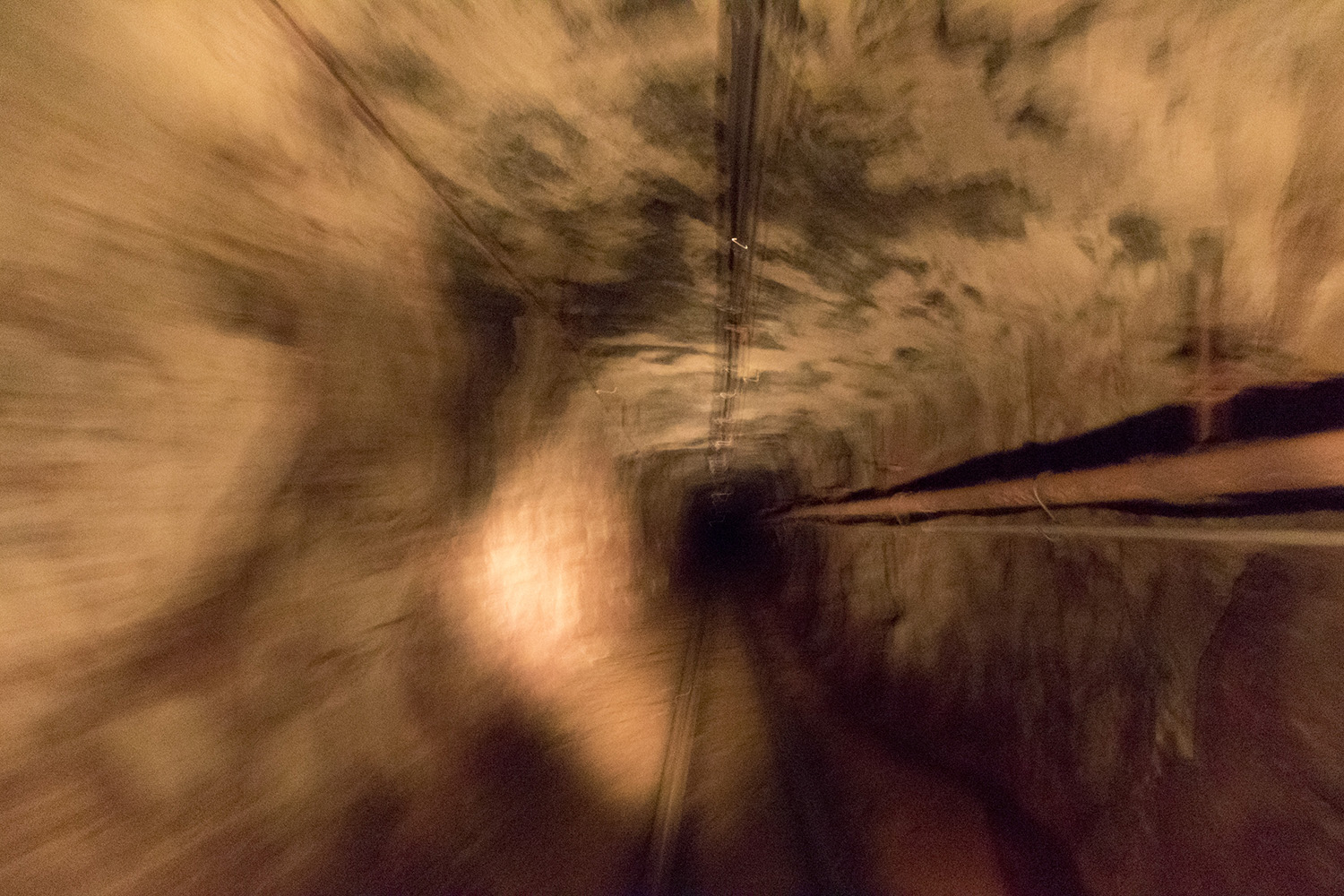 The work was also hazardous to the miners health. The large amount of chert/jasper mixed into the rock, when blasted out by dynamite, greated a large amount of fine, silica dust. Many miners began developing silicosis in their 40s and 50s. Those lucky enough to escape that fate often did not escape with their hearing intact. The mine still has an operational drill that bored holes for dynamite placement, which they activate for a few brief seconds during each tour. It is bone-shakingly loud, even from a dozen yards away. 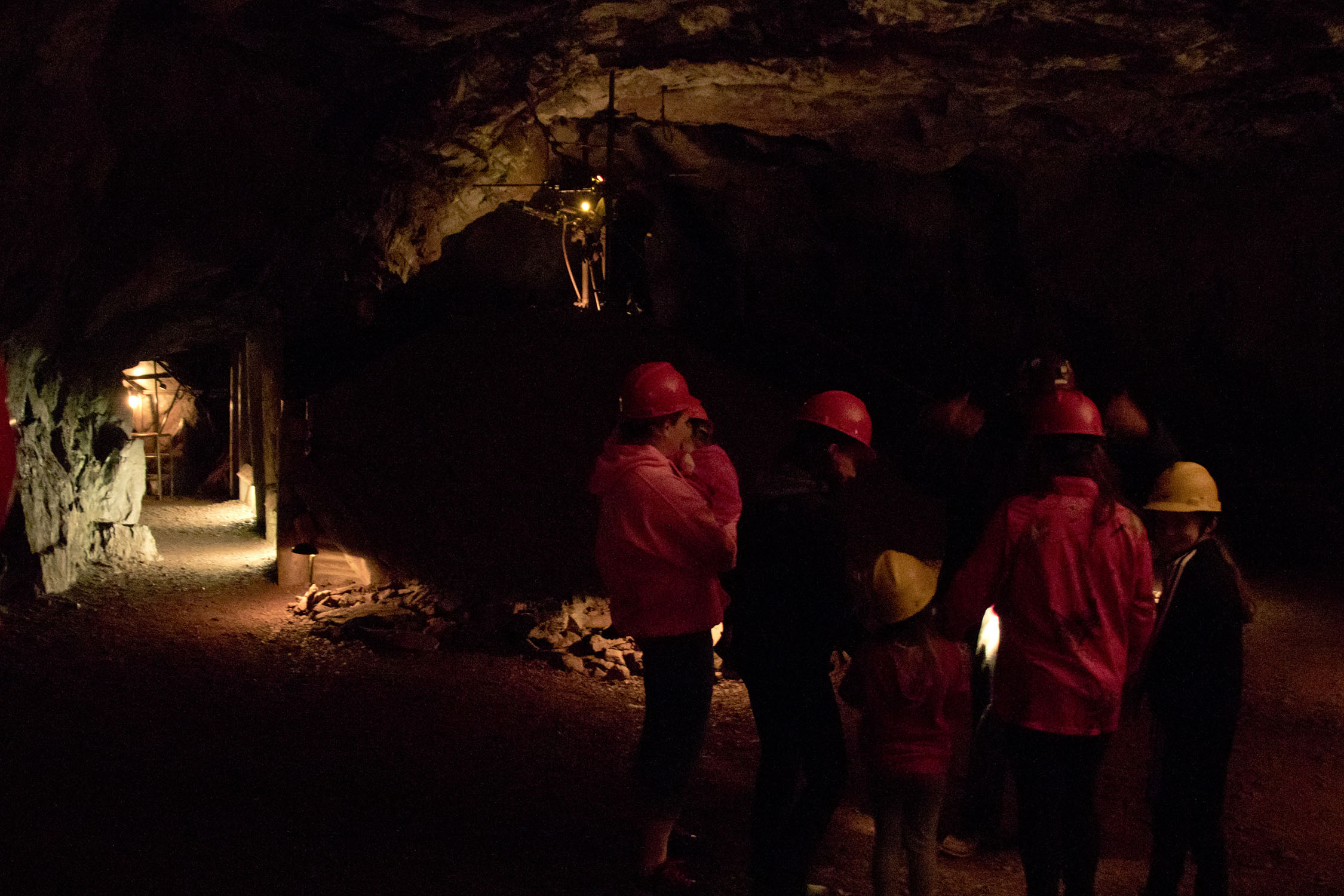 As bad as these conditions were, Soudan was referred to as "The Cadillac of Mines". The one benefit miners working here had over other mines in the area was that Soudan is a very dry mine. The impermeable rocks of the Soudan formation don't allow much penetration of groundwater, so most working areas of the mine do not have the constant seeping in of water that other mines faced.

After the mine closed, it found a second lease on life as a physics lab operated by the University of Minnesota for high-sensitivity physics instruments, particularly neutrino detection. The deep mine and the very dense surrounding rocks provided a good shield against background sources, such as solar radiation and cosmic rays that easily drown out the signal from neutrino interactions. (Neutrinos interact with solid matter only very rarely, meaning detectors may only pick up a handful from the billions passing through it at any given moment.) The first instruments were installed in 1981, but physics experiments seem to have ended in 2016, with most new experiments now being installed at the even deeper Homestake Mine in South Dakota. However, the underground lab is still used for biology experiments, such as for studying how fungi metabolize nutrients contained in mine drainage.

Seeing the pavement outcrop and doing the mine tour was a dream come true. Unfortunately, my time there was limited (it was a side stop on a roadtrip to South Dakota), so I had to ride off into the Minnesota sunset before I got much of a chance to check out more. 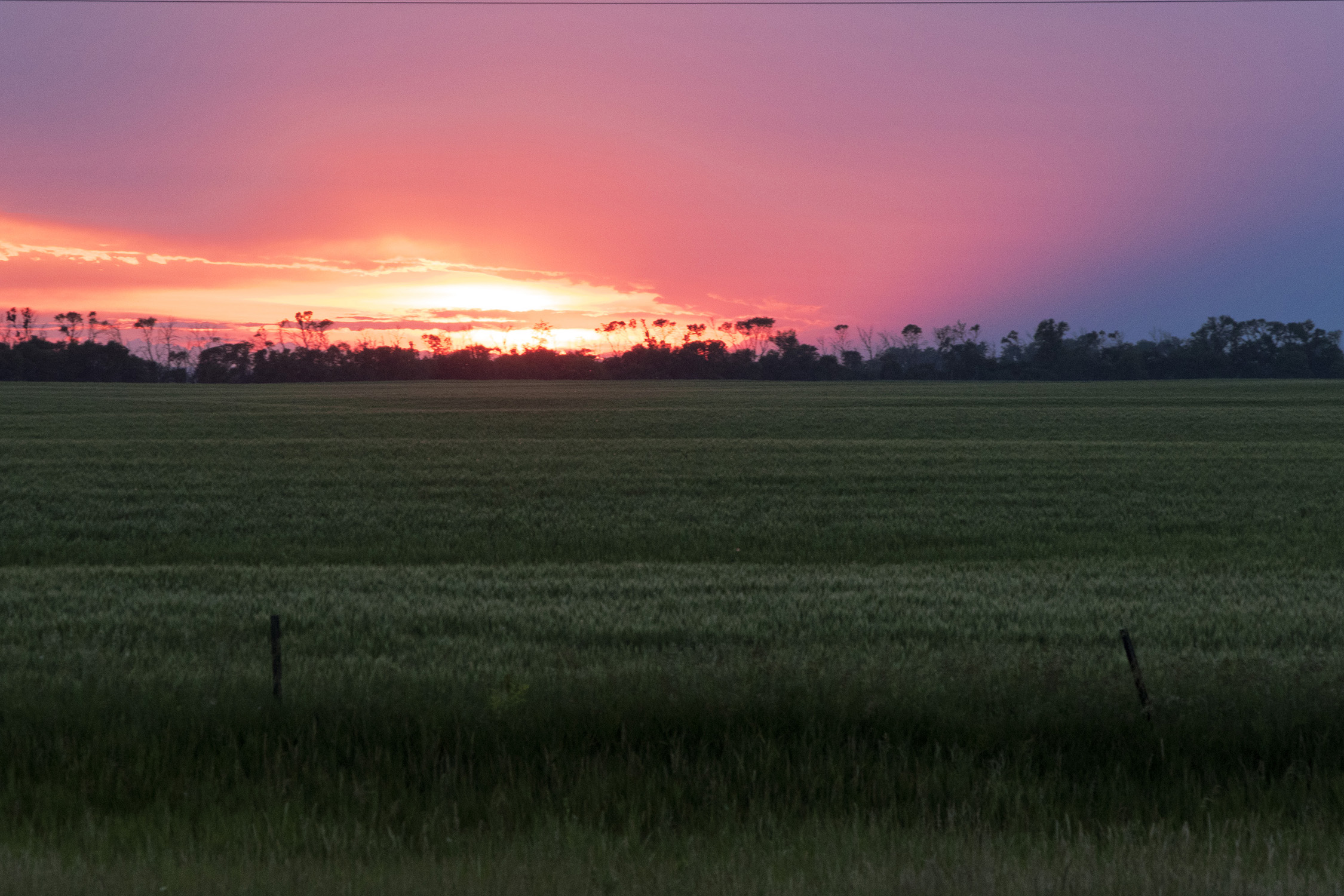