Geology of the St. Francois Mountains

When you think of the Midwestern US, igneous rocks are probably the last thing to come to mind. And for the vast majority of the midwest, that oversight is excusable! Except for a few widely scattered localities, the region is smothered in a a thick blanket of sedimentary rock. To geologists working in the midwest, deep history doesn't just mean "way back in time", it also means "way underground". Studying deep history in the midwest is an exercise in cajoling an oil company to drill just a little deeper to get a sample of basement rocks. Or, if you’re more inclined towards geophysics (you poor creature!), you can study some seismic reflection data or magnetic and gravity fields to help you get a sense of what's down there. Except…

The St. Francois (pronounced “Francis”) Mountains of southeastern Missouri aren’t really mountains by most standards. Their highest peak is a measly 540m above sea level. If you're seeking classical Alpine vistas, I recommend looking somewhere else. But it is an important locality – it’s one of the rare places where the basement rocks stick through the thick blankets of sedimentary cover in the Midwest. In fact, it’s one of the largest outcroppings of igneous geology in the region, covering some 900 km^2. 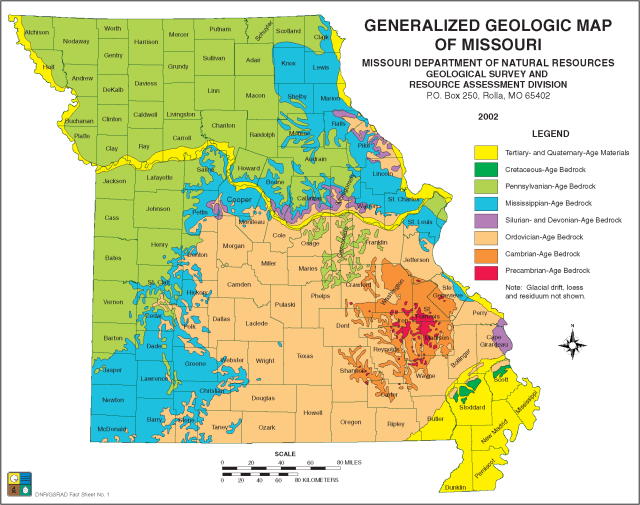 Figuring out the global geologic context of these rocks is difficult. We know from oil exploration cores, seismic reflection data, and widely scattered (and highly local!) outcrops that the St. Francois Mountains are only a small part of a vast belt of intrusive and volcanic rocks. Radioisotope dating tells us that these rocks formed during one of two phases of activity: one starting about 1.48 billion years ago, followed by another about 100 million years later. And tempting though as it may be to lump those two events together as "close" in time given how long ago they were, it's important to remember that gap in time is longer than the time between when dinosaurs last walked the Earth and today. The arrangement of the continents has changed a lot since then! Also problematic for interpreting the origin of these rocks is that they've been stripped of context by erosion. After the formation of these rocks, the geologic record goes blank for nearly 700 million years - a long, long time for erosion to do its work. 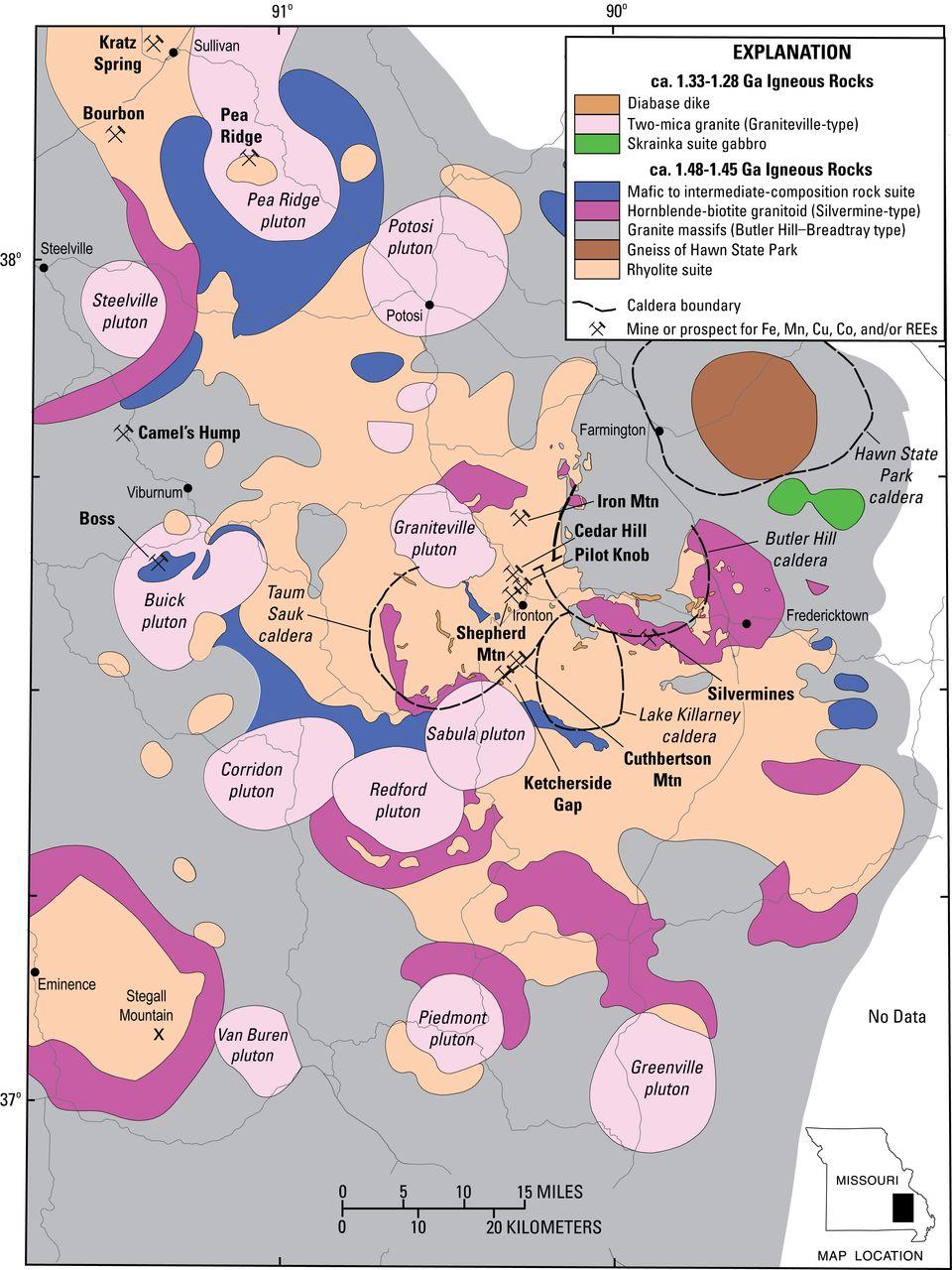 To start the task of interpreting the rocks here, we first figure out their relationships to one another. When we look at the ages of the rocks, we see that the older rocks (formed between 1.48 and 1.45 billion years ago) are generally rich in silica - granodiorite, granite (intrusive rocks) and rhyolite (extrusive rock) which tells us they formed very near or at the surface. The high silica content of these rocks tells us that they formed by melting existing crust. Silica-rich rocks also tend to erupt explosively, and we see evidence that large volcanic eruptions did occur. The rocks are cut by several ring-shaped fault systems, which are a hallmark of extremely large eruptions that formed calderas (similar to modern calderas like Long Valley, CA). Many of the rhyolites located near these ring-shaped faults appear to be ignimbrites - a glassy rock containing rock and crystal shards that is deposited by pyroclastic flows. These ignimbrite deposits are often dozens of meters thick (and to continue the comparison to Long Valley caldera, are deposits similar to the Bishop Tuff). Through correlating core samples, these rocks extend west into southern Kansas, and maybe east as far as southern Indiana. Geologists call a distinct region of rocks with a shared history a "terrane", and because these rocks are best exposed in the St. Francois Mountains, these rocks are called the "St. Francois Mountain Terrane". Confusingly, however, these rocks are surrounded by an extremely similar batch of rocks called the "Spavinaw Terrane". The only major difference between the Spavinaw and St. Francois Mountain rocks are that the Spavinaw rocks are about 50-100 million years younger (1.40-1.35 billion years old). These rocks are also exposed at the surface in NE Oklahoma (these rocks are best exposed near Spavinaw, OK), and generally parallel the St. Francois Mountain Terrane to its south. The boundary between the two terranes is fuzzy - in many places the Spavinaw rocks replaced the St. Francois Mountain rocks by intruding into them.

The St. Francois Mountains host a third, but relatively minor group of rocks that formed between 1.33 and 1.28 billion years ago. These rocks are characterized by the presence of gabbros, trachytes, and dacites - rocks that have far less silica in them than the St. Francois Mountain and Spavinaw Terranes. They rocks have odd names like syenite, trachyte, and gabbro, and are the kinds of rock you normally find when magma made its way up directly from the mantle. These rocks also contain small amounts of granite that is distinct from those found in the St. Francois Mountain and Spavinaw Terranes. The main difference appears to be that these granites formed by the extremely slow cooling of the silica-poor rocks, which increased the relative proportion of silica as low-silica minerals crystallized from the melt.

With these features in mind, we'll jump back to a general outline of the world as we think it was 1.4 billion years ago. North America was a smaller continent called Laurentia - roughly half of what we now know as North America was either attached to other continents or hadn't formed yet. Laurentia stretched from roughly the crest of the Applachian chain to eastern Utah in its east to west dimension; from north to south it stretched from the Canadian arctic to the Ohio River Valley. The general reconstruction of continental positions at the time has Laurentia was also rotated about 90 degrees clockwise relative to modern North America, with the Appalachian region near or along the equator. Several hundred kilometers of open water separated the southern coastline of Laurentia from the Kalahari Craton (a landmass that is now located in the Kalahari Desert) to the southwest and the Rio Plato and Amazonia Cratons (now central South America) to the southeast. These landmasses were slowly converging, and would eventually collide sometime around 1.3 to 1.2 billion years ago as part of the formation of a supercontinent named Rodinia.

A few hypotheses for the formation of the St. Francois Terrane have been proposed. One is that the St. Francois Terrane is an older version of the Niger-Nigerian alkalic ring complexes. These formed along an ancient boundary in the African crust where two parts of the plate failed and slipped along each other. Beginning with the early stages of Pangaea's breakup, hot magma from the mantle began to rise along this boundary and melt the existing crust. This formed a series of large caldera complexes, pyroclastic deposits, and lava flows. The types of granite that crystallized around the caldera ring faults are extremely similar to those found along the ring faults in the St. Francois Mountains, suggesting a similar origin. The St. Francois Mountains are also located along a known weak zone in the North American crust that runs roughly along the 38th Parallel. But similarities aside, the cause of extension is unclear.

Another suggestion is that the St. Francois Mountains are located along a hot-spot track. An analogous structure would be the Yellowstone hotspot, which has torched its way from the Columbia River Plateau across the Snake River Valley to its current location. Over the last 16 million years, that hotspot has created a chain of large calderas across southern Oregon and Idaho. A mixture of silica-poor and silica-rich rocks is not uncommon with hotspots in continental settings. While there’s a significant volume of basalt covering the surface in its wake, most of the erupted material is more silica-rich, and numerous rhyolitic/granitic intrusive rocks formed by its passage can be found at the surface. It’s possible that the equivalent basalts erupted by a theoretical St. Francois hotspot were stripped away during the long period of erosion that followed their formation, leaving behind only the rhyolites and granites. However, the timing of the silica-poor and silica-rich rocks in the St. Francois region is the opposite of what would be expected by a hotspot passage.

More recent chemical analyses have been used tp suggest that the subduction hypothesis was right all along. Although the dry melts are dominant, more sensitive chemical analyses suggest that a wet component was mixing into the melts. It could be that the existing crust in this region was unusually thick or unusually dry, and that the wetter subduction-related melts were diluted before crystallizing.

Although the geologic setting of the St. Francois Terrane is not settled, it does provide a number of rich outcrops to explore. Many of these outcrops are a nice change of pace from the more sediment-dominated geology of the Midwest. With this background in mind, let's start exploring the geology of the region in detail!

An extremely detailed overview of the St. Francois Terrane produced by the Missouri Department of Natural Resources is available here.