Sunset Crater is one of the most famous cinder cone volcanoes in the United States. Formed within the last 1000 years, it is also one of the youngest such volcanoes in the contiguous United States. Its English name was given by the explorer John Wesley Powell, who, waxing poetic about its "rose-hued cap" remarked "The contrast in the colors is so great that on viewing the mountain from a distance the red cinders seem to be on fire. From this circumstance the cone has been named Sunset Peak. It appears to be perpetually bathed by the rays of the setting sun...it seems to glow with a light of its own" The Native groups in the region used similar names for the mountain, the Navajo calling it Dzil bilatah litso (Yellow-Topped Mountain) and the Hopi calling it Polotsmo (Red Hill). The volcano's names come from the dull red and yellow rocks ringing the summit crater, which have been colored by oxidized magmas erupted during the final phases of the eruption, and which were subsequently altered with yellow sulfur-rich gases released from fumaroles. 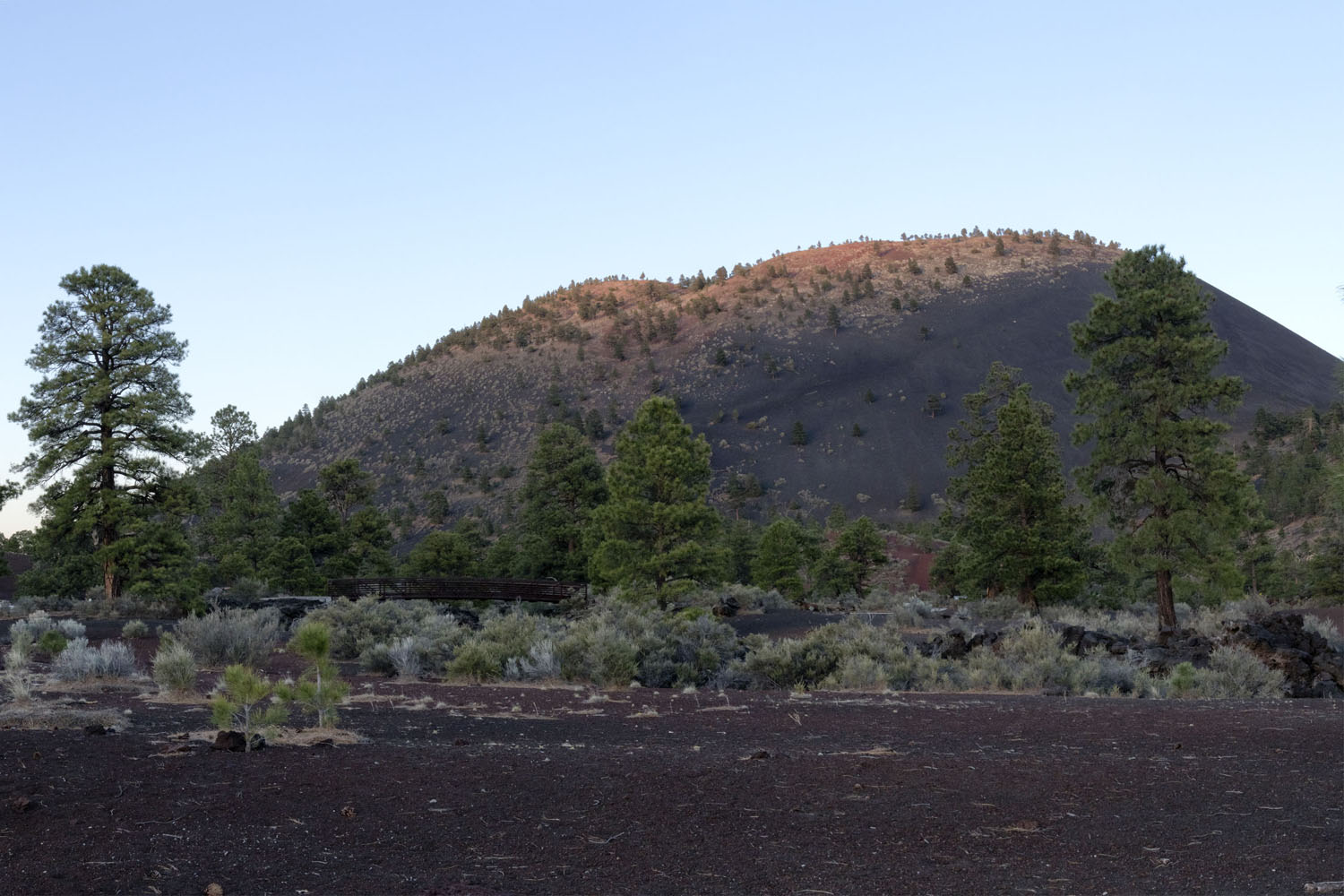 The eruption is classically cited as starting during the years 1064-1065 A.D. based on stunted tree rings used in the construction of pueblo rooms in the nearby Wupakti National Monument by archeologist Harold Colton. Geologists Gene Shoemaker and Duane Champion collected paleomagnetic data of surrounding lava flows associated with Sunset Crater, which they used to suggest that eruptions continued intermittently until around the year 1250 A.D. However, this roughly 200 year eruptive period would be unusually long for a cinder cone eruption, which typically occur as a single continuous eruptive period lasting 10-20 years before reaching a permanent conclusion.

Recent re-evaluations have suggested that the Sunset Crater eruption began in the year 1085 A.D. Sunset Crater sits at the western end of a roughly 5 km fissure system, suggesting that the eruption began with a long curtain eruption that gradually consolidated to a single location at Sunset Crater. his fissure can be seen as a line of red rocks running from the southeastern corner of Sunset Crater to Double Crater. 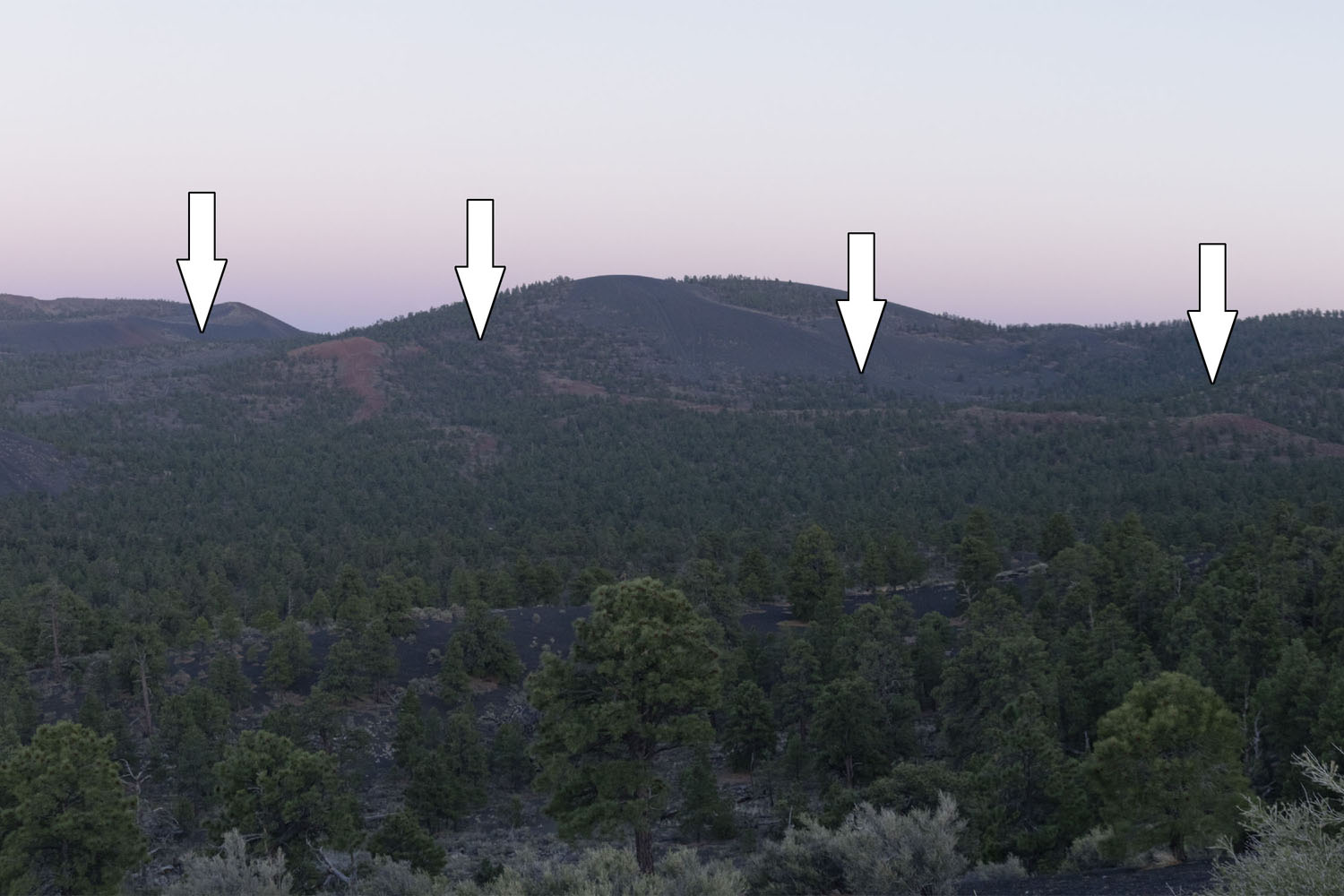 After activity consolidated at this site, the large amount of lava being erupted produced the Kana-a pahoehoe flow, which generally follows the Forest Service road that continues past Sunset Crater and towards Wupatki Nat'l Monument. As it formed early in the eruption sequence, it is difficult to see through the air. This is because it was later buried by cinders produced by Sunset Crater, which provide a foothold for vegetation on the otherwise solid lava rock. Interpretations of Native oral traditions surrounding the event suggest that the eruption soon turned more explosive, with their stories hinting that the main cinder cone-building phase was characterized by Strombolian-type behavior. This behavior is marked by very regular small explosions created as gasses released from the magma get trapped in the subsurface. (At the type region in Stromboli, these explosions can get into a groove, with eruptions being predictable to the minute for hours or days on end.) 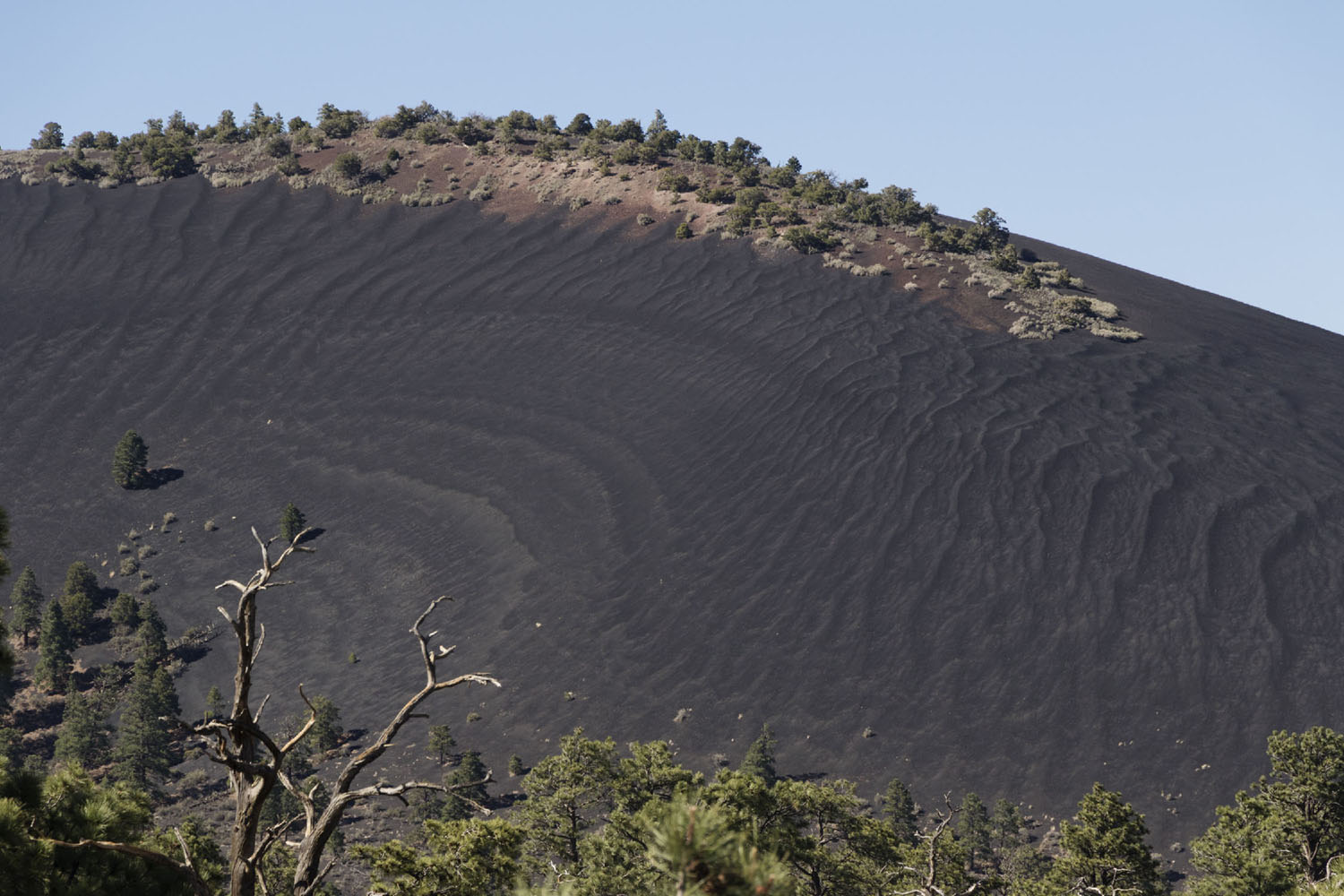 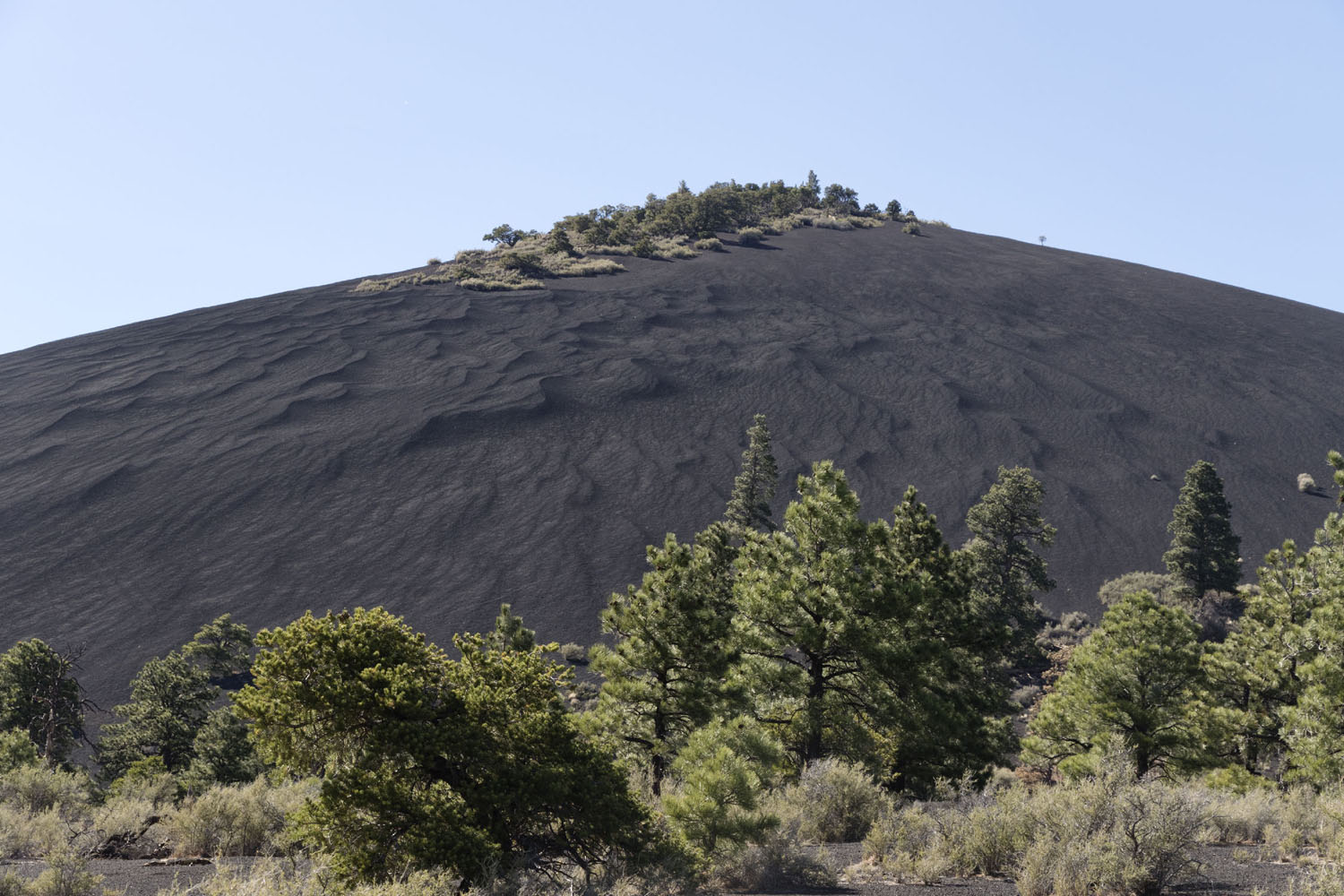 This phase is estimated to have continued for ~30 years. Sometime around the year 1125 A.D., the lava became slightly more fluid, forming a lava flow around the base of Sunset Crater (the Bonito a'a flow). The formation of this flow is generally considered to mark the end stage of the Sunset Crater eruption, as cinders are relatively rare on its surface, and mostly occur as small blocks that landed on its surface very close to the volcano. The Bonito lava flow extends about 2.5 km (1.6 mi) from the base of Sunset Crater into the relatively flat land to its west, covering about 4 sq km (1.5 sq mi) of land in total. Near its center, the Bonito lava flow is upwards of 30 m (100 m) thick, thinning in places around its edges to only 1.5 m (5 feet) thick. Most of the flow consists of blocky a'a lava. This relatively cool and sticky lava tends to break as the flow moves, dragging a jagged wall across the landscape. 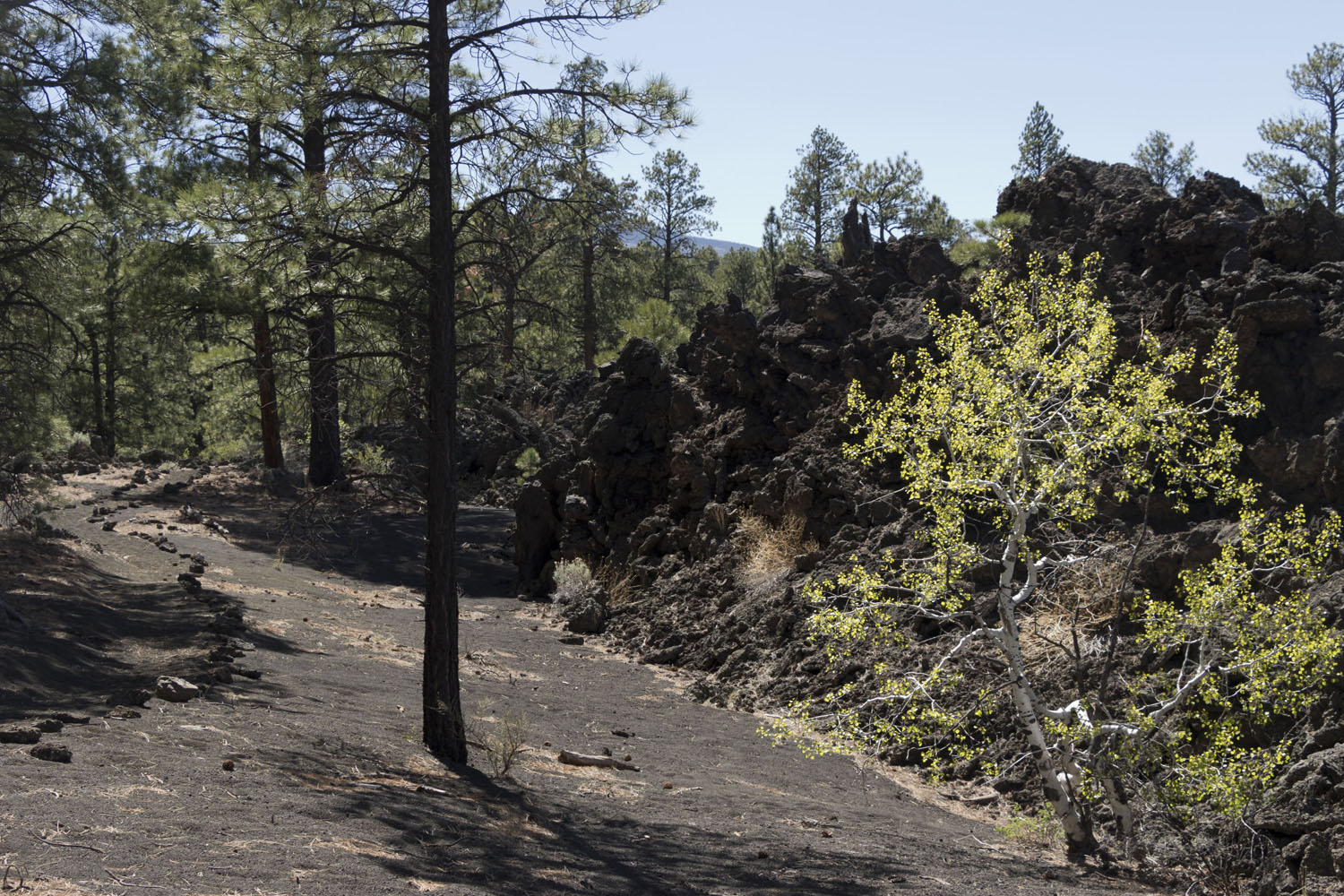 However, evidence of hotter (and runnier) lava moving underneath the surface is visible in places where ridges of a'a cracked and released the lava flowing beneath its surface: 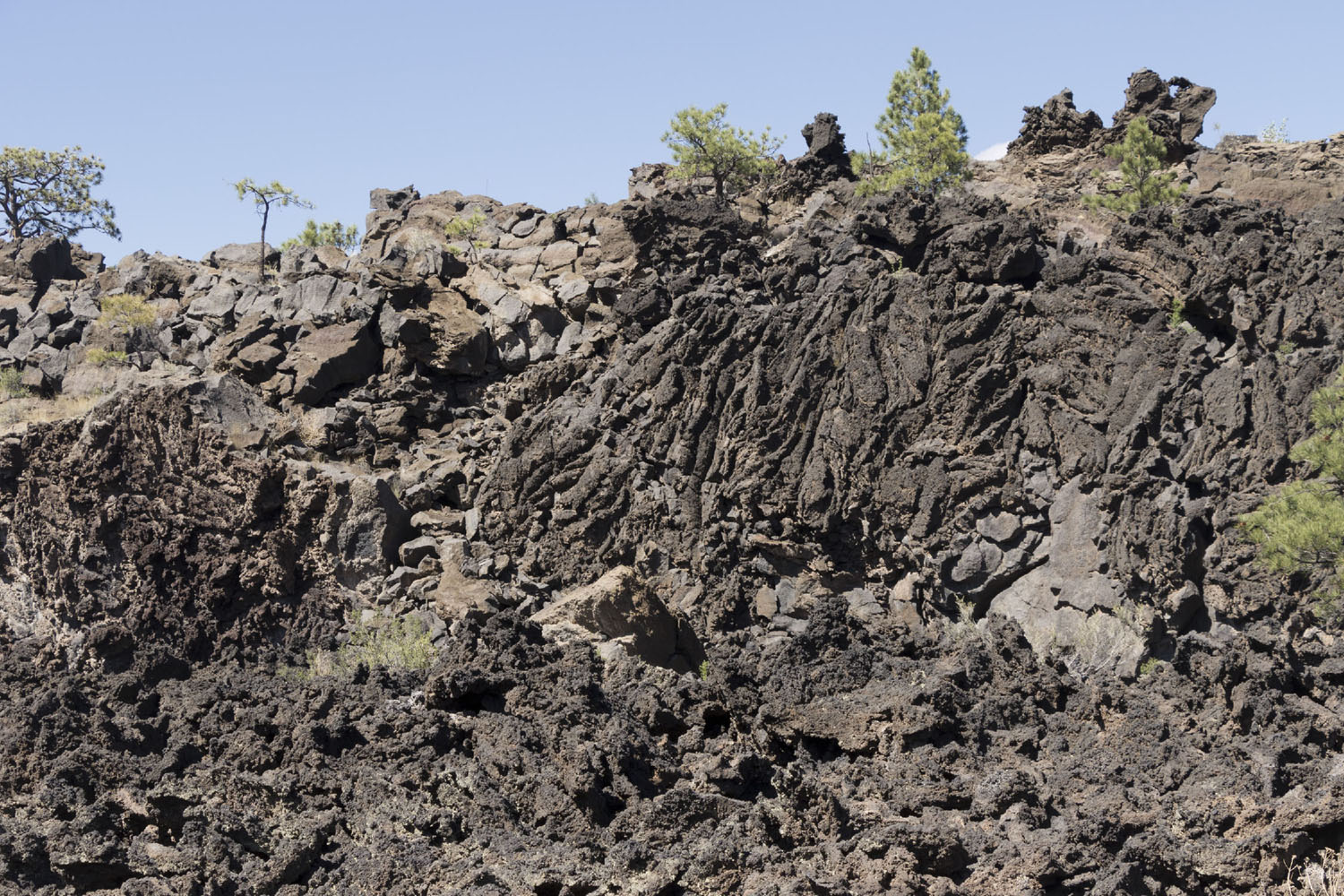 A close look at the Bonito lava flow will turn up scattered xenoliths, or blocks of rock that aren't lava. These rocks were dredged up by movement of magma in the subsurface, then carried along by the lava flow. This particularly large xenolith appears to originate from the Coconino Sandstone. I saw several other xenoliths in this area that looked like Coconino as well. 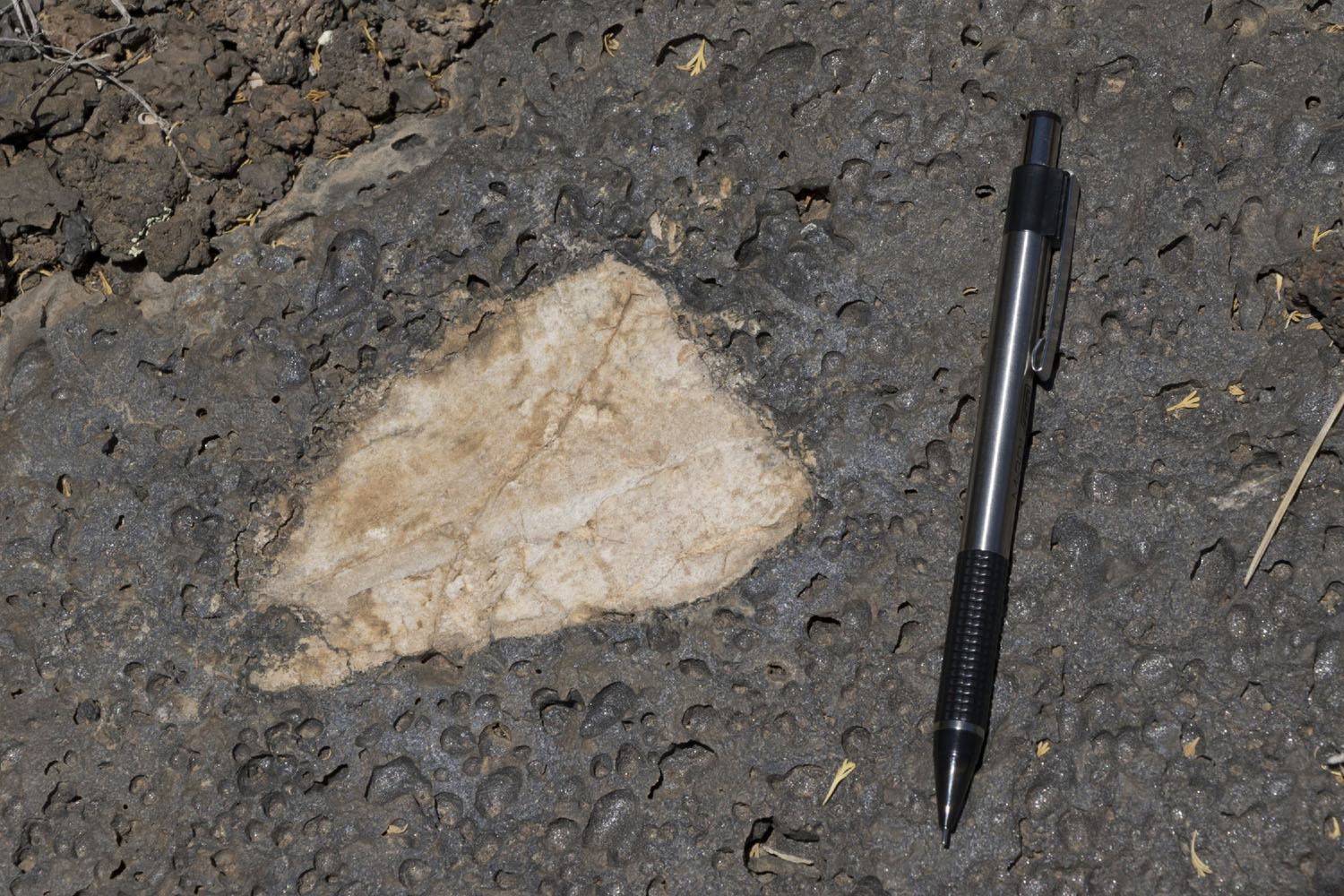 The Sunset Crater eruption sequence profoundly altered the surrounding environment, likely killing much of the pine forests that existed in the zone around the crater, the recovery in the millenium since has been very different on and off the Bonito lava flow. On the cinders, some semblance of normalcy has been restored, with thick pine forests again dominating the landscape. However, the crevasse-ridden and oven-hot landscape of the Bonito lava flow has prevented much life from returning. Most life that has managed to reclaim the barren lava flow has done so near the edges of the flow, where crevasses reach the underlying cinders in view of sunlight: 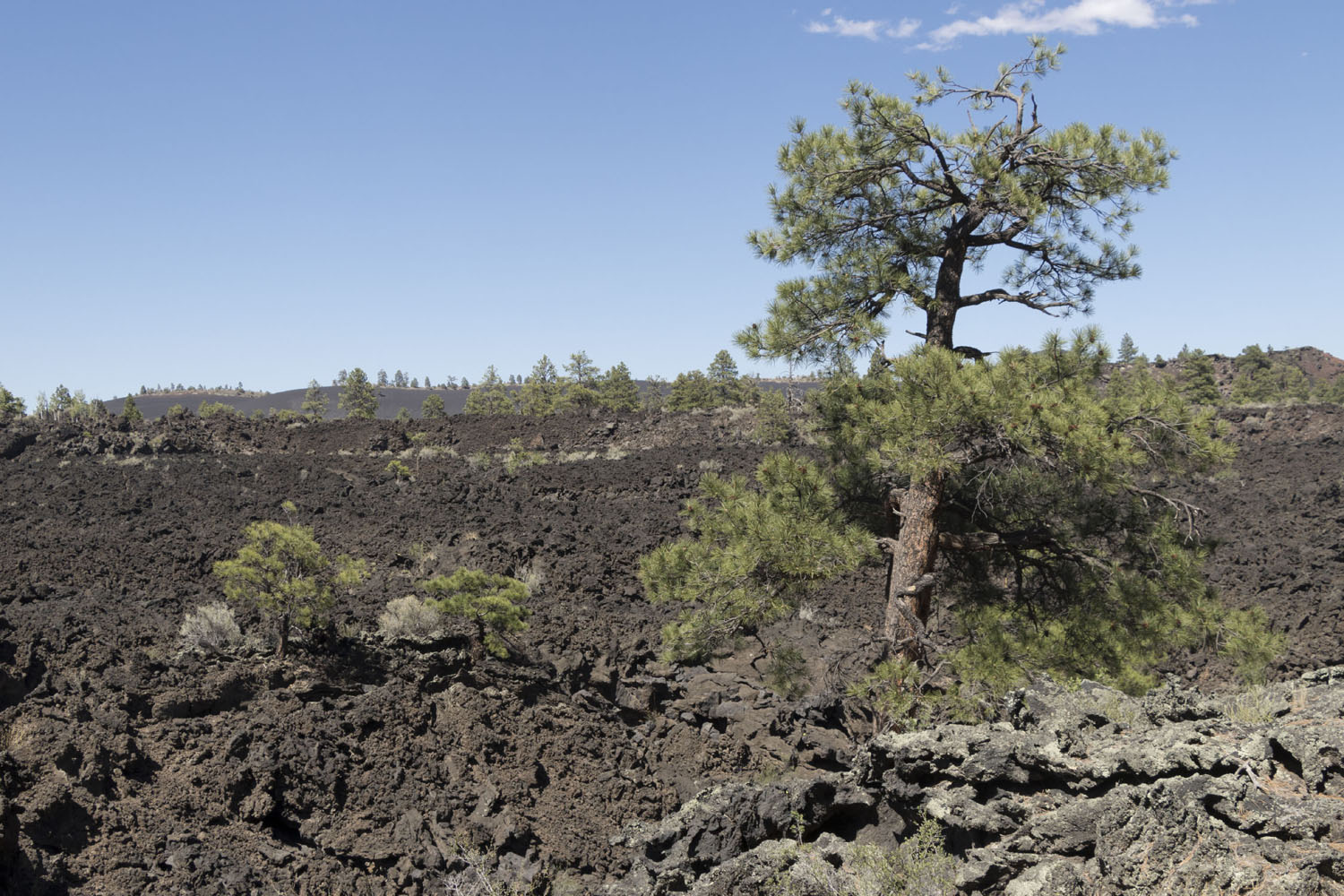 Some of the local wildlife has adapted to living on the lava flows. 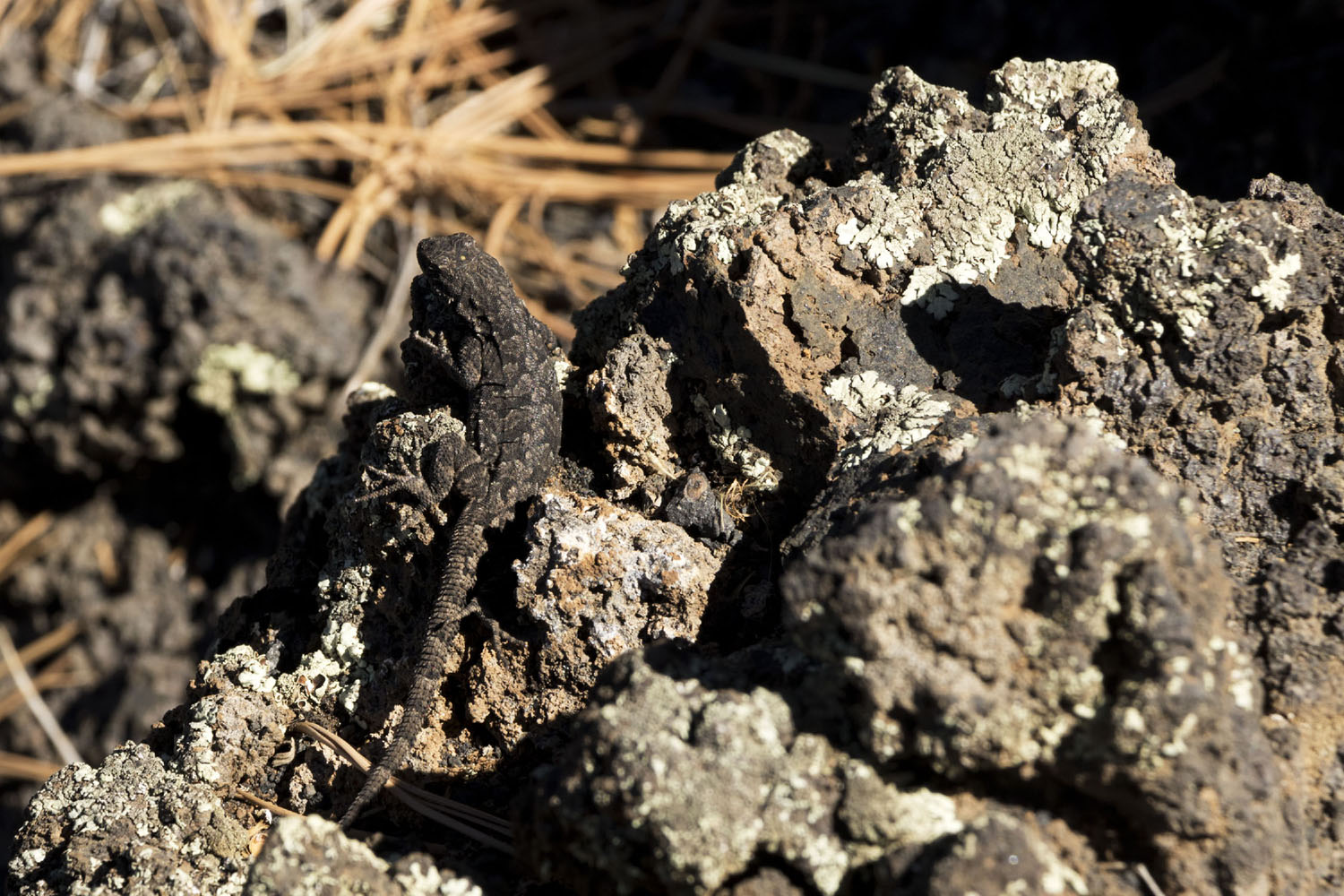 The prodigious amount of cinder erupted by Sunset Crater may have sparked a population boom in the region. The eruption coincides with a building boom of pueblos to the north, with several buildings in the Wupatki National Monument appearing around this time. Some archeologists argue that the deposition of cinders on the desert landscape may have temporarily improved agricultural conditions in the region. The cinders may have acted as a moisture trap, preventing water from soaking into or running off the desert hardpan. In addition, the dark cinders would have absorbed heat, helping keep plants warm during the cold summer nights. 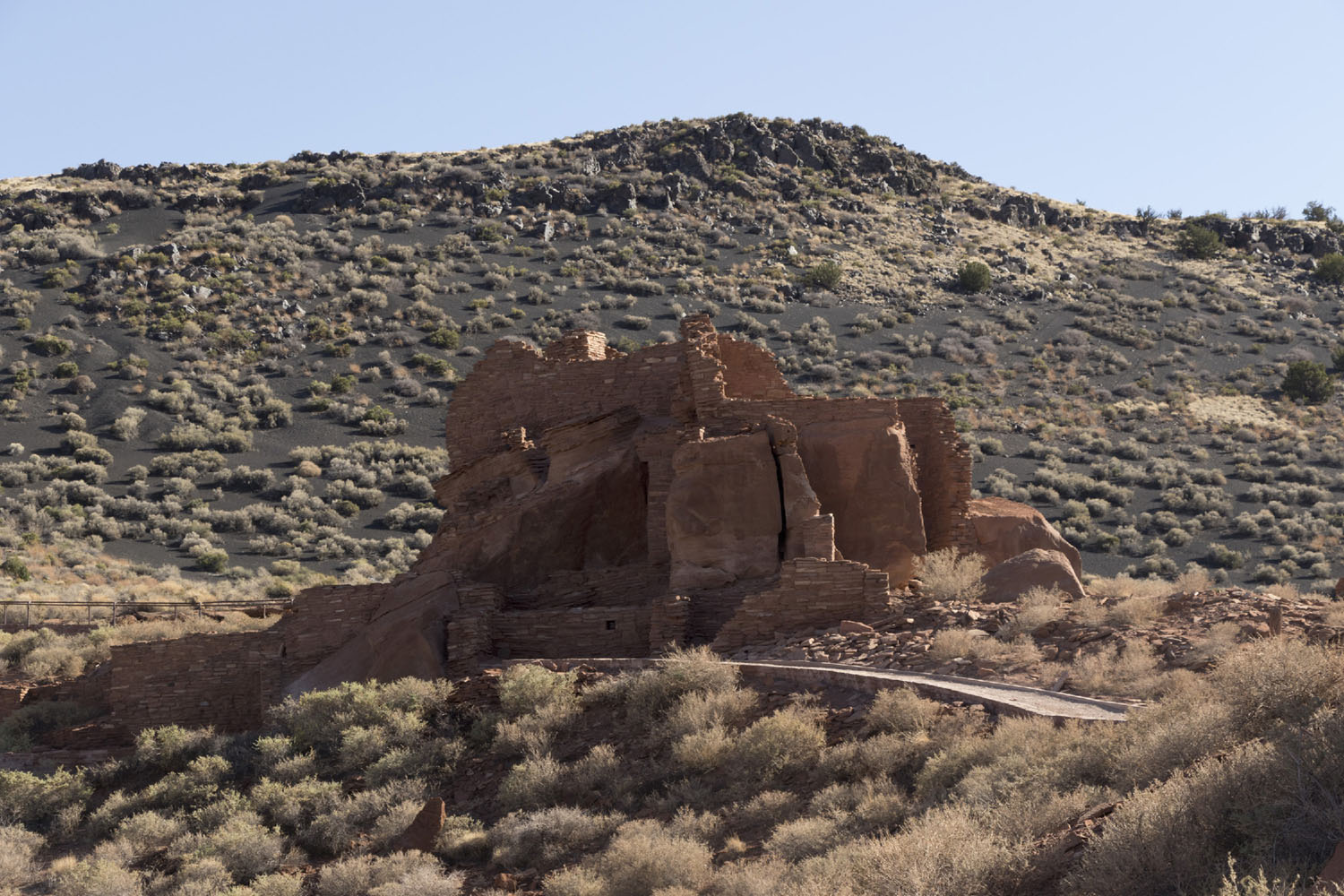 However, the cultural draw of Sunset Crater has not always been a positive one. In the 1920s, Hollywood considered exploding a large bomb in the crater to simulate an eruption and landslide. This early plan to leave a permanent change in the landscape in pursuit of short-term viewer engagement drew extreme local backlash, leading to Herbert Hoover to designate the volcano as a National Monument in 1930. However, this designation brought destruction of a different kind: scores of hikers who were drawn to the summit, causing severe erosion along the path they took. Although this trail was closed in 1973, the damage is still visible nearly 50 years later. The desert landscape is slow to heal, and even short-term mismanagement can cause severe and permanent damage. When visiting, treat it with care.