On January 13, 2007, the Mars Reconnaissance Orbiter was targeted to look at a fresh-looking impact crater in Mars' Tharsis region. The resulting images provide an interesting case study in what happens when a small asteroid collides with Mars. On this page I'm going to walk through some of the observations that can be made from this image set and describe what those observations tell us about the impact process. 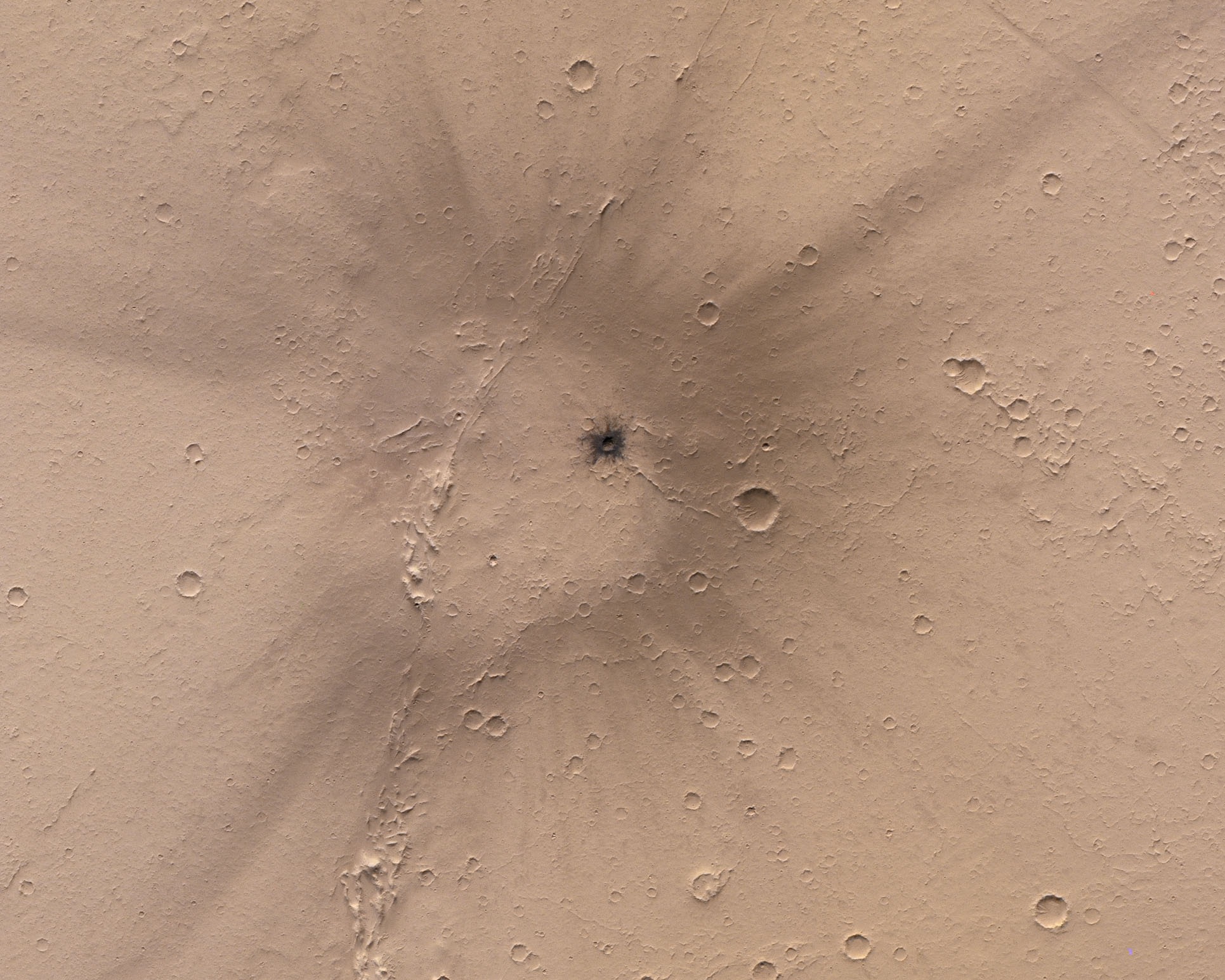 The above image is a black and white image made with the spacecraft's CTX camera which has an image scale of ~5.7 meters per pixel. I colorized this image with an image from the CRISM spectrometer (scale ~18 meters per pixel), which was collected at the same time as the CTX image. The first-order observations we can make are:

The relationship between a crater's size and the size of the impactor that created it depends on several factors, including the impactor's density (is it a comet? crumbly asteroid? iron-nickel lump?) and how quickly it ran into the ground. But playing around with some reasonable values with Jay Melosh's and Ross Beyer's crater diameter calculator, we can say the size range of the impactor was probably 1 to 3 meters in diameter, with iron-nickel meteorites on the lower end and cometary material on the upper end. It doesn't take a lot to cause a bad day!

The darker ejecta is pretty easy to explain. Mars' famous dust is pinkish-yellow, and the Tharsis region is covered with it. Looking at several of the small craters surrounding the impact site, we can note that many of them contain a substantial amount of dust. Some of them are nearly buried in it! The Tharsis region also hosts Mars' most famous volcanoes, and the entire region is covered in lava flows. In fact, the ridge that runs roughly through the center of the image is probably the edge of one such lava flow! The darker rock exposed in the impact ejecta is consistent with the crater blasting through the dust and excavating the underlying rock. We can use this to place an upper limit on how thick the dust was at the impact site. Small craters like this typically have a depth:diameter ratio of ~1:10. This means that this 103 m diameter crater is approximately 10 meters deep. Since the crater excavated the underlying lava flows, we can say that the dust is at most 10 meters thick.

Finally, we can see that the crater is surrounded by a large halo of darker material, which is probably where dust was blown off the surface by an incredibly powerful airblast created by the impactor's journey through the Martian atmosphere. The airblast is a shockwave which is created by both the impactor's hypersonic velocity through the atmosphere, and by the explosive detonation of the impactor as it is broken apart by air pressure. The airblast could almost be considered the thunder to the impact's lightning.

A closer look at the area affected by the airblast can tell us a bit more about what happened during this particular impact. Some observations:

The airblast is essentially a cone-shaped shockwave moving in the same direction as the impactor, and spreading outwards. The light-toned center is the result of the "Ground Zero" effect - here the part of the shockwave reaching the ground is primarily moving downwards and presses the dust into the surface instead of blowing it outwards. The diameter of this region is ~2.3 km. Outside of this region, the shockwave intersects the surface at increasingly shallow angles, which is more effective at stripping dust from the surface. The force of the airblast was enough to clear the surface of dust off rocks in a region ~5 km in diameter. Beyond this point, the shockwave was no longer strong enough to remove dust from the surface, although it was still probably strong enough to move it around. The rays are the result of some areas of the shockwave being more focused or having higher energy, which extended the region of dust blasting up to 10 km from the impact site.

Impact craters themselves rarely contain much information about the direction of travel, because the transfer of energy to the surface is essentially a point-source explosion. It isn't until the impactor hits the surface at a very low angles (usually less than 20 degrees from horizontal), that the energy is smeared enough in the downrange direction to form an elliptical crater. This crater is circular, so the impact must have approached at an angle greater than 20 degrees. But in this case, the airblast does contain some information about the impact direction. We can see that the airblast isn't centered on the crater, and the reason for this is that the airblast is associated with extremely hot air, which is attempting to rise due to its buoyancy relative to the surrounding air. The much greater downward momentum of the shockwave mostly countered this buoyancy, but it was enough to carry the airblast about 700 m further downrange than the impactor. This offset tells us that the impactor was approaching the surface from the top right, moving towards bottom left.

We can also see that the blast effects were somewhat altered by the interaction with topography. This also tells us that the impactor was moving from top right to bottom left, because the dust is disturbed all along the left side of the ridge. If the impactor had been approaching from bottom left, this side would have been subjected to the "Ground Zero" effect by the parts parts of the shockwave moving downwards. Instead, this part of the shockwave was blocked, allowing the higher parts of the shockwave with more outward motion to strip the dust. Interestingly, in a couple of places we can see rays extending from low areas of the ridge, which also tells us the topography was helping focus the shockwave in those directions.

So how old is this crater? It's difficult to tell, but probably no more than a few decades at most. The Tharsis region is effectively a large dust trap. Dust storms are rarely observed here, which suggests that the wind rarely blows strongly enough to remove dust from the surface. With the constant fallout of dust lifted into the atmosphere in other regions, any surface markings are slowly buried over time, and only a few millimeters of dust are needed to completely obscure these markings. However, the Martian surface has been under almost continuous monitoring since the arrival of Mars Global Surveyor (MGS) in 1997. Both MGS and the Mars Reconnaissance Orbiter have instruments that image the entire Martian surface at ~1-2 km per pixel imaging scales daily. The blast zone here is large enough to be noticed as a change in those images, and this crater isn't listed in recent studies of new impact craters on the Martian surface, so it is apparently older than 1997.