The small town of Arcadia (pop. 608) sits squarely in the middle of the St. Francois Mountains. The scenery here is great, and land developers knew it: in its heyday during the late 1800s and early 1900s, the area around Arcadia was the vacation spot for the well-to-do of St. Louis. But R&R wasn’t the only economic tie between Arcadia and St. Louis. Arcadia's quarries are literally the foundation of numerous St. Louis landmarks. Local quarry workers produced an abundance of architectural stone, pavers, riprap, and grave markers for St. Louis as it grew into a national industrial center. Looking towards the town of Arcadia from Elephant Rocks

The granite powering Arcadia's industrial-era fortunes was once magma powering the massive volcanic eruptions in the St. Francois Mountains. Once buried at least a couple thousand meters below the surface, erosion and regional uplift have brought it to a modern position several hundred meters above sea level. Where the granite breaks the surface, it creates a geological featured called a tor, or a rocky hill. Many of the tors in the Arcadia area no longer exist, since the exposed rock lends itself to easy quarrying.

Elephant Rocks State Park encompasses one such tor, and is named for the giant pink boulders of granite scattered across an otherwise barren surface. Like many of the nearby granite outcrops, it hosted quarries. The earliest opened in 1869, and the first rocks quarried were used in the construction of the Eads Bridge spanning the Mississippi River at St. Louis. It can be spotted in the bridge's river piers, although the granite's famous bright pink has faded to a dull brown from grime. Once construction of the bridge was completed, the quarry’s stone was used to build St. Louis’ network of river walls and city streets. Activity chugged along until the 1950s, when the industrial activity in St. Louis began to decline. After the quarry closed down, its owners donated the land to the State of Missouri for use as a park. It was designated a state park in 1967. 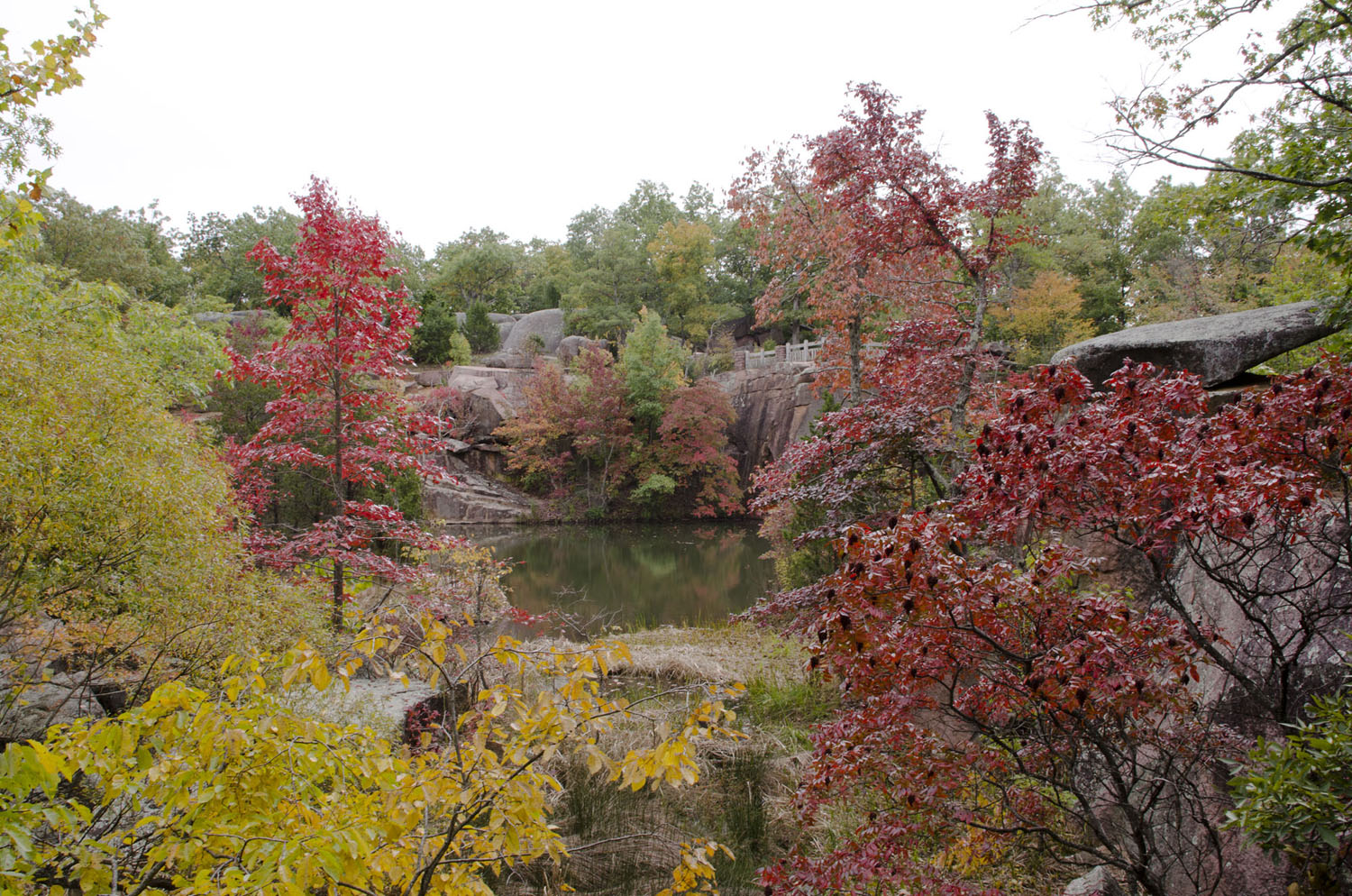 The park's namesake boulders are a product recent erosion. As the magma chambers crystalized into granite, the cooling rock contracted and created a network of cracks (or joints, in geology parlance) that shot through the granite. As the overlying rock eroded away, rain water - slightly acidic from dissolved atmospheric carbon dioxide - seeped below the surface along joints. The acidic water slowly etched the granite along joints, loosening mineral grains and widening the joints by a few cm every millennium. By the time erosion had cut down far enough to start exposing the granite, it had disintegrated to the point where large boulders “floated” in gravelly piles of their own debris. Rain scooped away the gravel (known as “grus” or rotten granite), gently lowering the boulders onto more pristine granite.

The end result is this: The largest boulder, nicknamed Dumbo, is 9 meters (27 feet) tall. In addition to the handful of boulders near the park's summit, numerous other boulders once topped this hill. Many of them eventually rolled down the steep slopes of the tor, and with no major obstacles to stop them, piled up into a maze near the hill's base.

Let’s take a moment to have a closer look at the granite at Elephant Rocks, which is formally called the Graniteville Granite: 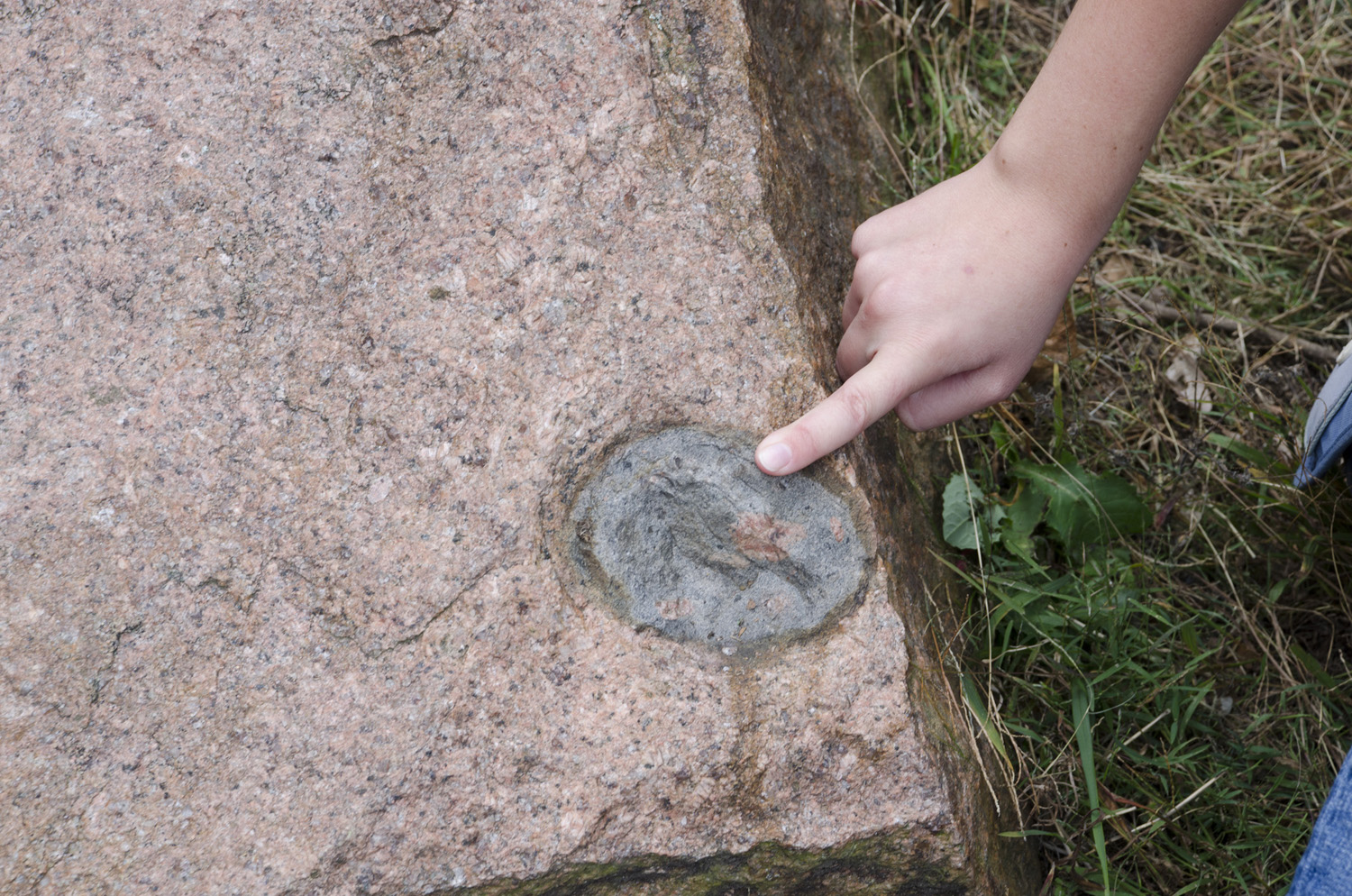 This piece of granite resides near the old quarry's blockhouse. It's pretty typical of the Graniteville Granite – pinkish potassium feldspar, light gray plagioclase feldspar, and dark translucent quartz in roughly equal quantities. What is unusual is the large gray blob. This blob is dominated by tiny crystals of plagioclase, as well as hornblende and biotite - minerals that are rich in iron. This interloper is called a "mafic enclave", as its minerals are more mafic (or more iron-rich and silica-poor) than the host rock. The blobby nature of this enclave is because felsic melts (such as those that form granite) and mafic melts (those forming the blob) are immiscible with one another. In a way, it is similar to a drop of vinegar floating around in oil.

This enclave hints at the processes that produced the Graniteville Granite. For one, it implies a bimodal composition of the area's magma in this area - there was a granite-producing felsic melt, and an enclave-producing mafic melt. Going back to the overview of the region, remember that I said the granites formed from an unusually dry melt. Magmas with bimodal compositions typically form when dry mafic melts originating from the mantle cool very slowly, with crystallization of silica-poor minerals slowly enriching the melt in silica and slowly separating out by density. Blobs of this melt can continue rising, where they become even more rich in silica by incorporating the surrounding crust. These melts slowly cool into granite, but occasionally small blobs of the deeper mafic melt are dredged up as magma continues to be supplied to the system. The presence of the mafic enclave here helps explain the unusual composition of the region's rock.

Additionally, we can glean from the enclave that the magma chamber was in the process of crystallization when it formed. If you look carefully, you can see small bits of granite inside of it. Because the melts are immiscible and would have separated had both been liquid, it's likely that these blobs of granite had crystallized before being plucked and incorporated into the enclave. The enclave was apparently hot enough to remelt the granite, since they now have a blobby appearance, but they cooled at the same rapid rate as the enclave, because they appear to be finer-grained than the rest of the surrounding granite.

Interestingly, mafic enclaves are really common around the quarry blockhouse, and much harder to find in the rest of the park. This tells us that this area of the magma chamber probably had a pool of mafic material nearby, or was located close to a dike feeding new magma to the magma chamber. The density of mafic magmas also implies that the modern surface near the blockhouse was probably near the bottom of the ancient magma chamber that produced the Graniteville Granite.

Moving on through the park we can see examples a modern erosional feature, solution pans: 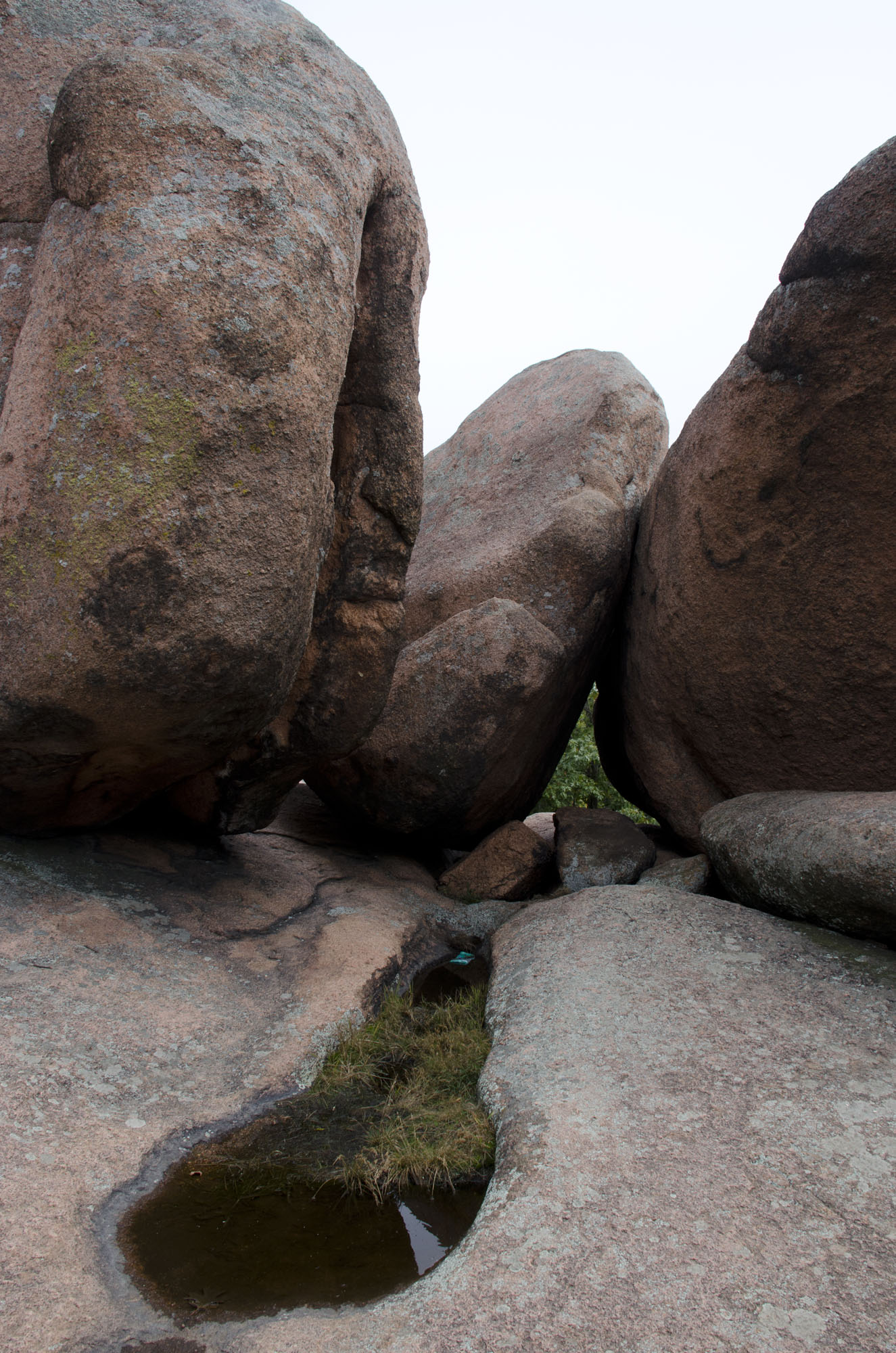 Solution pans (also called panholes) are shallow flat-bottomed pits on the granite surface. Panholes begin to form when water accumulates in a small basin capable of retaining water long enough to support small plants like mosses. The mosses spread their rhizomes into the rock along mineral grains, loosening the grains and allowing them to be carried away by water. Plant matter also begins to accumulate in the growing basin, creating tannic acid, which further acts to erode the surface. Eventually the basin grows large enough that it contains water for long periods of time, at which time it begins to grow laterally far faster than it does vertically. A panhole is born. In addition to small plant life, panholes also play host to mosquito larvae and tadpoles. Don't confuse panholes with potholes, which are deeper than they are wide, and form as water tumbles gravel around in a depression!

Personally I think panholes, especially those at Elephant Rocks, have a primeval quality to them. They are a small, self-contained ecosystem where the drama of life’s history plays out in miniature. It’s not hard to imagine them as the shoreline of an ancient ocean, colonized only by moss and algae, where amphibians take their first hesitant steps onto dry land and tiny insects fly off into the vast, unsettled wilderness beyond. It’s strange how despite the encroaching modernity, the surface of this 1.5 billion year old granite can retain an ancient character.