One thing geologists like to do is find where rocks of different types come into contact with each other. By studying the relationships between these rocks, we can get a sense of the sequence of events that took place. Unfortunately in the Midwest, outcrops that provide this information are in relatively short supply. Most of the rocks are flat-laying and covered with thick mud and growths of vegetation. Relationships have to be inferred from the fragmentary exposures we're given. Tiemann Shut-Ins, though, is a rare location where we can trace out a sequence of events by simply looking at the outcrop. Tiemann Shut-Ins are located in the Millstream Gardens Conservation Area, only a short distance southwest of the Highway 72 roadcut exposing the Great Unconformity. Here erosion has removed the Grassy Mountain Ignimbrite and begun to cut down into the underlying intrusive rocks. Here's one of the best exposures of the outcrop, see if you can figure out the sequence in which these units formed: 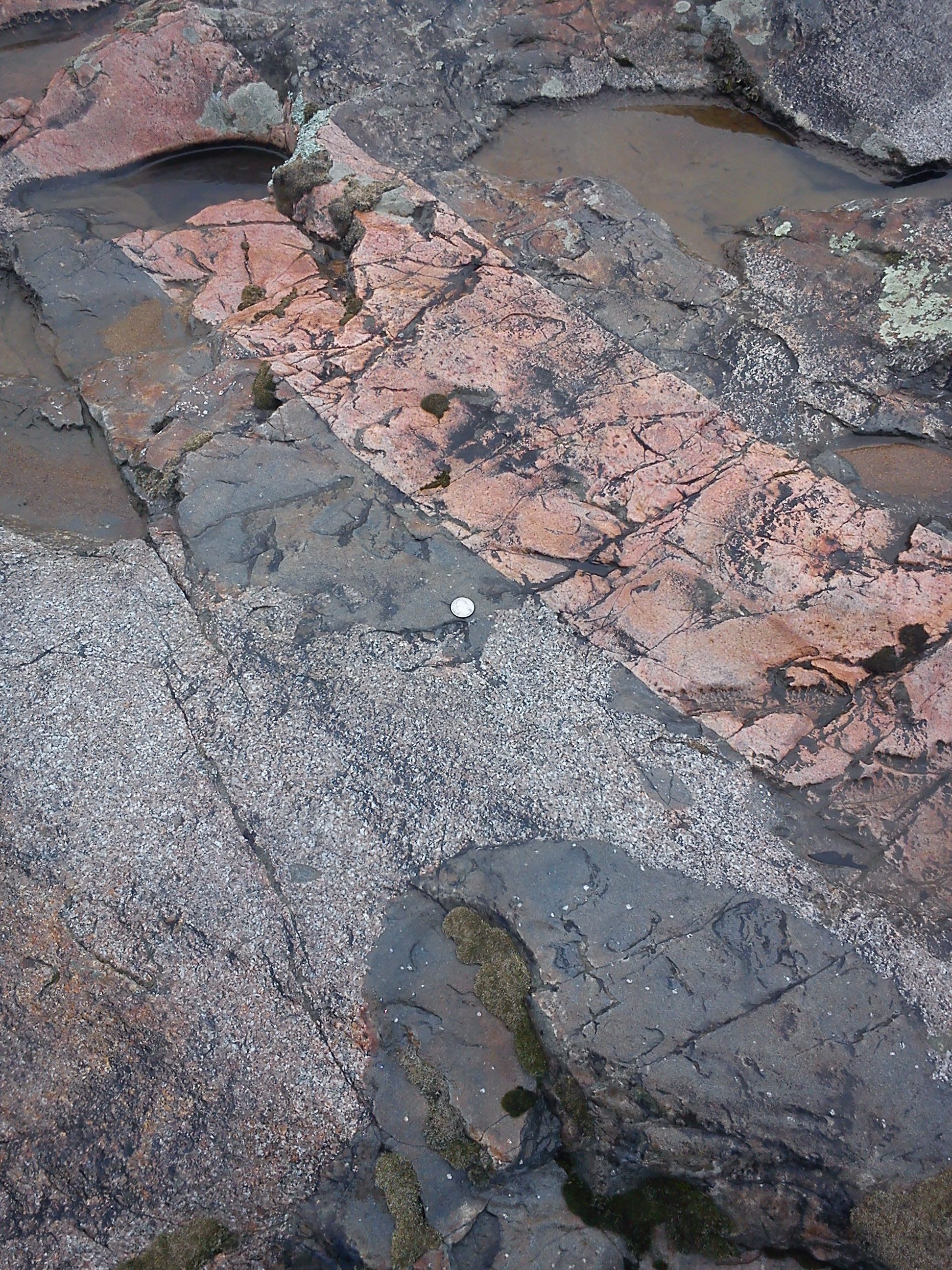 This is a bit of a trick question: all we can tell is that the pink rock formed last, because it cuts across all the other rock types. The relationship between the dark and speckled rocks is...well, complicated.

Both the dark and speckled rocks are part of the Silvermine Granite. If we look very closely, we can infer that they did indeed form simultaneously and are part of the same unit. Small speckles and clusters of white material can be found in the dark rock, and small blobs of the dark rock can be seen in the speckled rock. The dark rocks are mafic enclaves, blobs of silica-poor melt that can't mix with the more silica-rich melt that formed the granite. The parts of the Silvermine Granite exposed at Tiemann Shut-ins contain an unusually large amount of mafic enclaves. In some places in this outcrop, more than 50% of the exposed rock is mafic enclaves! 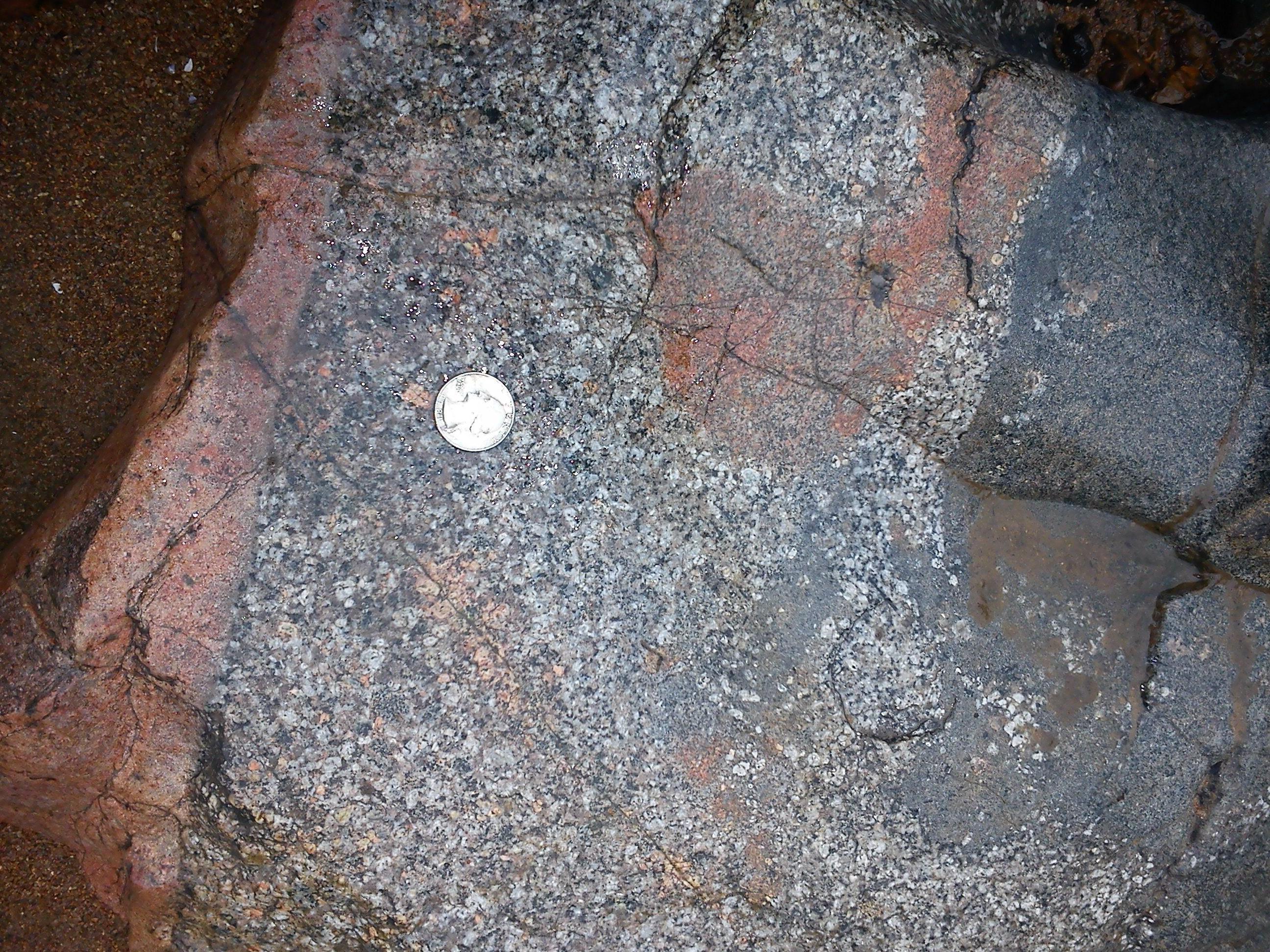 The Silvermine Granite is a lot diffferent from other bodies of granite in the area, which are typically bright pink (such as the Graniteville Granite at Elephant Rocks). Compositionally, it has less silica and a lot more of certain metals like lead, silver, and tungsten. This magma also contained a high load of dissolved gasses, which made the magma more fluid. These are excellent conditions to create orebodies, and one such orebody gave the Silvermine Granite its name. A few km to the east at Silver Mines Recreation Area, particularly metal-rich veins contained so much lead that they directly formed lead sulfide (commonly known as galena). Silver and tungsten are easily incorporated into galena's crystal structure, and the Silvermine's galena contained so much silver that it was the target of mining - not lead! The region contains massive deposits of lead from easily-mined sedimentary rock, making small-scale sources of lead mined from granite an unprofitable proposition. Only the silver made the granite worth mining.

Geochemical studies tell us that the composition of the mafic enclaves are extremely variable, form a trend between that of the Silermine Granite and a swarm of basalt dikes in the area (see Lowell and Young, 1999). This tells us that the basalts, mafic enclaves, and Silvermine Granite are probably related to each other in some way. The presence of two very different, but geochemically-related melts is called bimodal volcanism. The generally accepted explanation for bimodal volcanism is that hot mafic melts originating from the mantle accumulate within the crust. This heat melts the surrounding, silica-rich crust. The resulting silica-rich melt incorporates some of the mafic material, but because the two magma types don't mix very well, the melted rock separates to form a separate magma chamber. The melt that formed the Silvermine Granite probably originated near the deep source driving the bimodal volcanism. So what is it doing so close to the surface? 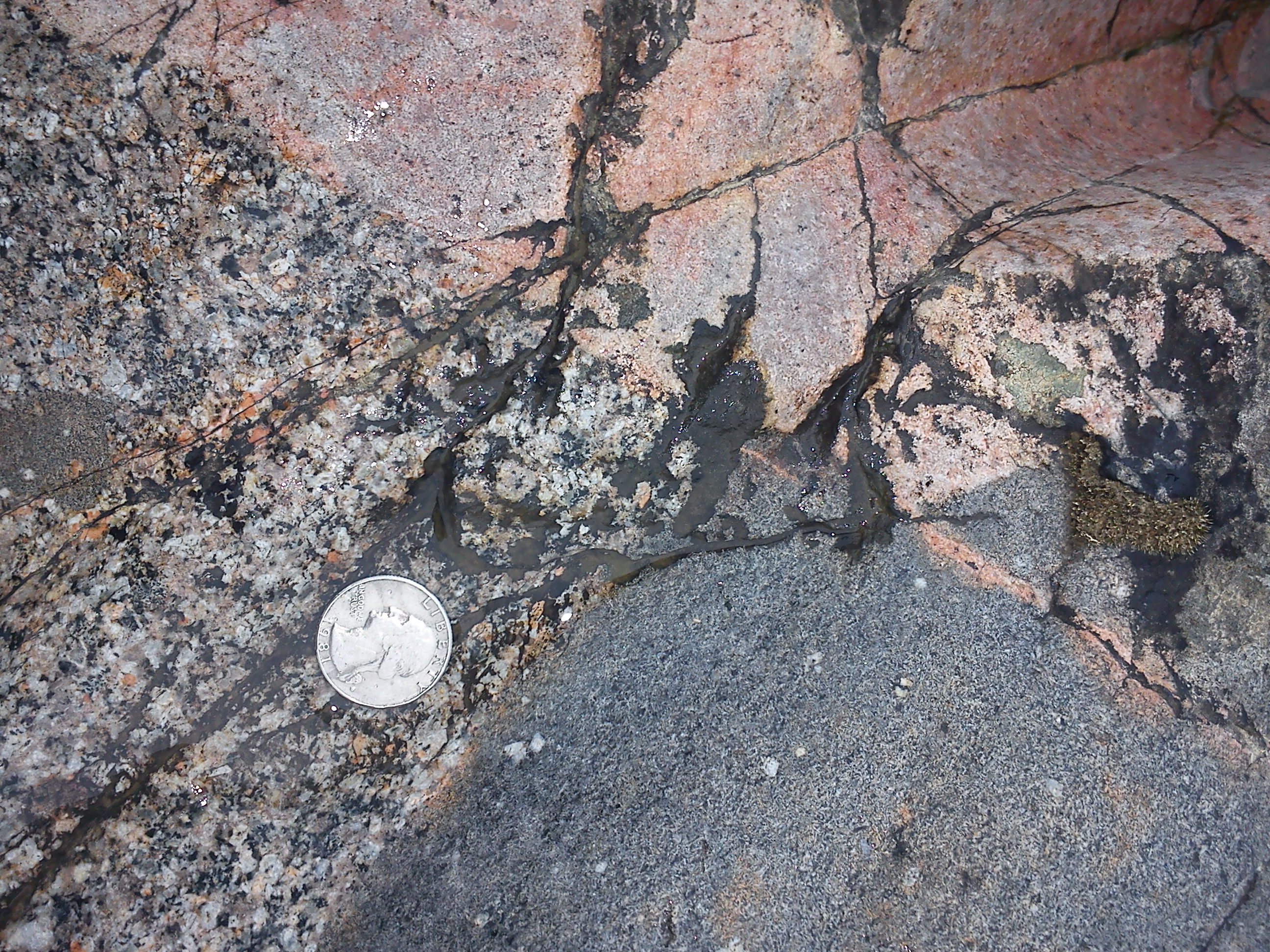 The enclaves' size, variable composition, and presence of subenclaves tells us that mixing within the melt that produced the Silvermine Granite must have been relatively intense. One possibility is that the Silvermine was implaced relatively soon after a major caldera-forming eruption. The Silvermine Granite's outcrop area closely follows the arc-shaped faults defining the southern and eastern rim of the Butler Hill Caldera. As the Butler Hill Caldera's magma chamber emptied, the volcano's floor slumped downwards like a piston. This action not only helps empty the shallow magma chamber, but squeezes deeper melts up and around the side of the collapsing fault block. The release of pressure also helps draw up additional melt from depth, which can follow the faults as an easy conduit upwards. This process has been inferred from other large ashfall deposits, such as the Bishop Tuff in California, where we can actually see the composition of the ash becoming less-silica rich as the eruption continued. 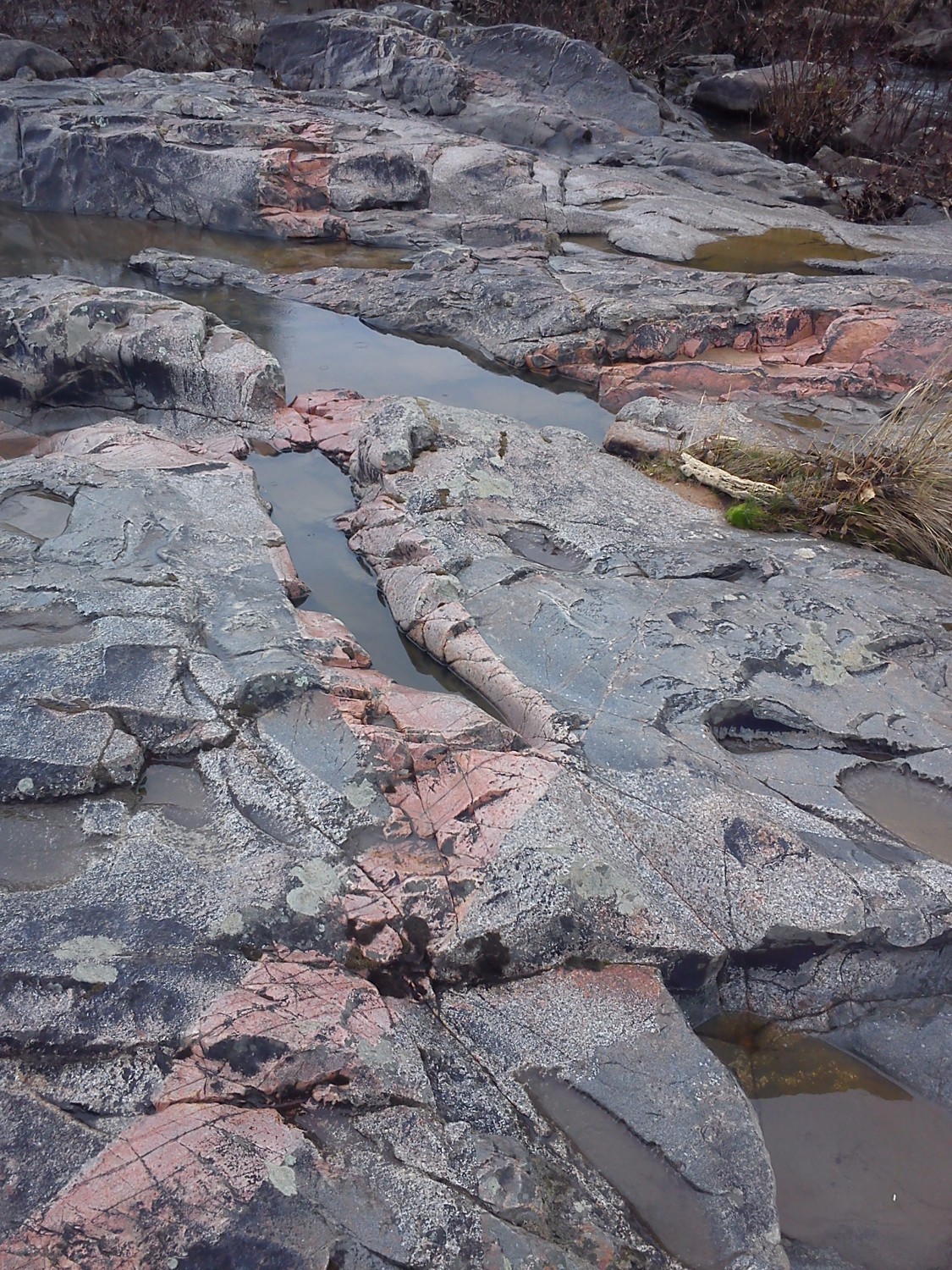 The pink rock is a type of rock called aplite. This is a very fine-grained rock composed mostly of quartz and alkali feldspars which typically forms very late during the crystallization of a granite intrustion. The grains are so fine that the aplite has an almost glassy texture in some areas, indicating it cooled very rapidly. One hypothesis for the formation of aplite is that late in crystallization, the water content in the melt has increased nearly to the point of supersaturation (see Fournier, 1968). If there is a local drop in temperature or pressure, it may cause the water to hit supersaturation, sparking a rapid and final crystallization of the melt.

The sharp boundaries of the aplite dikes and ramrod-straight paths indicate that they formed after the rest of the Silvermine Granite had cooled considerably. A possibility is that the Silvermine had begun crack as it cooled, providing pathways for the aplite to follow. The lower pressure of these conduits then sparked the rapid crystallization of this remaining melt. But in some places on this outcrop, this story doesn't work.

This particularly large aplite dike contains several large mafic enclaves, has a somewhat blobby boundary, and looks a bit speckled. It might represent a transitional phase between the well-defined aplite dikes and the bulk of the Silvermine Granite body itself. Unfortunately, my time to check out this outcrop in much more detail was cut short by a sudden autumn thunderstorm. It's one I hope to get back to explore some day (hopefully with a better camera!)