The "Holey Tour" is an educational field trip originally developed by pioneering planetary geologist Ron Greeley during the late 80s to educate fledgling planetary scientists, and which became a yearly field trip at Arizona State University until his passing in 2011. The tour was designed to show off major surface processes observed to build and modify planetary surfaces, taking advantage of the diverse and densely-packed geological wonders of central and northern Arizona. Its name comes from the emphasis on recognizing the differences between various holes created by explosive volcanism and impact cratering. I participated on a shortened, one-day version of the field trip at the GSA Rocky Mountain/Cordilleran Joint Section meeting in May 2018. This trip was organized by Nadine Barlow, with Chris Edwards, Mark Salvatore, and Jean-Francois Smekens joining in to lead various parts of the tour. Despite the trip's shortened length, it was still an action-packed and exhausting day!

This field trip covers three (and a half) separate field sites, so this field trip has been broken up into three separate parts for easier navigation.

Our day started out with a visit to Barringer Crater (also known as Meteor Crater), a 1.2 km (0.75 mi) impact crater that formed approximately 50,000 years ago. This site is both the first suspected and confirmed impact craters on the Earth, in part due to its association with small iron-nickel meteorites (the Canyon Diablo meteorites), which are found in a strewn field centered on the crater and extending about 5 km (3 mi) in all directions. The presence of these small meteorites led Daniel Barringer (a mining geologist) to conclude that there was a buried mass of iron weighing approximately 91 million metric tons (100 million tons) underneath the crater. Barringer estimated this mass, if found and mined, would be worth $100 billion in 1903 (or $2.3 trillion in 2020). He bought the land and began a futile, decades-long effort to find it, one that eventually bankrupted him. We now know that the impactor was probably closer to 272,000 metric tons (300,000 tons), most of which was vaporized on impact. The meteorites scattered through the desert are likely a smaller piece that broke off shortly before or during atmospheric entry and which exploded some distance above the ground. Barringer's family still owns the site, operating it as a tourist site and using a portion of the proceeds to fund continuing impact cratering research.

The approach to the crater undersells its magnitude; from the road in it appears as a low ridge. Even in the visitor center parking lot, it is difficult to imagine a deep hole on the other side of a low ridge. Much of the reason for this understated appearance is that the highest parts of the rim stand only 45 m (150 feet) above the surrounding plains, and much of this climb is masked by a gently sloping ejecta layer that extends at least 500 m (1650 feet) outwards from the rim. But then you pass through the visitor's center and are greeted by a cliff face overlooking a 150 m (500 feet) drop to the crater floor. The kilometer-wide natural amphitheatre is a sight almost beyond comprehension -- and Meteor Crater is a small impact crater!

Meteor Crater is a type of impact crater known as a "simple" crater. These impacts are small enough that their shape is the result of a "simple" process of impact and subsequent detonation of the impactor as its forward velocity is converted entirely to heat as it comes to an immediate stop (or "lithobraking" as some geologists and rocket engineers like to call it). The explosion blasts out a more-or-less round crater with bowl-shaped walls. This is in contrast to a "complex" crater, where the explosion excavates so deeply that the rock underneath begins to flow upwards due to the surrounding pressure, forming a small peak at the center of the crater. (Some field work I have performed at complex craters can be seen on my Upheaval Dome and Flynn Creek crater pages).

I say that simple craters are "more-or-less" round, because the underlying geology has some influence on their shape. In the case of Meteor Crater, the rocks underlying the site are cut by two deeply-penetrating fracture sets (called joints) that are oriented perpendicular to one another. The explosive force that excavated Meteor Crater followed these fracture systems. Seen from above (here by NASA's Earth Observatory program), Meteor Crater looks more like a square than a circle. 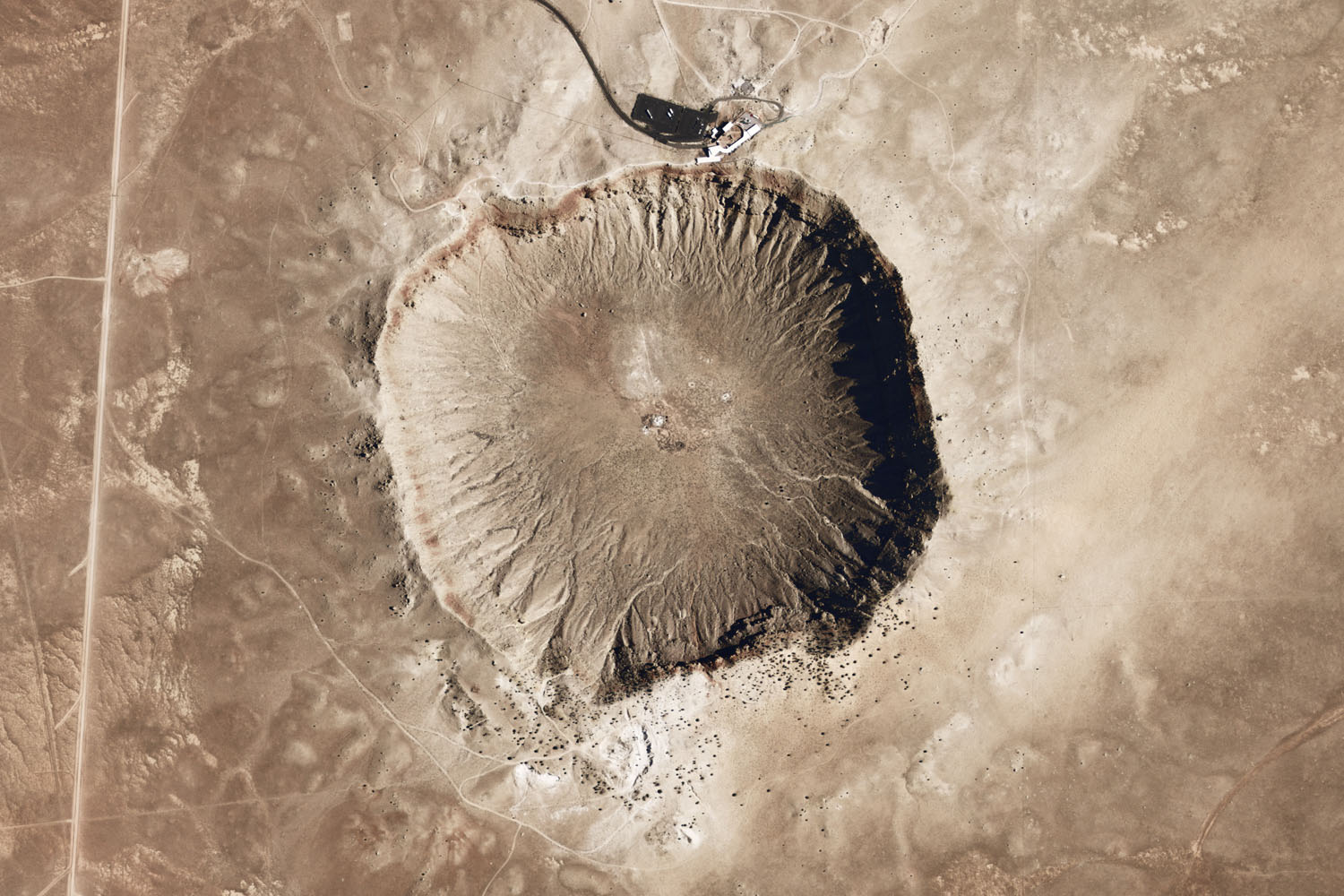 Our tour started on the walk out to the old Barringer house on the crater rim. The ruins sit near one of the highest points of the rim, which provided Barringer a commanding view from which to watch mining operations that occurred during the various phases of the meteorite search. 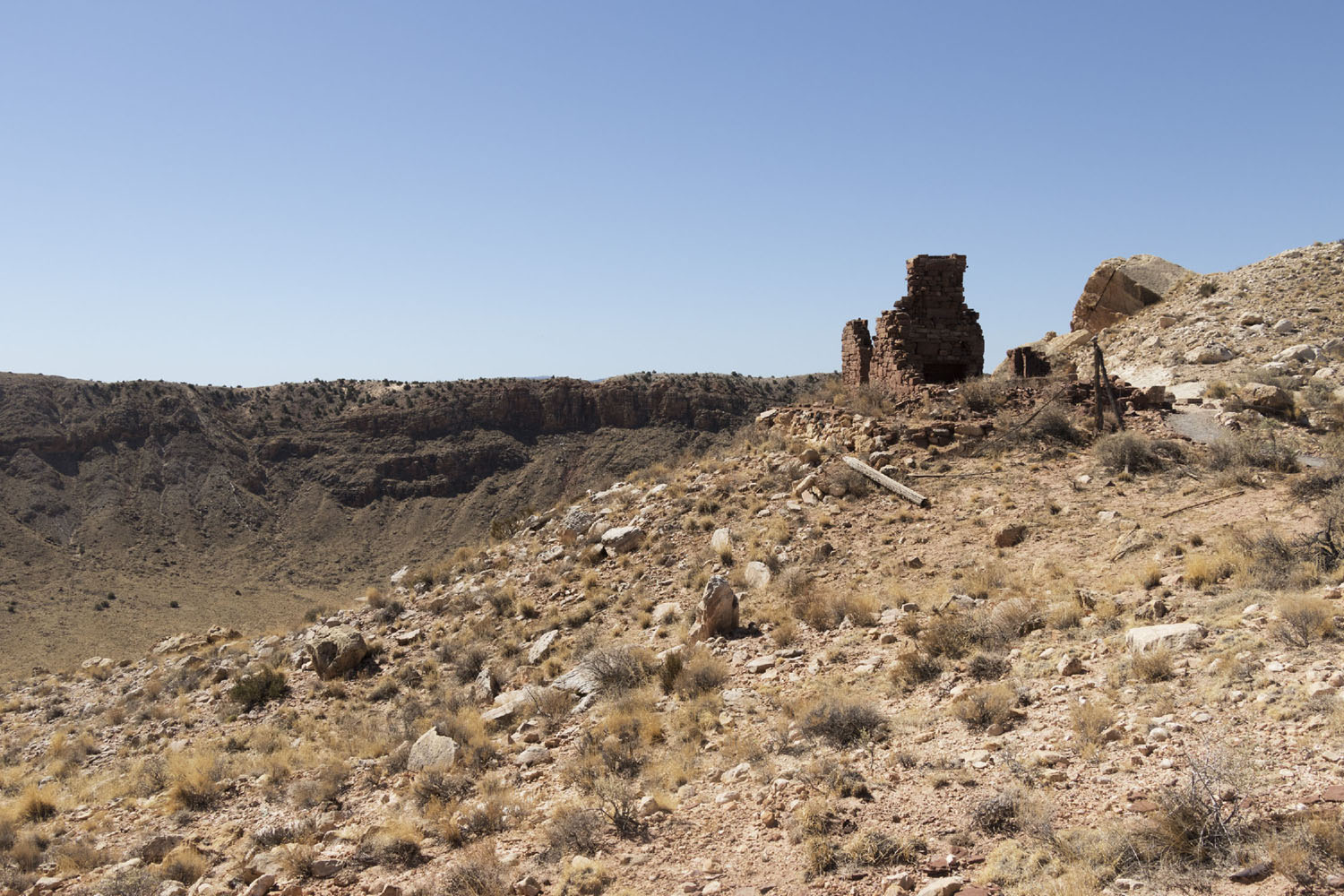 The house was probably built sometime around 1905 (his son's biography mentions that Barringer had not even seen the crater personally as late as 1904). In the early 1940s, it was used by the early meteoriticist Harvey Nininger as a base for fieldwork at the crater, until a 1948 attempt to nationalize the property into the National Park program made him persona non grata at the crater. The house had collapsed by the time Apollo astronauts came to train at the crater in the mid-1960s.

These astronauts were brought to the crater by Gene Shoemaker, who (along with Edward Chao) had confirmed the crater had been formed through an impact. Although this hypothesis had been confirmed through microscopic evidence (small quartz grains that had been transformed to denser, high-pressure crystaline forms named coesite and stishovite), Shoemaker had studied many of the large-scale structures created by the excavation of the crater. His job was to make sure the astronauts were aware of those structures as well when performing geology on the Moon. The astronauts did get familiar with the site - especially a small disused storage tunnel bored into the hill beside the house, which provided shade and a touch of cool air to beat the Arizona sun. 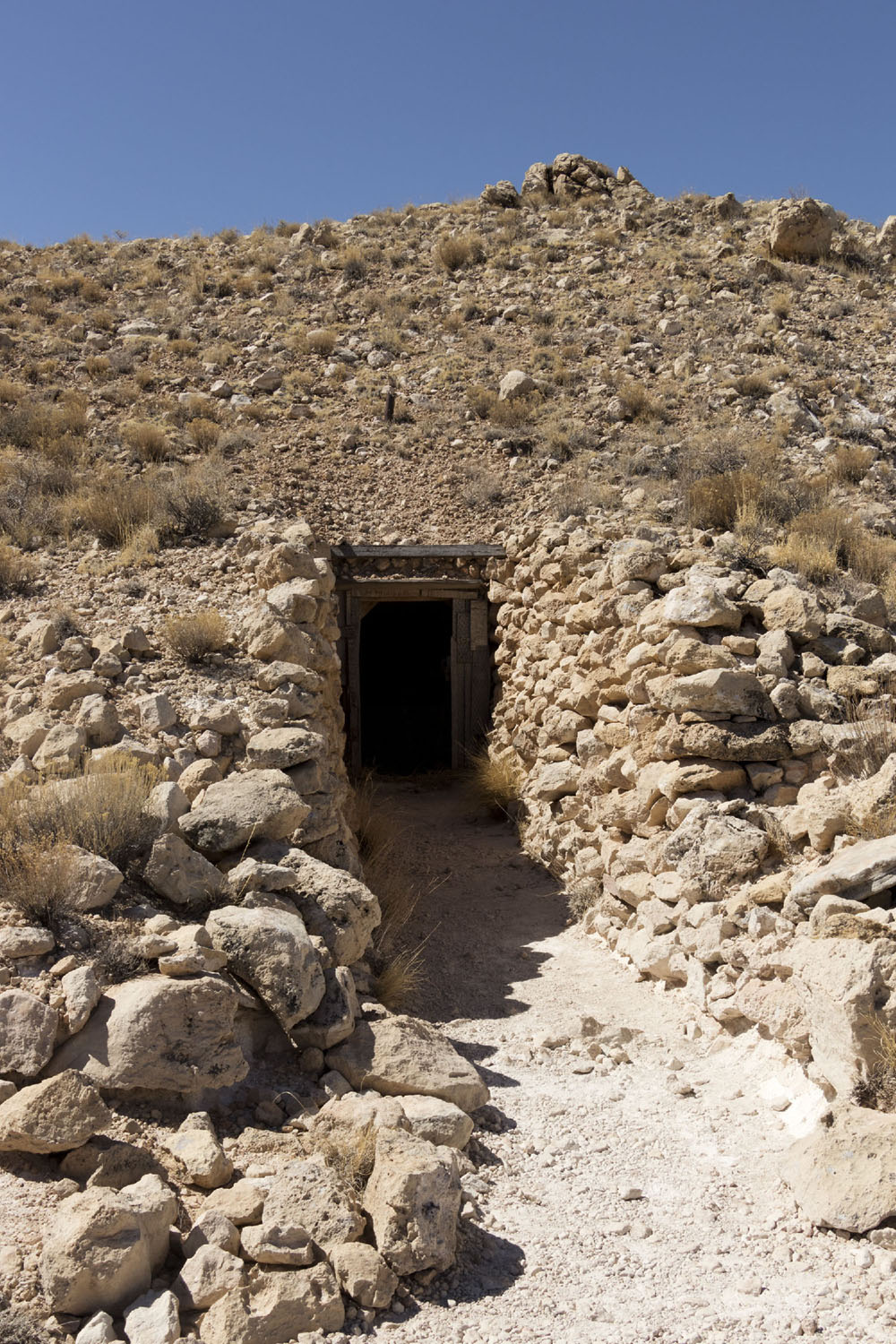 The small rise beyond the Barringer house is called Barringer Point, and is one of the highest parts of the crater rim. This site provides a spectacular exposure illustrating the process of crater excavation. When an impactor penetrates the surface, it initially leaves much of the ground inside what will become the crater undisturbed. The explosion that excavates the crater begins underground blasting the rocks upward and outward. Near the crater rim, the rocks within the crater begin to roll over and fall back to form a fold. Starting from the floor of Meteor Crater, one starts in the Coconino sandstone and walks upwards through the Toroweap limestone, the Kaibab dolomite, and then the Moenkoepi mudstone. A couple of meters after crossing into the Moenkoepi, you walk into the overturned rocks, first seeing a horizon of shattered Moenkoepi rocks, followed by a layer of broken-up Kaibab. 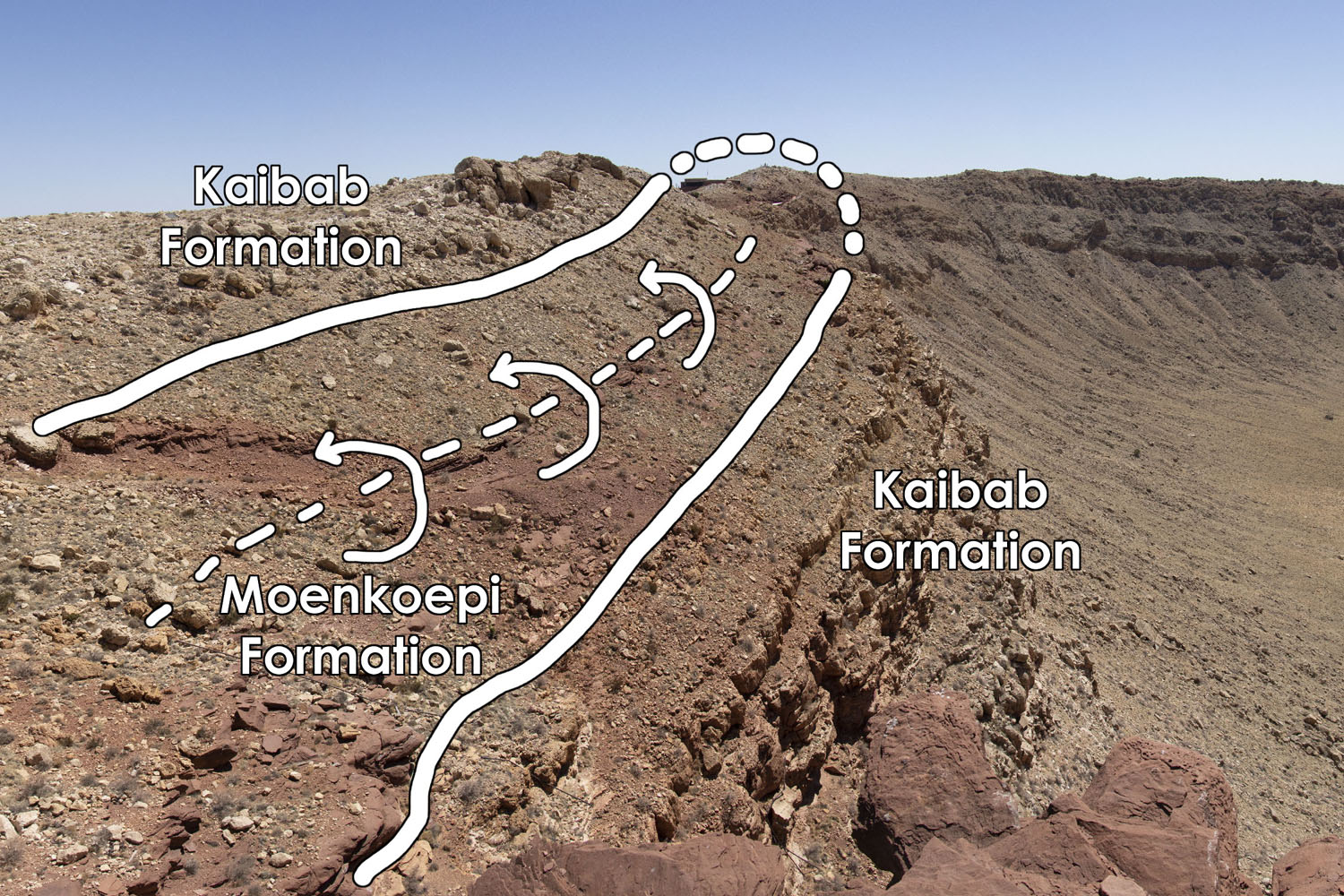 Although this fold could have happened anywhere in the stratigraphic column, it is very helpful to mappers that it happened within the Moenkoepi. The bright red color of this unit strongly contrasts with the more drab yellows of the Kaibab formation. As a result this fold can be traced around most of the crater as a red stripe with a yellow cap around the entire rim of the crater. As we headed out to Barringer Point (with special permission), Nadine Barlow discussed the effects of crater excavation. In addition to blasting rocks outwards, the pressure and shaking also deformed the rock to produce a set of gentle bends in the rock layering. These folds are particularly obvious when looking at the varying elevation of the Moenkopi's base along the crater rim.

Barringer Point is the result of this deformation. It sits near the apex of a bend created by the movement of a ~100 m (300 ft) wide zone of rock that moved upwards and outwards slightly more than the surrounding rock. 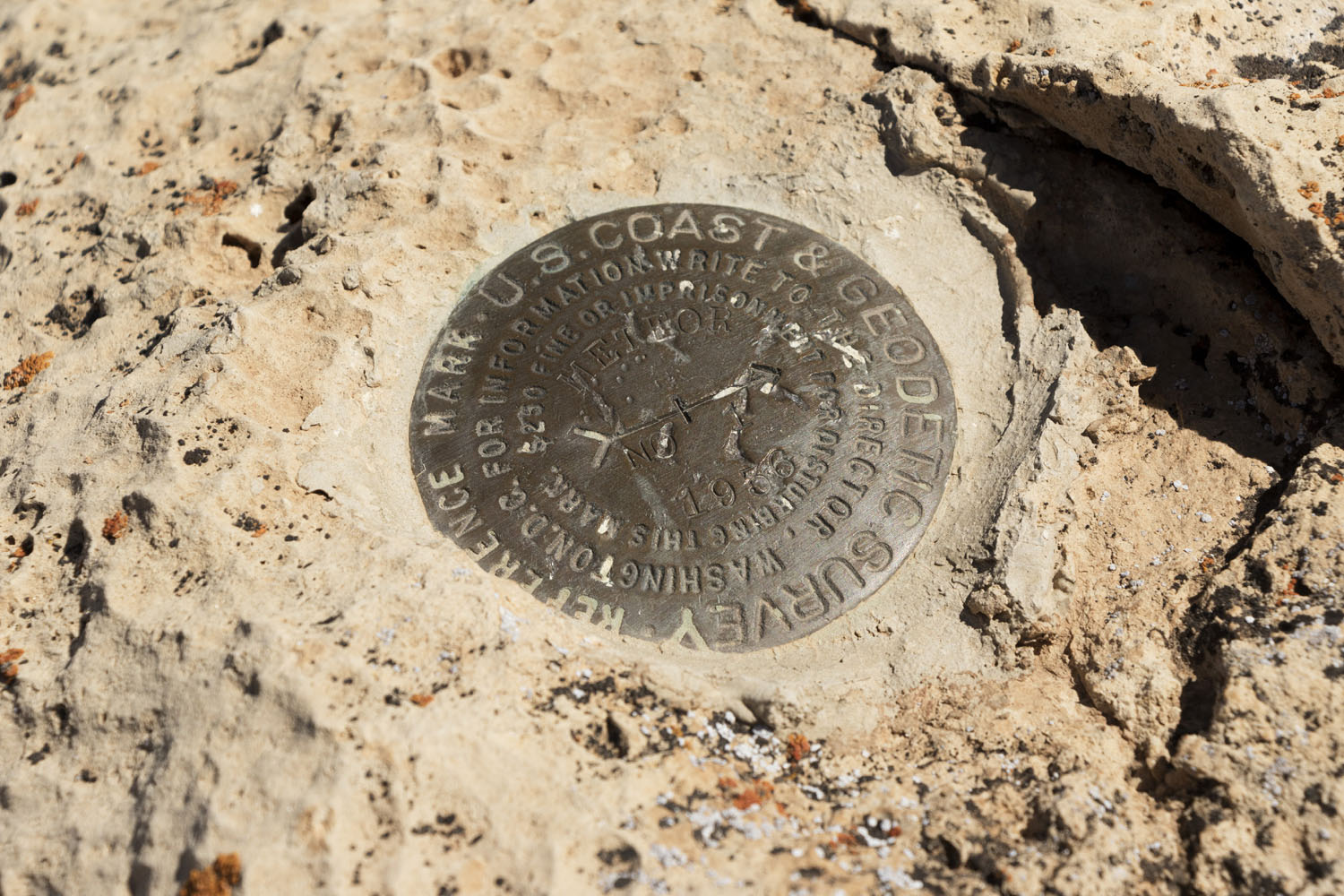 While taking in the view at Barringer Point, we were greeted by a huge dust devil out on the plains. 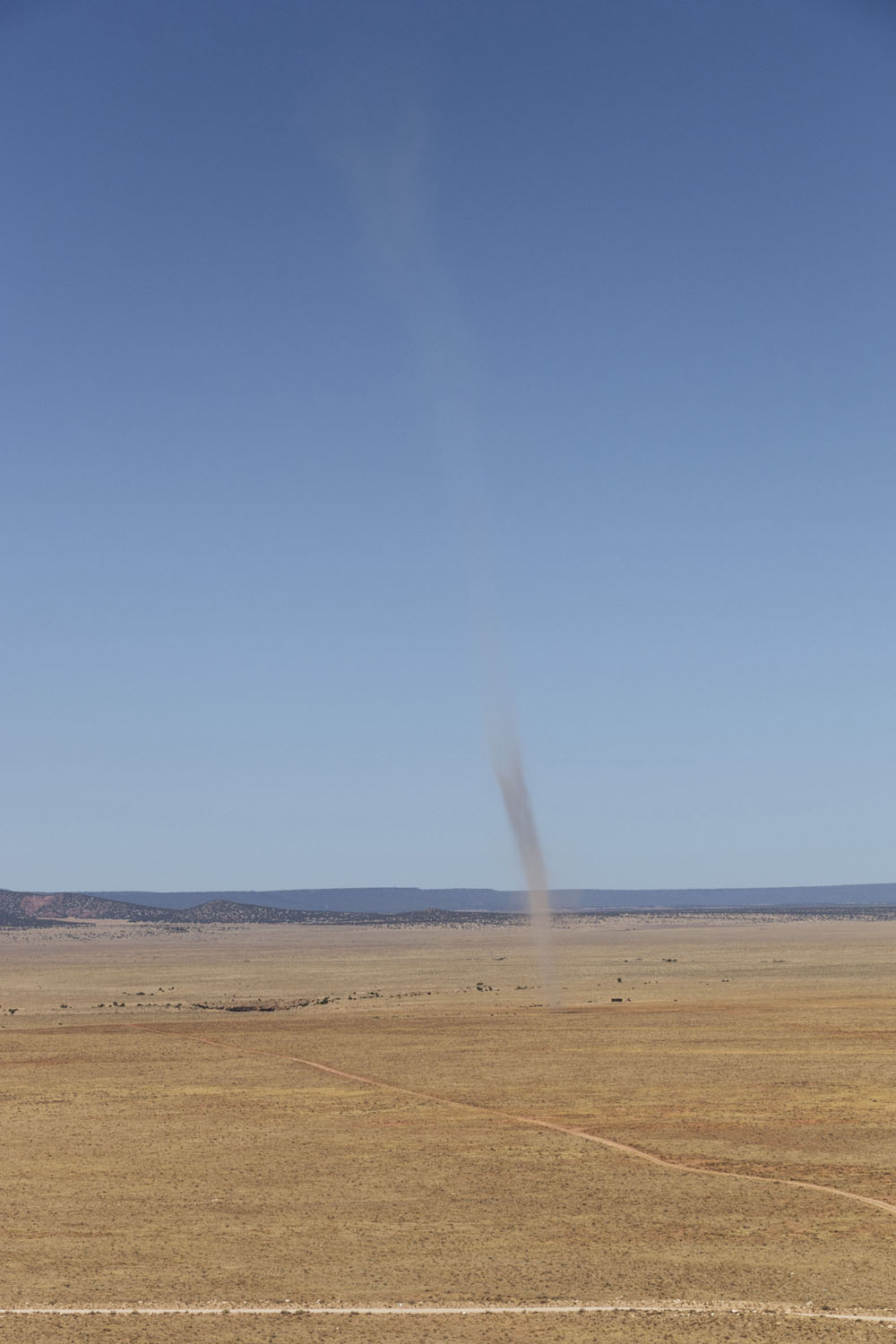 While not part of the Holey Tour, the dust devil did partially fill a gap in the original tour's overview of planetary surface processes: the effect of wind. We are learning that wind and its constant movement of dust has been a huge factor in shaping Mars' overall climate for perhaps the past couple billion years. Dust devils are an active field of study in Martian meteorology, since they provide an observed and obvious route for dust to make its way into the atmosphere. It was with Mars in mind that we sat and watched dust loft several hundred meters into the air before it slowly faded from sight.

After it fizzled, and with a long drive back to Flagstaff ahead, we made our way back to the cars.

Continue to the next stop